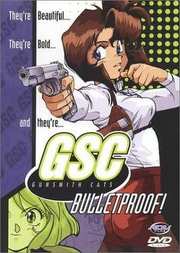 A few months ago, I had a look at Riding Bean, a ridiculous eighties action anime that fell into the classic so bad it`s good category. A daft story and bizarre characterisations were offset by decent animation, attractive character designs and an unprecedented attention to detail. Creator Kenichi Sonoda got another chance at anime glory 6 years later with the spin-off anime. Gunsmith Cats sees the return of Bean`s sidekick Rally Vincent in a central role, with a new hair colour and a slightly more reputable profession.

She`s a little more law-abiding now, having gone into business as a bounty hunter with partner `Minnie` May Hopkins. They also have an arms dealership, with a sideline in customising weapons. While they do a lot of business with the police, there are still a couple of trust issues. Especially as Rally is especially fond of gunplay, while May loves to play with her own customised hand grenades.

There are three OVA episodes on this disc from ADV.

1. Neutral Zone
Rally and May bust a suspected drug runner, Jonathan Washington but they don`t have time to celebrate their good fortune. Washington can`t be charged, he`s more into running guns than drugs, and the ATF don`t have the evidence to prosecute. Anyone who has tried to infiltrate his gang has wound up in a body bag. When William Collins, ATF agent walks in to the Gunsmith Cats shop, they`re about to have a bad day. Soon Rally is being blackmailed into going undercover as a gun dealer.

2. Swing High!
The shoe`s on the other foot. A Russian assassin named Radinov is in town, and top of her target list is Washington. He tries to hire the Gunsmith Cats as protection, and when that fails, he insists that they get his Rolex to his daughter as a memento. But there is something else to this particular watch, and soon Radinov is on the trail of Rally and May.

3. High Speed Edge
Radinov has survived, and she is seriously aggrieved with the Gunsmith Cats who have thwarted her. Meanwhile Collins` investigation keeps running up against red tape, and it soon become apparent that someone within Alcohol, Firearms & Tobacco is playing for the other side. The corruption reaches up to the highest levels, and Rally will learn that an awards ceremony to honour her bravery is just another trap. 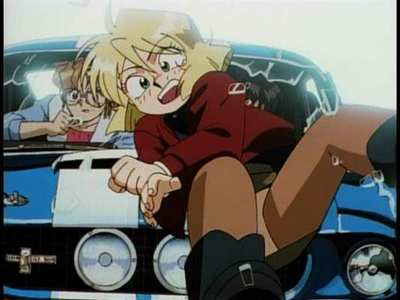 Gunsmith Cats gets a 4:3 regular transfer, although it is an NTSC disc. NTSC seems at first glance to have the edge over the NTSC-PAL anime transfers we normally get in the UK, but a few minutes with the flicker, the jaggies, and the over-saturated colours have me thinking that the slightly smoother animation just isn`t enough.

There are a couple of compression artefacts, otherwise the animation comes across well. The character designs are simple but pleasant to look at, and the sheer detail that has gone into recreating Chicago, as well as getting the details on vehicles and weaponry accurate makes this a high quality OVA presentation. 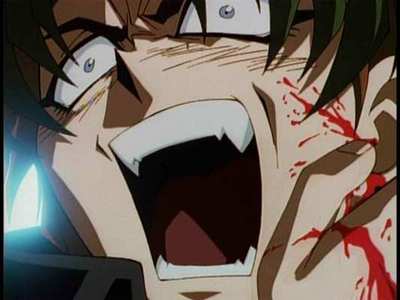 You get a choice of DD 2.0 English and Japanese, along with optional translated English subtitles. The dialogue is clear in both versions, and the simple stereo set up does a good job with the profusion of action sequences. It`s a fair dub, with the main characters sounding better than the supporting cast, but unsurprisingly I preferred the original language track. The music for Gunsmith Cats is really quite good, a jazz soundtrack that is ideally suited to the buddy cop vibe and Chicago setting. 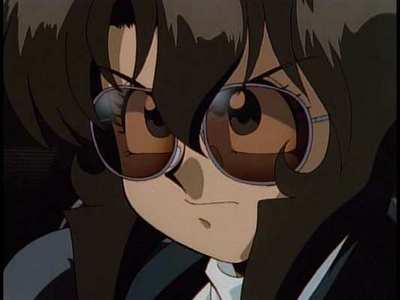 You get a nice selection of extras, far more than usual for the average anime disc. The usual suspects are all there though, animated menus, credit free opening animation, and trailers for other ADV product.

There are 5 minutes of trailers specifically for the OVA episode here.

Most significant is the Making Of Gunsmith Cats featurette that lasts 40 minutes. It`s introduced by one of the English voice cast, and takes a look behind the scenes of the show. There are interviews with creator Kenichi Sonoda, as well as the crew behind the animation. There are also interviews with the Japanese voice actors. All Japanese dialogue is subtitled of course. What really struck me is the sheer amount of research done into the animation. The animators went location scouting in Chicago, met with the police department there, and got seriously familiar with countless firearms and the Shelby GT500 that Rally drives in the show. 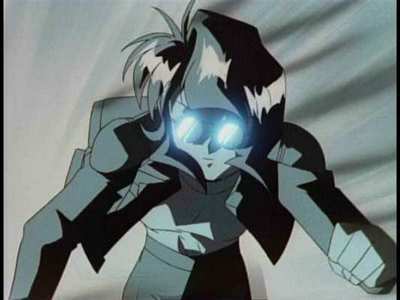 I did have some reservations about this disc, especially after watching Riding Bean, the 1989 OVA from Kenichi Sonoda that introduced the character of Rally Vincent, albeit in a supporting role. Riding Bean was a daft eighties action flick of an anime, the sort of thing that in the real world would star Chuck Norris. It was a film that you laughed at, not with, and if it was exceptionally enjoyable in that way, that still doesn`t make it a good movie. But I had heard good things about Gunsmith Cats, and taking advantage of a convenient sale, I decided to take a chance.

It was well worth it, as Gunsmith Cats takes all that was good about Riding Bean, the action, the energy, the pacing and the attention to detail and turns them up to the max. But it also has a smart story, interesting characters and a degree of intelligence that was missing in the prequel. It`s really a feature film broken into three acts and presented here as three episodes. The director Takeshi Mori characterises them as the gunfight, the car chase, and the one-on-one duel, and each arc can stand alone. It`s just that there is a bigger story going on in the background that strongly ties each episode together, and the show is really more enjoyable in one sitting.

The sensibility is very much that of an American action movie, and in some ways it really stands apart from the usual anime show. With its distinctive soundtrack, I very much get the style and pace of a film like Midnight Run, but the humour and story would be more suited to Red Heat. Another good thing is that the episodes feel very much like part of a larger world, and while the story is satisfying and complete in itself, the temptation is great to look up the Gunsmith Cats manga afterwards.

The story is fun, exciting and thrilling, the characters are well written and entertaining, and the attention to detail is superb. Chicago is brought to animated life, and fans of guns and cars will have more than enough to look at. Riding Bean was a dumb action movie of an anime; Gunsmith Cats is a smart and entertaining action movie of an anime. If you have half a toe stuck back in the eighties like I have, then this anime should be an essential purchase.