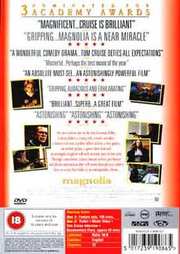 DVD
End of the Affair, The (UK) 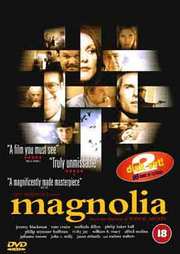 Synopsis:
On one random day in the San Fernando Valley, a dying father, a young wife, a male caretaker, a famous lost son, a police officer in love, a boy genius, an ex-boy genius, a game show host and an estranged daughter will each become part of a dazzling multiplicity of plots, but one story.

Through a collusion of coincidence, chance, human action, shared media, past history and divine intervention they will weave and warp through each other`s lives on a day that builds to an unforgettable climax.

For a film with absolutley no plot this one does pretty well. There is no linear progression or direct storyline but there is a mighty damn fine sense of theme and atomsphere.

What I am talking about I shouldnt be dribbling about the story because that isnt that important.

Video: This disc had one of the best transfers I had ever seen since I first got my player and really impressed me. It was bright, crisp, clear and colourful throughout and really used the format to the max. It looked especially nice when you zoomed in on Tom Cruises nose, which is of course the only reason you bought this film right?

Audio: This film didnt have a huge amount of action or anything so there wasnt much in the way of special audio effects but the soundtrack was pretty good for all the dialogue. The music came through pretty well too. I thought the audio was fairly rockin and worked pretty well through my stereo kit.

Extras: I didnt actually see any of these (I borrowed the disc) but I gather they were pretty good in both quality and quantity. They must have been if they devoted a whole disc for them.

The most beautiful film I saw in the year 2000. A sprawling tale of human interaction that encompasses many intriguing characters, some of whom you will identify with more strongly than others, from the remorseful father on his death bed, to the boy genius struggling against his loss of identity.

The disc features an excellent anamorphic transfer, presented in it`s theatrical ratio of 2.35:1, it really shows the stunning vision of director P T Anderson to it`s full effect. The print is very clean, and is among the better transfers I`ve seen.

The audio is equally as accomplished, with a brilliant Dolby Digital soundtrack. The music of Aimee Mann is a fantastic accompaniment to the on-screen chronicle, from the opening number `One`, to the hauntingly beautiful `Wise Up`. The centre channel is clear, essential for such a dialogue-heavy film, except for in instances when the score is intentionally allowed to drown out the actors to enhance the emotional impact. Good use of the surrounds during key sequences makes this a very pleasant listening experience all round. Word has it that Anderson wrote the film around the music, rather than the traditional way of writing music for the film.

The second disc includes a plethora of extra features. Included are the full versions of the Frank T J Mackay infomercial and seminar, along with the theatrical and teaser trailers. We are also treated to various TV spots, in which the various characters introduce themselves, an Aimee Mann music video (featuring most of the cast) and a long featurette called the `Magnolia Diary`. Basically this is P T Anderson`s video diary of the making the movie and it contains some great insights. It does have a lot to cram in, but it does a good job. Their are also some colour bars to help calibrate your display, and they contain an amusing Easter Egg in the form of some outtakes (Tom Cruise totally falling to pieces during an emotional scene etc). The one thing that`s missing is an audio commentary. Anderson`s other commentaries are great, and really give an insight into the process of filmmaking. Maybe on the `Special Edition` eh?

It would be easy to get carried away and write pages on the emotions that I experienced whilst watching Magnolia, but in the end it would not serve to fully explain the film. I`m sure everyone will take something different from the it, and will identify very closely with at least one character. At approximately three hours in length, Magnolia can seem a tad too lengthy at times, but I cannot for one instant think of any part of this film that I would want to remove. I enjoyed Boogie Nights, P T Anderson`s last film, very much and will certainly be revisiting it after Magnolia, not to mention his first feature `Hard Eight` (a.k.a. Sydney), which is a minor masterpiece.

Much has been made of Tom Cruise`s performance, and while it may be one of his better on-screen appearances, he in no way steals the show. In fact, I can think a at least three actors who do a far better job than Cruise in their roles, including Melora Walters, Philip Seymour Hoffman and Julianne Moore. That said, the whole cast is magnificent, William H. Macy is fantastic, Jeremy Blackman is very promising as the young Stanley Specter, and John C. Reiley is great in his role as the cop. Oh, and Philip Baker Hall is awesome.

Overall, not quite up there with Fight Club or Shawshank Redemption in my list of all-time favourites, but it`s not far behind. It may take repeated viewings to glean everything that can be gleaned from Magnolia, but it is well worth the time invested. Fantastic.
posted by Chris Gould on 18/1/2001 01:54
1 / 10

This movie is billed as `reaching an unforgettable climax` well that is true but for all the wrong reasons! I`m all for character based movies but this movie is completely lacking in direction. It appears to be aimed at a target audence of the director`s ego perhaps! I like to watch films that entertain - this film did but only for a small part of the film. That`s not to say it`s a turkey, just that it was a `drama` which was in desperate need of editing and a more fullfilling ending. Certainly at the end of 3 hours there should have been a greater payoff.

In some places the `dramatic` background music almost drowned out dialog and was totally over the top, lacking in subtlety and inappropriate.

Tom Cruise gives a brilliant performance and because of this each scene he appears in is gives the impression that he is in another movie! I fell asleep half way through this film - doesn`t that say it all! It`s good to see Mr Cruise acting and yes, in this movie, he is brilliant. I certainly can`t fault any of the acting and in some places it is good but a movie is the sum of its parts.

I`d recommend renting but dont buy - it may be your cup of tea but it was over long and over indulgent. Very disappointing and I`m glad I didn`t buy it.

Brilliant film
Very good extras
Fantastic score
posted by ad6 on 5/4/2001 01:32
1This film is the ultimate weapon. Use it against your enemies to bore them to death.

No torture chamber should be without a copy.

In reply to the eejits who have rated this film so poorly (richard73, erectionetc etc). Do you want everything in your life explained to you & wrapped up into neat little packages? That is not what life or great films are about. Work things out for yourself godammit.
posted by bill newton on 1/5/2001 02:47
9 / 10

I loved this movie the first time I saw it. But I agree that, if you`re not in the mood, you better watch it another day or you`ll find it boring.
A story with no main character, not linear, the soundtrack`s lyrics are part of the movie (that`s why sometimes it goes over dialogues...). Everything is brilliantly interlaced. Things that, in a way, reminds me of old time movies. A "one man" movie? Sure! A movie like this can only happen this way. Congratulations P. T. Anderson for the ability to realize it.
It is a "life as it is" story. Does everything in life needs an explanation? If so, be carefull, because you`ll be frustrated until your death.
Tom Cruise can act! Why don`t he do it more times? His best performance is on the second disc, on the extras. Amazing. The color bars hide lots of funny things. Use the ff.
The transfer - One of the best. Deep blacks, sharp, well defined, colors as they were supposed to be on each scene.
The sound - A film like this never require an ultra audio. This one is very good, crystal clear, channels well defined.
Extras - There are some, but I expected more interviews, behind the scenes, deleted scenes. That`s because the film is so rich that you`ll always want more.
I like action movies, but I can`t live on them exclusively. If you like to see more than bumps, jumps and hits, if you sometimes like to see relations being shown in an interesting cinematographic way, go for Magnolia. It is a beautiful movie about relations with others and theirselves. Won`t say that you`ll be a better person after it, but it`ll certainly stay in your mind for some time after. It`s "cinema" in a very special way. And a nice experience.
posted by JosÃ© Azevedo on 25/7/2001 07:12
10 / 10

After watching Magnolia for the fifth time in as many days, I can honestly say that it is a masterpiece. I can`t seem to remove it from my DVD player!! The film is wonderfully written and superbly directed. All the actors could easily have been up for oscar nominations. Those who stood out were Tom Cruise, Melora Walters and especially John C. Reilly. What a performance from the Jesus lovin` cop!
The music from Aimee Mann really cathes the mood of the film. I can`t help but sing along to each and every one of her tunes. The soundtrack is completed with Jon Brion who cannot be faulted.
The extras are limited but the quality does shine through. The documentary is very impressive.
Overall, this film and DVD Box Set has earned its rightful place in my all time top five favourites, and I believe it can never be replaced.
Special Thanks to P.T. Anderson.
posted by Cadence on 25/9/2002 19:20
9 / 10

Magnolia is about lifes regrets and forgiveness. Several different characters lives of pain and misery intersect in its storyline keeping it interesting to watch.

The beginning of Magnolia starts off with stories of suicide and murder which goes directly into the credits. Several different stories start to unfold and all seem fairly normal. But by the time you reach the second half of the film it is much more emotional and and painful. Every character is in some form of despair as they reach their awful conclusions. The films meaning is very important and deals with being able to forgive others and forgive yourselves for the mistakes you`ve made. Nobody`s perfect and regrets will come throughout our entire lives.

The DVD is very sharp and looks great throughout.

The films sound is very good especially when it rains. The soundtrack is great.

The features for Magnolia are fairly good but not great. They have quite a few options and features in this DVD but most of them aren`t as appealing as they could be. Quite good compared to the average dvd though.

Magnolia has an extremely good message and meaning to it. Great performances by Tom Cruise, Julianne Moore, and everybody else. All the actors were fantastic and the film was creative and unusual. Very good movie overall. Definitely worth seeing at least once.
posted by Aaron Arneson on 11/2/2003 00:41