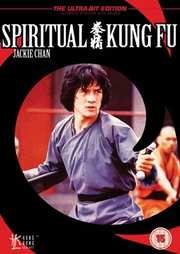 Filmed before, but released just a month after his international breakthrough `Drunken Master`, `Spiritual Kung Fu` sees Jackie Chan playing Yi-lang, a tough and rowdy, yet undisciplined student at a Shaolin temple. When intruders break into the school and steal a book containing the secrets to mastering a deadly and long outlawed martial art, the chaos awakens a group of spirits from within the temple`s belly. Yi-lang is the only student brave enough to face the ghosts, and he alone is taught by them a counter-technique to that stolen by the intruders, and one which must be put into action to protect the temple.

The DVD is another foray into Jackie Chan`s early career from Contender`s Hong Kong Legends label. 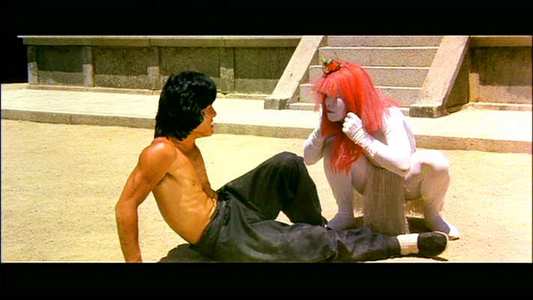 Anamorphic 2.35:1, but sadly not in the sort of condition other HKL releases can boast of. There has been restoration work done, and admittedly it has reduced many of the flaws apparent in the ghastly original print (as seen in the bonus material), but there`s still plenty of wobbling, flecking, faded colours and the odd unsightly occasions of green maculation (which looks like someone splattered their limeade on the negative), although edge enhancement has been kept to a minimum and a swift glance at the original pre-restoration print shows you how much worse things were before. Where the new life breathed into this creaky old print is most noticeable is in the lack of intrusive grain, dirt and scratches. A shiny bonus point for effort, nonetheless. 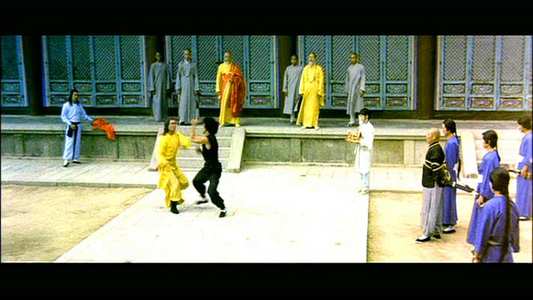 HKL are nothing if not inconsistent. No original mono track this time (or rather, re-encoding of the original mono into two-channel), only badly upmixed Dolby Digital 5.1 in native Cantonese and the obligatory English dub. Re-engineered audio on old Hong Kong flicks is a divisive subject; you either really, really hate it, or can grudgingly bear it, but wish they`d actually put the effort in to giving the old dog a bit of aural flair. Those who fall into the former category will be glad to hear this is mono in everything but name, with everything funnelled through the middle. Both tracks are fairly fuzzy, with harsh sounds showing up the budget ADR equipment of the day, although they`re completely audible; just not great quality. 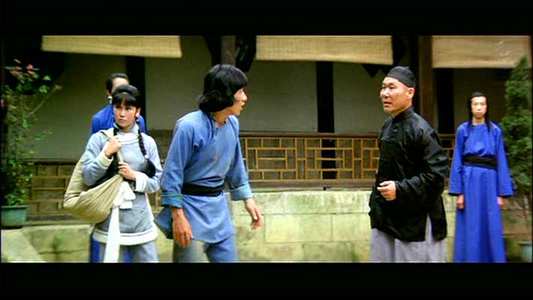 `Restoration: Before & After` is a comparison of the pre-freshened print and the DVD transfer. It lasts for 2-minutes and runs several scenes from the film in which the frame is halved vertically, with the old on the left and the new on the right. While you can clearly see the improvements made - particularly how much of the staining effect has been removed - it`s hardly a jaw-dropping achievement, and you get the impression the feature`s raison d`être is a case of showing those disappointed in the transfer`s quality that they should be thanking their lucky stars it wasn`t so much worse. 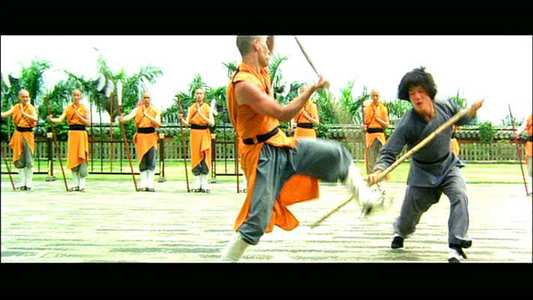 As a point of reference, think of `Spiritual Kung Fu` as any other underdog fight film where the hero hones his craft with an aged master before putting it to use on some real bad dudes at the end, only with ghosts instead of wisened old geezers; it`s `Kickboxer` with Casper, `Rocky` with wraiths or `The Karate Kid` without the tiny little Japanese man, but with some badly FX`d spooks instead. Of course, it`s not nearly as good as those films, with a fairly routine kung fu narrative injected with a dose of the silly. It`s more or less a kung fu farce, and the campness is evident in not only the tutu wearing ghosts (who all bear an uncanny resemblance to a young Toyah Wilcox) but in the gratuitous `comedy` performances and the ridiculous story. Even most of the chop-socky looks over-rehearsed and tired (bar a rather splendid scrap where our hero fends off a group of staff-wielding warrior monks with a pair of tonfa) and not a patch on classic Jackie Chan when he gets going. We do finally get to see some of Chan`s comic timing and rubber-faced expressions indispersed with the fighting as he tries out his slapstick shtick, but the great man`s talents are all but wasted in this rather laughable effort that makes `The Tuxedo` worth watching for the action and story, not just Jennifer Love Hewitt`s mother dumplings alone. Only for the Jackie Chan completist with money to burn.