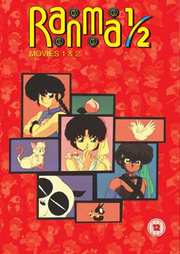 All is well at the Tendo residence when from out of nowhere, a Chinese girl named Lychee appears, seeking revenge on Happosai for a broken promise made since her birth. Things get worse when Kirin and the Seven Lucky Gods appear and abduct Akane to take as his wife. Ranma and the gang must travel to Nekonron, China, and save Akane from getting married to Kirin.

When poetry-spouting swordsman Tatewaki Kuno invites Ranma & Co. for a jaunt on his new luxury yacht, the last thing the group expects is a sudden storm to shipwreck them all on a deserted island. However, fixing the boat to get home soon becomes the least of their worries, as all the young girls in the group begin to disappear. As it turns out, they`ve been bride-napped by Prince Toma, the youthful ruler the floating island, Togenkyo. Because of a magical spring that turns anything it touches instantly male, would-be bridegrooms have to kidnap girls` and in this case, Ranma`s reluctant fiancée Akane is one of them! Now, in order to rescue the girls (and get his hands on that magical water, which could cure his own shape-changing "problem"), Ranma must enter an anything goes martial arts bride-off which includes events such as "survival flower-arranging" and "obstacle-course cooking." Can Ranma (now in "disguise" as a girl) beat scores of other kidnapped concubines, win the contest, rescue Akane and get the magical Togenkyo water... all while wearing a push-up bra and three-inch heels?