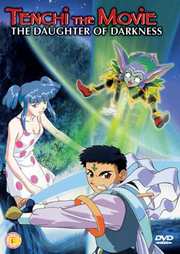 Front Cover of Tenchi Muyo: The Movie Daughter Of Darkness

Review of Tenchi Muyo: The Movie Daughter Of Darkness

At last MVM get around to plugging a small hole in their Tenchi output by releasing the second Tenchi movie, Daughter Of Darkness. They have already released the first and third movies, as well as the first two OVA series. That of course leaves some massive gaps for UK Tenchi fans, with the Tenchi In Tokyo, Tenchi Universe, GXP and Pretty Sammy series yet to debut on these shores. Given that these licenses are held by different companies in the US, there`s no guarantee that MVM will even acquire the licenses here, or if these series will ever even see the light of day at all in the UK. But I`d say it`s a pretty sure bet that the most recent third OVA series will be released at some stage, as it leads on directly from the first two series.

This movie though is a perfect example of the limitations of a minority genre DVD. Typically for English language versions of anime, one country (usually the US), will buy, translate, dub and release a series, and distributors in other regions will sub-licence that version. The DVDs that we do see here will usually be identical to those releases in all but the smallest of details. It`s cost prohibitive to go back to square one each time a new series is licensed, as the numbers involved are just too small. It usually isn`t a problem in the UK, other than a moan about a poor NTSC-PAL conversion. Once in a while though, a title appears that makes you wish they had gone back to square one. While the second Tenchi movie is coming out in 2007 in the UK, it has been available in the US for almost 10 years. 10 years ago, most people watched DVDs on PCs, 10 years ago, the average American loathed widescreen because the black bars at the top and the bottom of the picture wasted one third of the screen. This legacy haunts Daughter Of Darkness.

If you`ve read the other Tenchi reviews on this site, then you`ll be familiar with the set-up. Tenchi Masaki is a hapless teen that through circumstance has wound up sharing his home with a bevy of alien beauties, all of whom lust after him. Fortunately Tenchi is the most rare of male teenagers, libido free, otherwise the show would be in a completely different genre, and the franchise would probably be a whole lot shorter.

The story begins one midsummer when a teenaged girl surprises Tenchi by claiming to be his daughter. The accompaniment of a space-time disturbance and a quick DNA test appears to confirm this strange development, and Tenchi`s daughter Mayuka, although suffering from amnesia obviously has strong feelings for him. The addition of this new female element to the household causes havoc among the residents, and no little jealousy. But former space-pirate Ryoko harbours an irrational dislike of the new guest that goes beyond her competing for Tenchi`s affection. Her suspicions appear to be confirmed when Mayuka starts behaving oddly, and inappropriately towards Tenchi. This is all part of a vendetta between the Jurai Royal family and a malicious imp named Yuzuha, and the truth lies with Tenchi`s grandfather Yosho. 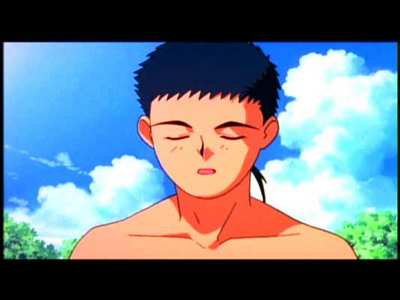 The most obvious sign of the disc`s age is the 1.85:1 letterbox transfer. That aside, the image isn`t bad, clear and colourful throughout and with only a hint of softness to proceedings. It`s also apparent from the off that the animation is larger scale than the OVA, with a touch more fluidity and scope. It very much feels like a movie and not just a double length episode. 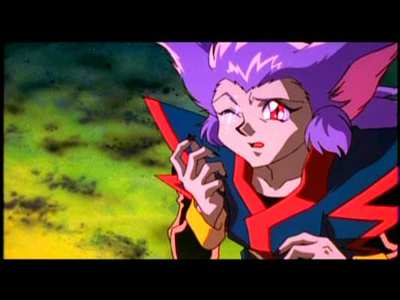 You get a choice of DD 5.1 and DD 2.0 soundtracks in both English and Japanese. The surrounds are put to limited use, there`s some nice ambience and a bit of separation, but it`s nothing special. The dub isn`t one of my favourites, I don`t like the English voices for Ayeka and Ryoko one bit, so as usual I opt for Japanese with the translated subs. The music for the film is exceptional with some hummable themes to liven things up.

This does mean that I can`t zoom the image in, as the translated subtitles disappear from the bottom of the screen. Watching a small image surrounded by an ocean of black isn`t the most edifying of experiences, but I managed to enjoy the film regardless. To add insult to injury however, the HOH subtitles that mirror the English dub are zoom friendly. They are also noticeably altered from the translated subtitles, enough to make a difference to which version you watch. This is very much a disc designed for watching on a 4:3 set.

The legacy of the Region 1 disc pops up again here, as although not listed on the specifications, there are Japanese subtitles for the film, again not zoom friendly. 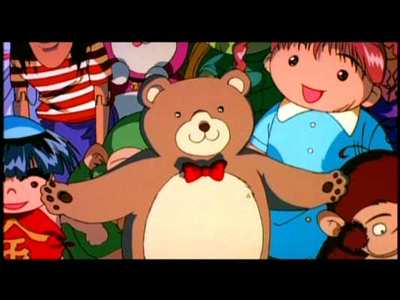 The usual jacket picture and animated menus that grace many an MVM disc are here; this time joined the film`s theatrical trailer, promo trailer, the original Japanese ending and trailers for Le Portrait De Petite Cossette and Saiyuki Reload.

The one feature of interest on the Region 1 disc, the Tenchi encyclopaedia, is noticeably absent here. 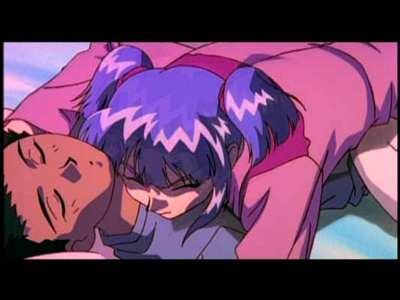 Your average Hollywood blockbuster nowadays can expect a digital lick of paint every couple of years before being re-released with added bonus features and so on. Not so with minority interest titles like anime, which just don`t have an extensive enough consumer base to support it. Even so, sprucing up the antique Daughter of Darkness disc so that it could conform to our 16:9 society wouldn`t have been amiss. Just tweaking the subtitles so that they were zoom friendly would have made a great deal of difference. As such, the belated release of Tenchi 2 doesn`t feel like a flagship release from MVM, rather a clearing out of the back catalogues with little fanfare, such as the Twin Signal and Gestalt releases last year.

It took me a couple of minutes, but I quickly found myself at ease with the disc although I did find it a tad more satisfying to watch on my 4:3 PC screen, despite the pain in the neck it engendered. The film itself really rewards Tenchi fans best of all, those who have a familiarity with the characters and the back-story, although it stands well on its own. Unlike the average TV to movie adaptation, it doesn`t try and cater to those fans by ensuring that all the characters get sufficient screen time, instead it sets out to tell the story first and foremost. That does mean that characters like Ryo-Ohki, Mihoshi and Kiyone (Mihoshi`s Galaxy Police partner who appeared in the first film and the Mihoshi special) get relatively short shrift. The story concentrates more on Tenchi, Ryoko and Mayuka, while Sasami and Ayeka make significant contribution to the plot.

The story is a familiar one, especially if you have seen the second OVA series, where the nefarious Doctor Clay attempts to infiltrate the Masaki household with a clone of Ryoko. Here it is Yuzuha who wants to wreak vengeance on the Jurai, but her methods of infiltration strike a much more personal and emotional chord with Tenchi and the girls. The film is quite similar to the series though, in that it blends comedy and melodrama well, sustaining a light feel throughout, but giving enough of an emotional kick to connect with the viewer. What makes it work is that Yuzuha is no stock villain, and it`s possible to empathise with the reasons she is doing this. There is a reflective melancholy to the character that makes the ending feel bittersweet indeed, but fortunately the coda sends things off on the right note.

The second Tenchi movie is a gift for fans, more of the same blend of light-heartedness and emotion that made the OVA such a draw, although justifying the movie appellation, the story is larger and more personal than just a couple of episodes tacked together. It`s enjoyable, but this disc has seen better days and it`s not the ideal place for newcomers to start off with.