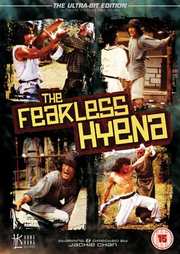 The New Year signals new directions for Hong Kong Legends, and this with Hand Of Death are the first in their new Ultra-bit range. This on the surface promises something akin to Superbit, but with more… bits. In practice this means that on this disc at least, extras are largely absent, while the image quality is improved. Given HKL`s reputation for presenting Hong Kong cinema to a high standard, that`s no mean achievement.

Fearless Hyena`s story is perhaps not the most unique in kung fu cinema. Heng Lung is taught kung fu by his grandfather, but warned never to use it. Being a brash and bold young man, this is a stricture that is impossible to follow. His grandfather`s words of caution take on tragic meaning when the villainous Yen learns of his existence. Yen has been travelling the country, eliminating kung fu masters in order to gain personal power, and he`s quick to do away with Lung`s grandfather. Distraught, he vows revenge, but before he can face Yen, he has to complete his training. Fortunately there is a crippled kung fu master in the vicinity. 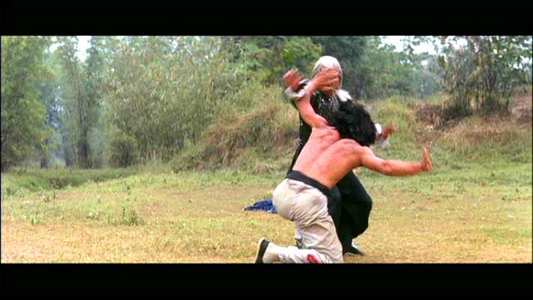 The 2.35:1 anamorphic transfer is crystal clear. There are no signs of digital artefacts, and aliasing and edge enhancement is kept to a minimum. It does mean that the flaws in the print become even more apparent. This print as usual comes from Fortunestar and has undergone the typical restoration process, resulting in a clear, clean and stable print. However, the vestiges of print damage and age are apparent, one frame carefully glued together flashes by in the first half hour, and 20 minutes from the end there is a minor flicker, as occasional yellow stained frames go by. It`s ironic that the better transfer only serves to highlight the signs of age. 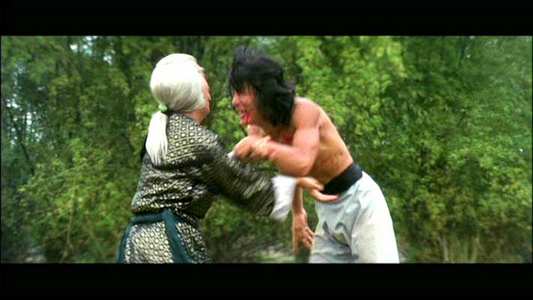 You get a choice of DD 5.1 Cantonese and English, as well as DD 2.0 Cantonese mono with English and Dutch subtitles. I could stomach maybe 10 minutes of the English dub before turning it off. The Cantonese surround is very disappointing, with hiss, buzz and rumble masquerading as ambience, with the occasional bird tweet thrown in. Higher frequencies sound distorted and the problems are variable from scene to scene. At its best it just about passes muster, but in the worst of the outdoor scenes, it`s unbearable. I eventually gave up, and switched to the mono track, which while obviously flatter and front-focussed, lacks any of the distortions and is clear throughout. 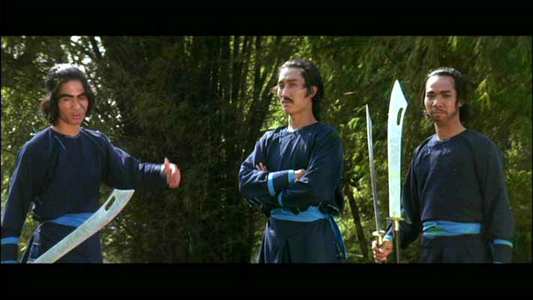 Animated menus and trailers are pretty standard for an HKL release, and notable is a trailer for the New Police Story, coming out early next year.

HKL discs have seemed pretty barren over the last year, following the departure of Bey Logan, who can now be heard commentating for Weintein`s HK releases in Region 1. Of course there are still a few Bey Logan commentaries in the can for some HKL`s unreleased titles like Hand Of Death, but on the whole the occasional featurette has been small compensation. This disc has no featurettes at all, but it does mark the return of the audio commentary. Teaming up on this disc are Andrew Staton and Arnie Hayirlioglu, writers for Martial Arts Illustrated and Impact Magazine. Comparisons would be unfair, as Bey Logan commentaries are legend. Andrew and Arnie are a little indistinct at first, and stumble over the first few comments. But after ten minutes or so, they settle down and find a rhythm. It turns out to be a nice informative, interesting and above all entertaining commentary. It`s a promising start for the two, and hopefully they`ll improve over the next few releases. 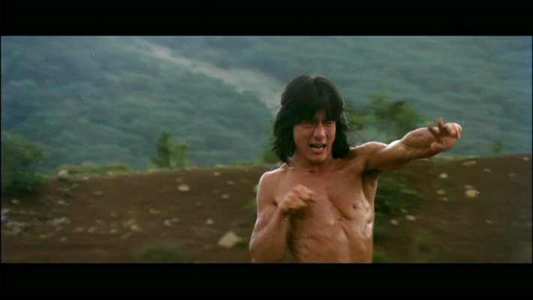 I`ll have a standard period kung fu storyline please, with a side order of comedy. If you are looking for nuances in narrative or award winning acting performances, what are you doing clicking on a 1979 kung-fu movie review? What Fearless Hyena does offer is a chance to see Jackie Chan`s directorial debut, to see him hone his kung-fu comedy skills and develop his classic underdog character.

The action is excellent, with Jackie in his prime and with some wonderful fight choreography. Conspicuous by their absence however are the hair-raising stunts; this is traditional kung fu, tweaked with a healthy dose of comedy. Indeed the first half of the film is devoted to Jackie Chan wandering in and out of trouble, abusing the kung fu skills that his grandfather taught him in secret. It`s all about earning some money for his grandfather, but the character does come across as a prankster, too cunning for his own good. It isn`t exactly the good-natured character we usually see. There is a brilliant cameo from Dean Shek as a second hand coffin salesman to look out for, and when Jackie gets a position as enforcer to a petty criminal who`s setting up his own kung fu school, there`s a chance for some fun with costumes.

All bets are off when Yen shows up, and we switch back to dead master, student on the road to revenge mode. And as usual the student has to learn an elaborate although visually striking form of Martial Arts to prevail. You can practically watch the last half hour on autopilot. It`s kung fu movies by the numbers.

Still, Fearless Hyena is enjoyable and entertaining, and this disc`s image quality is peerless. It`s just too bad about the Surround remix. Fortunately the original mono track is there.