Article
Halo 4: Forward Unto Dawn is out to buy now on DVD and Blu-ray
Recently Added Items 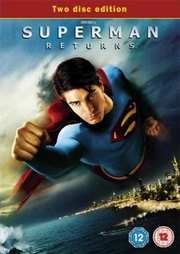 Synopsis:
After the battle with General Zod and his gang of Kryptonian super-villains, Superman (Brandon Routh) mysteriously disappears for six years. After searching for more possible survivors from Krypton and finding none, Superman returns to Metropolis to re-assume the identity of Clark Kent. Once he returns, he discovers that Lois Lane (Kate Bosworth) is in a relationship and also has a son. Superman also discovers that Metropolis has learned to live without him, causing him to lose his motivation to fight and protect. To make matters worse, Superman`s old nemesis Lex Luthor (Kevin Spacey) has devised a plan to defeat the Man of Steel, for good. Superman must put his troubles behind him in order to protect his lost love, and the city who lost faith in him.