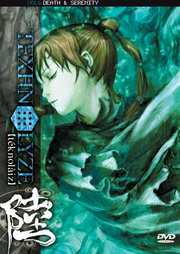 If there is one thing that is vexing about anime on DVD, it`s the staggered release schedules. It especially bites with an anime of the calibre of Texhnolyze. This is an intricate narrative, a compelling story set in a fascinating world. Yet we get intense bursts of 4 episodes at a time, and then have to wait a couple of months for the next hit. This 22 episode series made its UK debut 12 months ago, and it`s only now that the final volume is released. I`m just thankful that I can now watch it in one sitting, letting it unfold naturally.

If you want something provocative from your anime, something that challenges your perceptions and will have the wheels of your mind spinning long after the end credits have rolled, then you need look no further than the work of Yoshitoshi ABe. He came to attention in the West with the phenomenal Serial Experiments Lain, a story that twisted reality with its intricate plot and was astounding in its visual inventiveness. ABe then changed tack with the more magical Haibane Renmei, but retained that flair for storytelling. Now with Texhnolyze, he goes back to the darker side of the genre, indeed far darker than Lain and tells a bleak and raw story set in a grimy, run down underworld. Prepare to be challenged once more.

Lukuss is the city at heart of that dark dystopian world mentioned above. Located beneath the Earth`s surface, it is a place where people live harsh lives, gangs battle for dominance, and the ultimate in technology is expressed in the form of Texhnolyzed limbs, artificial replacements for limbs lost in the constant fights for supremacy, though only affordable by the rich. In this world Ichise is a prizefighter, providing entertainment for this world`s powerful. This is an unhealthy profession though, especially when he has an affair with the fight promoter`s woman that ends badly. He`s given a brutal message that ends with him losing his arm and leg. His shattered body is found by a surgeon, who for reasons of her own gives him Texhnolyzed limb replacements.

This final volume concludes the series, tying up the loose ends, and revealing the secrets yet to be unveiled about the underworld of Lukuss, and the upper world. Following Ichise`s journey to the surface with the Doctor, which proved to be somewhat fruitless, he returns to the city. However, events have taken an ominous turn in his absence, and there may be little he can do to salvage matters. 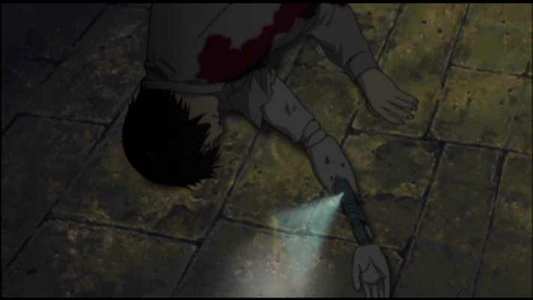 Texhnolyze gets an absolutely gorgeous 1.78:1 transfer. The image is sharp and clear throughout, and while there is the inevitable digital banding associated with anime on DVD, there is no other problem with the transfer. Any grain is solely a creative decision, and adds to the atmosphere of the animation. I think the word dark has been used already in regards to this story, and no doubt will be again, but visually the grimy underworld is brought across excellently, with dark detail and shadows all well defined and superbly reproduced. The irony is that the grime and underworld status of Lukuss, as well as the darkness of the story is accomplished through brightness and through light, with many scenes having an overexposed feel to them. It gives an oppressive atmosphere to the anime that is startlingly effective.

The detailed world design is astounding; Lukuss is truly an imaginative creation that serves the bleakness of the story well. This is a run down city, aged and decrepit, reflecting the stained people that live in it. The character design is equally stunning, as far removed as possible from the anime stereotypes of large eyes and vibrant colours. There is a realism to them and the way they are animated that adds to the story. The stylistic choices to tell the story also make use of static filled flashbacks, POV imagery and light and shadow to maintain and enhance the atmosphere. 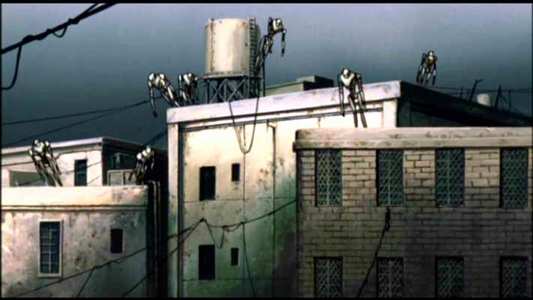 You get a choice of DD 2.0 English and Japanese, with English subtitles. This is a show that is dialogue light to say the least, so it matters less than with other anime which soundtrack you listen to. While surround tracks would have been preferable, the stereo tracks are effective in terms of effects placement, and when pro-logicked up you can take advantage of some really nice sound design. The stunning imagery wouldn`t be atmospheric at all were it not for the sound, and Texhnolyze has an understated soundtrack that echoes the bleakness of the city well. It is also complemented by some equally subtle music. 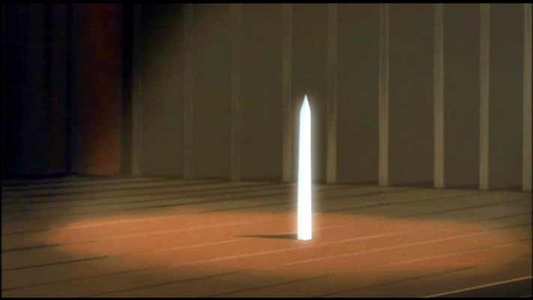 As always MVM do a smart job authoring their discs, providing a menu in keeping with the tone of the show, as well as a jacket picture to look at when the disc isn`t spinning.

This final volume disc concludes with fifteen minutes of Alternative Dialogue Outtakes, in which the voice artists let their hair down with some goofing around. By now, this has lost any humour value that it had in the previous discs, and is even a little out of touch given the conclusion of the story. You can see the original Japanese conclusion to the series, as well as a textless version. The disc rounds off with trailers for Ikki Tousen and Full Metal Alchemist. 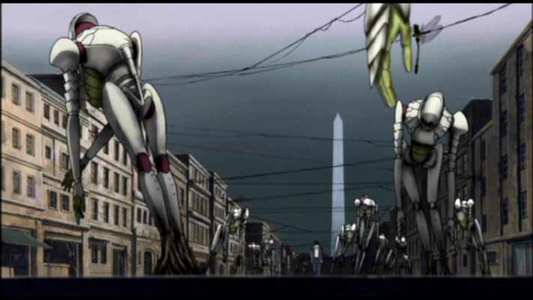 Spoilers… The last thing that you would expect in a review for the final volume of a series would be spoilers. So much as I would love to go into detail about these three final episodes of Texhnolyze, I`ll try and keep things general. The most important thing is that this disc offers a worthy conclusion to the story, and if you have been following this series as religiously as I have, then you won`t be disappointed. I certainly wasn`t. The story description above doesn`t do Texhnolyze justice by the way, as it is a richly layered complex tale, told languorously with emphasis on character. It`s also told in a disjointed, confusing style that hints and alludes, rather than resorting to something so crude as exposition.

However, with this final volume, the most important questions that were still hanging are firmly answered. The jigsaw is almost complete regarding the characters and their motivations, as well as the world and its origins. If there are still questions left as the end credits roll, they aren`t the sort of questions that leave you feeling short-changed, but merely serve as inspiration for more thought about what has just transpired.

Over its six volumes and 22 episodes, Texhnolyze has served as an apocalyptic vision of the future. This isn`t one of those futures punctuated by mushroom clouds and giant meteors, or rising oceans and melting ice caps. This is a look at what may come to pass, given the slight exaggeration of one or two traits of human nature. It`s the sort of bleak dystopian vision that comes from the masters of sci-fi, and Texhnolyze ranks up there with the speculative fiction of Philip K. Dick. It`s astounding, thought-provoking stuff. Texhnolyze presents the stratification of society that occurs when humanity`s basic drives are distilled. The upper world consists of those people who divorce themselves from the baser nature of humanity, who retreat and choose the stagnation that comes with a `higher` existence. The inhabitants of Lukuss on the other hand represent the more barbaric side, struggling against each other for supremacy in the city. The Racan are the anarchists, the people of Gabe the old guard, the Salavation Union the New Order, and The Organo are the in-betweeners, the compromisers. In limbo between Lukuss and the upper world are The Class, aspiring to greatness, yet still possessing their base desire for power. These groups exist in precarious equilibrium, but all it takes is an exceptional man to tip the balance. There are several exceptional individuals in Texhnolyze, all pursuing their own agendas, and through Ichise`s eyes, we see this society dissolve into a destructive orgy of mutual annihilation. Incidentally, if you were expecting a light and fluffy upbeat ending to the series, you`ll be disappointed.

Texhnolyze is bleak and gritty stuff. It`s also utterly compelling and visually atmospheric. If you have any preconceived notions about anime, put them to one side, as this series is unlike anything else. Texhnolyze possesses a complex adult story, intelligent ideas, and multi-faceted characters. True, it won`t be to all tastes. If you are looking for optimism and hope in a story, then look elsewhere, and nothing is laid out on a platter for the audience here. This is truly one of those instances where the more you put in, the more you get out. But if you are willing to put in the effort, then I have no hesitation in recommending Texhnolyze, one of the more atypical animes of the year, and also one of the most impressive. This final volume is just the cherry on the nihilistic cake.