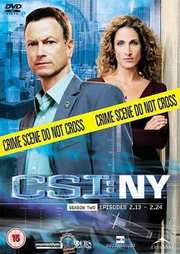 Synopsis:
The final twelve episodes from the second season of the popular spin-off series starring Gary Sinise. These episodes introduce a raft of new characters and hard-hitting cases, from the expert skyscraper climber who plunged to his death while scaling the Empire State Building, to the murder of a fashion designer, killed while wearing an eight million dollar diamond bra from his own collection. Episodes comprise: `Risk`, `Stuck On You`, `Fare Game`, `Cool Hunter`, `Necrophilia Americana`, `Live Or Let Die`, `Super Men`, `Run Silent, Run Deep`, `All Access`, `Stealing Home`, `Heroes` and `Charge of This Post`.

Special Features:
Other documentaries (`Top of the Heap`, `A New Look From the 35th Floor`, `Kid Rock` featurette, `Heroes` featurette, `Following the finale`)