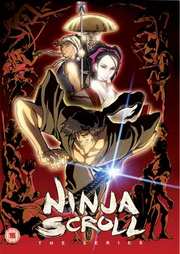 Synopsis:
Volume 1 - Dragon Stone: In feudal Japan, the Edo period brought a time of delicate peace bought with blood. Ninja Scroll: The Series chronicles the life of Jubei Kibagami as he wanders the countryside as a ninja for hire. At this time, ninja clans are everywhere. One clan, known as the Hiruko Clan, doomed to live and die in darkness, protects a sacred treasure called the Dragon Stone. The Kimon Clan, however, bent on reviving the power of the Toyotomi, wants the Dragon Stone and the treasure it hides. Jubei is the best man for the job of protecting both the Dragon Stone and the only one who can use it-The Light Maiden.

Volume 2 - Dangerous Path: Jubei, Shigure, Dakuan and Tsubute set out to find answers. The battles heat up as the Kimon become more desperate to obtain the Dragon Stone and the Light Maiden, while the Hiruko are just as desperate to keep the Kimon from their goal. Everyone is out for blood, with Jubei stuck right in the middle!

Volume 3 - Deliverance: The war between the clans reaches its climax as Shigure is kidnapped by the Kimon clan, leaving both the Hiruko and Jubei desperately chasing after them. As the powers of the Light Maiden grow stronger, friends and enemies become harder to tell apart and Shigure, pursued by legions of creatures, finds she can no longer deny her responsibilities as the Light Maiden. She alone is the key to finishing the war, and the drifter ninja Jubei has committed himself to seeing her to the end!