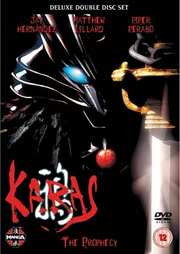 Front Cover of Karas: The Prophecy

Review of Karas: The Prophecy

Karas: The Prophecy is the latest anime release from Manga Entertainment, but it`s not just your typical anime. Instead, it`s very much a meeting of East and West. While the animation style is obviously Japanese, the story has more in common with the graphic novels that come out of the US and UK, with its depiction of superheroes and supervillains given a startlingly familiar twist. It`s no surprise that comparisons have been made to Batman and The Crow. Originally released last year in Japan as six OVA episodes, the show has been re-edited into two movies, the first of which is reviewed here. Manga Entertainment have also produced an English dub, with the vocal talents of Matthew Lillard and Piper Perabo among others.

The demon world and the human world coexist uneasily in Tokyo, but there has always been a champion to uphold the balance. The Karas is a mythological being clad in raven black armour, wielding a sword against his enemies, anyone who would threaten either world. That was until three years ago, when a former Karas named Lord Eko slew the champion, and moved into the human realm. Since then, other demons have become Mikuras, corporeal in the human realm and requiring human blood to survive. For three years, the city has been plagued by serial murders that no one can solve. Invariably one survivor is left to tell an impossible tale, while the victims lie drained of blood. The police are baffled, but they have set up a unit to investigate these apparently supernatural crimes. Their best lead comes when Inspector Kure is on location when an attack occurs, leaving only a young television presenter named Hinaru alive. What is more provocative is that just prior to the attack, an enigmatic new arrival was caught on camera, predicting the slaughter. But Nue isn`t a mere clairvoyant. He has his own business with the demons of Shinjuku. At the same time, a new Karas is called to restore the balance, and aided by Yurine he sets about the Mikura who have been preying on the innocents of Tokyo. But Lord Eko has been anticipating all this… 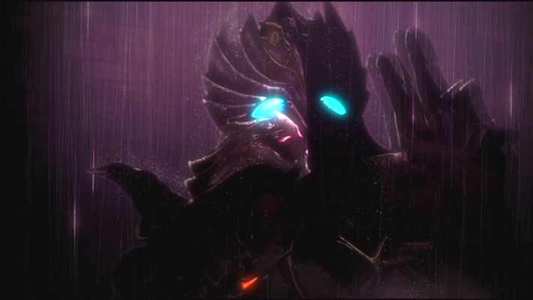 Presented in 1.85:1 anamorphic, the image quality of Karas is almost perfect. The image is prone to the colour banding that is present to some degree with most animation on DVD, and there are a couple of trivial instances of compression artefacts. But the positives far outweigh the negatives. Karas hits like the proverbial brick. Its visual flair and dynamism is like nothing I have ever seen before, combining 2D and 3D effortlessly to create an experience that is literally jaw dropping.

This really is a comic book brought to life; the city and environments boast a dark gritty feel that hints of the gothic, but contrasts with a neon futuristic style that gives the story a technological slant. The character designs are excellent, and the idea of the demon world co-existing with the human world is inventively realised. There is a time shift between the two that allows for plenty of Matrix like applications of bullet time, as the invisible demons pass through a static human world. There is a colourful misty feel to the anime and effective use of light and shade give it a tangible reality that brings it out of the screen. The action sequences are something special too, absolutely breathtaking when at their best, as the animators use CG effects to stunning vibrant effect. If you think of Japanese anime to be more static than its Hollywood competition, then think again. This animation is truly astounding. 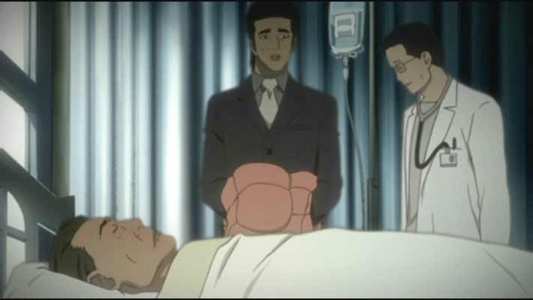 Manga Entertainment once again do their `everything but the kitchen sink` approach when it comes to soundtracks, here necessitating two discs. Disc one has the DD 2.0 and DD 5.1 Japanese and English soundtracks, while Disc 2 has DD 2.0 English as well as DTS English and Japanese. I listened to the Japanese DD 5.1 and found it to be an excellent track. Karas is an action filled show, and the soundstage was fully used in relaying the effects. With the visual dynamism you would expect the sound to be equally as energetic and Karas in no way disappoints. The music is orchestral and powerful. It isn`t immediately memorable, but it suits the genre down to a T. It did vaguely remind me of Dark City and that is no bad thing. I sampled the English dub and found it to be excellent, very natural and well performed. Translated English subtitles are provided of course. The only downside was a badly placed layer change, in the middle of a music cue. There were more appropriate places to have it. 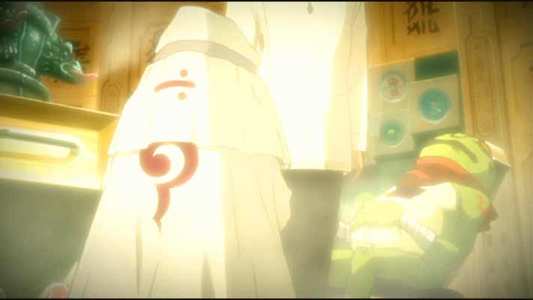 We don`t do too badly for extras either, here split across the two discs, complete with animated menus.

Disc 1 gets the bulk of the material, with a 4-minute Behind the Scenes montage, 3 minutes of Concept Animation Comparisons, 2 minutes of soundbites in the Japanese Voice Actor Interviews and 7 minutes of the original Japanese trailers and TV spots. The most substantial offering is the Sound Effects featurette, which lasts 20 minutes and has interviews with the sound effects crew. We also get to see the magic makers at work, with their collection of sonic paraphernalia, samplers and computers.

Disc 2 has the usual collection of Manga Entertainment Trailers. It`s an ever-growing collection of adverts, with the usual Art Of Anime, Ghost In The Shell, Millennium Actress and so on. Here we get new trailers for Tokyo Underground, Tetsujin 28, Heat Guy J and a live action movie called Survive Style 5+ (Vinnie Jones in Japanese cinema shocker!) 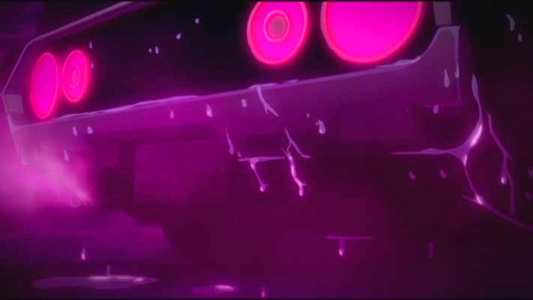 Wow! Absolutely stupendous! For eighty minutes last night, I was watching this with a grin on my face, just wallowing in a veritable feast for the eyes and ears. Karas is a visually inventive experience that burns its way onto the back of the retinas. It`s only afterwards, when the afterimage had faded that I began to worry away at some of the flaws. Karas is very much a superhero tale, a graphic novel in the Western tradition, despite the Japanese setting, mythology and idiosyncrasies. In emulating the dark and moody style of properties like Batman and The Crow, Karas creates worlds and archetypes that are instantly recognisable to Western audiences, but in doing so also emulates one of the flaws of the graphic novel, the lack of character development.

In the first half of Karas, the characters barely register, hidden behind all the glorious eye candy. All the main players are introduced, the unfortunately named Yurine, the new Karas, the man with a mission Nue, the cops Sajisaka and Kure, the survivor Hinaru and the villain of the piece Eko. But none of these really grow beyond their mission statement. It`s something I expect from Graphic novels, after all Batman is always dark and brooding, Superman is always American apple pie, Lois Lane is always Lois Lane, but to see the same approach in anime is a little disconcerting. Of course, this only the halfway point, and it is yet to be seen how the tale will develop.

As for the story itself, convoluted would be an understatement. What the film lacks in character growth, it more than makes up for in exposition. The duality of worlds is hardly a new idea, but the idea of a Champion maintaining the balance between the two is stylishly realised here. Karas is a supernatural figure himself, clad in mechanical body armour that can alter form with the use of a golden amulet. The clashing of the two realms is an interesting idea, and the mythology that develops in this first half is more than enough to hold the interest where the characters cannot. It isn`t all laid out either, but makes you work for the information, letting a snippet out here or there, and ensuring that you pay attention as it builds up to the excellent cliff-hanger.

The episodic nature of the story is also very much apparent, despite being re-edited into an 80-minute movie. The joins that link the three episodes together are obvious (Indeed one of them should have been used for a layer change), and converting it into two movies hasn`t really done it any favours. Still, Karas grabs you from the very first frame and just doesn`t let go. Its world and characters follow universal archetypes, and given Hollywood`s current penchant for comic-book movies, I wouldn`t be surprised if Karas catches the eye of a studio. Karas is dark, moody and action packed, and this first volume sets up a humdinger of a story. I can`t wait to see it resolved. I can`t deny that like many graphic novels, it`s a case of style over substance. But what style!