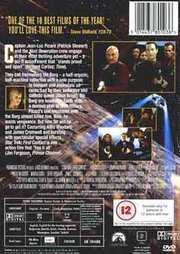 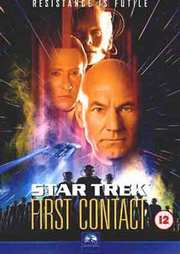 Synopsis:
Captain Jean-Luc Picard and the Next Generation crew engage in their most thrilling adventure yet - a sci-fi action event that "stands proud and apart" (Richard Corliss, Time).

They call themselves the Borg - a half-organic, half machine collective with a sole purpose; to conquer and assimilate all races. Led by their seductive and sadistic queen, the Borg are headed to Earth with a devious plan to alter history.

Picard`s later encounter with the Borg almost killed him. Now, he wants vengeance. But how far will he go to get it?

Ah, a classic of the genre. I`ve never been much of a fan over Star Trek, the episodes can get a little tedious and the acting at some times is a little over-zealous to say the least.

Putting aside my qualms though I must say that this film is superb, the action sequences are stunning, the picture quality is smooth and unfaltering and the storyline itself is perfection. If you like the Borg you will LOVE this film :-)

this is a great movie.scary funny its classic trek.however although the picture and sound quality are excellent.the dvd itself is pathetic.no real extras mean paramount do as little as possible.its not good enough.the film is first rate
posted by flair on 15/11/2000 22:37
9 / 10

The Picture is absolutly amazing and clear, it looks even better than it did at the Cinema.

The sound, well... if you like to recreate Earthquakes then this is for you.

The Features... hmm.. what features, two trailers and Subtitles. Shame really, this DVD should be bursting with Features... but hey the film makes up for this loss I guess.

Without a doubt, this is my favourite of the nine (soon to be ten) Star Trek films. First Contact sees the return of the Federation`s mortal enemy, the Borg, as they once again attempt to assimilate humanity. On this occasion the seductively evil Borg Queen is in attendance as they head for the heart of the Federation, the planet Earth. Contravening a direct order from Starfleet, Captain Picard, aboard the newly constructed Sovereign Class Enterprise-E, joins the battle against a massive Borg cubeship.

Using his first hand knowledge of the Borg he is able to find a weak spot that leads to the destruction of the cube. Before it is destroyed, the cube launches a smaller spherical ship that continues on its way to Earth, hotly pursued by the Enterprise. The Borg sphere creates and enters a temporal vortex, instantly changing the timeline to one where the Borg had assimilated the human race. Conveniently protected from the changes in the timeline by the vortex, the Enterprise follows the Borg ship back into the past to repair the damage they have caused.

The stunning opening sequence, which shows Picard held captive aboard a cubeship, really conveys the massive scale of the Borg vessel - it`s immense! The first thing that you notice about this film is how the look of the Borg has changed. No longer do we have the pasty looking drones from the series; they have been replaced with new look drones, complete with clammy skin and biomechanical exoskeletons. As well as humans, we get to see assimilated Cardassians, Klingons and Bolians, and we actually get to witness assimilation first hand, (via nanoprobe injection tubules). In fact we get a lot of hints about the Borg in this film, but no real answers. We do however get great make-up and special effects (including a really cool Borg personal shield effect).

Most of the film concerns the crew trying to fight the rapidly advancing Hive, with Picard`s revenge fuelled vendetta as an interesting sub-plot. Just how much will he sacrifice in order to defeat the Borg? Another sub-plot concentrates on the maiden voyage of the Phoenix, Zefram Cochrane`s prototype warp ship, (it is this voyage that the Borg have travelled through time to prevent and therefore put a stop to the Federation before it can even begin).

Performances are great all round, especially from Patrick Stuart and Brent Spiner (who plays Data). Stewart could make the telephone directory sound interesting, although thankfully he has more than that to work with here. The rest of the cast are true to the characters they portrayed on television for so many years; Worf (Michael Dorn) spends most of the film dispensing extreme violence when necessary, Commander Riker (director Jonathan Frakes) is at his smooth talking best, and so on and so on. Special mention should go to Alice Krige who portrays the Borg queen, a difficult role to tackle.

On the whole the video is generally fine. It's anamorphic for a start, presented in its original 2.35:1 aspect ratio, which is always a good start. It can appear a little soft in places, which leaves you straining to pick out some of the finer detail, and there is also the odd scratch and the odd bit of aliasing. On the plus side the colours are strong, shadow detail is good and the visual style of the film is outstanding, particularly the Borg themselves. Overall, it's a pretty decent effort.

The sound mix is very pleasing, especially to a Trek fan like myself. The Dolby 5.1 mix sounds great throughout, with some excellent use of the surround channels in places. The first, and best example of this comes during Starfleet's battle with the Borg. As the crew of the Enterprise listen to radio chatter the Borg cut into the frequencies and deliver their ultimatum. The Borg voices seem to come from all around you, really giving you the sense of being surrounded by the Collective.

Dialogue remains clear throughout, and the various Trek sound effects are all spot on. The score is also excellent, as is the case with all modern Trek series.

As with most Paramount releases, the extras are the most disappointing aspect of the disc. Here we get only teaser and theatrical trailers. I don't know exactly why studios believe these to be interesting beyond the first viewing. You've got the sodding film on DVD, so why would you want to watch the trailer! Another poor showing Paramount, and if you expect us to pay the price demanded you should do better in future!

This is a good film, arguably the best in the series, marred by one or two minor video problems and a complete lack of any bonus material. The sound is great however, so that's a big plus. Obviously if you're not a Trek fan this probably isn't going to be of much interest to you, but it is more likely to convert you than any of the other films. Overall I'd say this is a good purchase for fans, everyone else should try before they buy. If you do decide to buy I would shop around, as there is no way that this extra-less disc is worth the full RRP.
posted by Chris Gould on 21/12/2002 00:04
9 / 10

Absolutely superb! One of the best films ever made. Easily the best Star Trek film and a pity that more people outside the genre have not seen it.
The plot is brilliant, the character development exceptional as the viewer will understand Picard and the Borg Queen. The Borg are a terrifying enemy and much more difficult to dispose of than your average Sci Fi enemies. The directing is assured and the editing ensures it is a fast paced action / sci fi / horror movie. Memorable scenes include the entrance of the Borg Queen, the Zero G sequence and Picard`s defiant last stand. There is even time for one liners from Worf and Data.
The DVD comes with an excellent transfer and sound. Unfortunately, there are no real extras. A commentary, featurette or cut scenes would have been much appreciated. Let`s hope Paramount release a Special Edition soon. Nonetheless, an essential buy for all film fans. What more can I say? See it NOW!
posted by morpheus177 on 21/12/2002 13:46