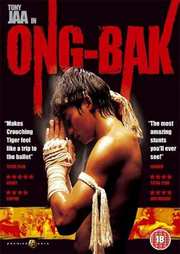 Synopsis:
Rural Thailand, the present day. When the head of the "Ong-Bak" Buddha statue is stolen from a temple in the village of Nong Pra-du, the locals, believing the statue to possess magical powers that protect the village from harm, view the theft as a catastrophe. Seeking a hero to retrieve their lost treasure, the villagers find their man in Ting (Tony Jaa), an orphaned youth raised by a kindly monk in the local temple and schooled in an ancient system of Muay Thai: "Nine Body Weapons". Ting`s quest leads him to the sex- and drug-riddled mean streets of the Bangkok underworld, where the only way this reluctant small-town hero can succeed in his task is by summoning every ounce of his awesome skill, courage and stamina to become a human lethal weapon.

Movie- It makes me wander: why on earth does it take 2 years just to release a dvd on the otherside of the earth? It kinda annoys me when one country has the dvd and on another, it`s just or is about to be released. Moving on, Ong Bak is something of a modern day martial arts classic as describe by motormouth Asia film expert Bey Logan and it is. The film practically does what it says on the tin, there are no double stunts, CGI or wire works (actually one exception to this is the tuk tuk chase sequence where a crane was used apparently). The proof for this is found in the 2nd dvd which I`ll explain later.

The plot is simple, Ting, a young Thai villager who is skilled in Muay Thai, is soon to be an ordained monk. The following day, the powerful Buddha head Ong Bak is stolen by ruthless Bangkok gangsters, Ting volunteers to get the head back from them. He goes to Bangkok to find an old friend and try to persuade him to find the ones responsible. However there are a lot of suprises in the city as he eventually finds himself involved in the underworld of illegal fighting.

This movie beats any conventional Hollywood movie anyday. The opening scene involving 20-30 odd Thai villager competing to get a single cloth is such an example of what Hollywood would not dare do but use CGI. Every participant in the scene are real (thank god for that ;)).

Although the movie`s plot is rather paper thin (and a little clichéd in some cases) particulary the stolen buddha head and Ting fighting in the illegal underground tournaments (Fight Club is the one that started it all). The pure martial arts action will make up for the entertainment. The fight scenes are mind blowing, choreography is very well done. Kill Bill had CGI-free fights but this takes things one step further as no wires were used at all (giving the Bride a run for her money).

To summarise this, if this is a new wave of Thai cinema, then bring it on! Lets hope Hollywood doesn`t remake this with Jackie Chan on the helm.


Video- Ong Bak is present in a fairly decent 1.85:1 anamorphic widescreen ratio transfer. Although Premier Asia claims the movie has been digitally remastered and restored, it`s not as clean as it should be. The pros: the video is fairly detailed with little softness and edge enhancement. Now for the cons: Although some scenes are free of grain, there are many others that exhibit a lot of grain which can be distracting especially those with sensitive eyes. I`m not too suprised about that since many far eastern movies are not handled with extreme care, the film reel is simply taken out and cut as quickly as possible. Hollywood films are mostly shot mostly in digital nowadays and this is irrelevent. Another problem I particular is the colour palette. It relies too heavily on browns in many scenes especially when Ting is in the underground fighting tournaments.

Video- You`ve got 3 choices, Thai 5.1, Thai DTS and English 5.1. Unsprisingly, I watched the film with the original language with English subtitles. The original Thai music has been replaced by a more lively ochestral score in all soundtracks which I find rather disappointing. If Premier Asia decided to change the music, then they`re better off giving the rights to their rivals, Tartan Video (which I prefer). At least Tartan never tamper the film in any way. Despite having 5.1, it`s not very mind blowing in any way. I briefly listened to the English dub and it`s terrible. Everyone sounds like a cockney, particulary the male characters who almost all sound like Bey Logan!


Extras- For those who haven`t watched the film, stop reading the review at this point as I`m about to give some spoilers. The dvd is packaged on an amaray case without any booklets except a questionaire postcard. Throw it away. The 1st disc has an audio commentary with Asia film expert Bey "I wrote The Medallion" Logan. He is very ethusiatic (as always) man and here with no exception, talks non-stop about the movie in particular. He points out there were 2 cuts of Ong Bak, an original Thai version and a Luc Besson international cut. We have the Thai version but the score has been changed for UK theatrical and subsequently dvd release. The Luc Besson version has a few scenes cut, some violence toned down and different music mostly dominated by French rap music. Bey points out it fits well with French audiences but it`s just plain disrepectful. Other highlights of the commentary include Bey mentioning about the movie being cut in Hong Kong to get a IIB rating because of "George" getting his arm broken by a gangster and Ting getting revenge by doing the same thing. Fans of audio commentaries should listen to this after watching it.

Moving on to disc 2 are some unique features not found in any versions. There are 3 sections: The Cutting Room Floor, The Promotional Archive and Fight Club.

The Cutting Room Floor contains 7 deleted scenes and an alternate ending. The seven deleted scenes are basically the ones from the final cut but are extended but had to be removed for pacing reasons. The alternate ending shows George still alive at the end compared to the final cut which he dies and Muay crying. Technically speaking, both are happy endings (since the Buddha head is returned anyway) but one ending is just one more body count.

In the Promotional Archives section, there are 4 featurettes, Ong Bak on tour, The Art of Muay Thai, The Road to Glory and From Dust to Glory.

Ong Bak on tour is a very short 3 minute piece with Tony Jaa, the man who played Ting going to different countries and demonstrating his amazing abilities. The moves he make are exactly like those in the movie, so there! no CGI or stunt doubles are used. This is basically a montage of him doing the stunts intercut with footage from the film accompanied with the film`s new score. It`s somewhat a pointless featurette and is a watch once.

The Art of Muay Thai is a 24 minute featurette which explains about the philiosophy and techniques of Muay Thai boxing (or just Thai Boxing). This is self explanatory. Next is The Road to Glory, a lengthy behind the scene or specifically a compilation of on screen footage with commentary with one of the writers Panna Rittikrai and Tony Jaa. Despite clocking in at an impressive 86 minutes, I find a proper documentary with interviews with cast and crew to be more appropriate (the commentary does have its moments). It comes in 8 parts or can be viewed in one go.

Next is From Dust to Glory, another pointless featurette which intercuts interviews (which accounts 25% of featurette) with footage from the film (75%!!!). Despite the name of the featurette, the director is also there. The interview is obviously staged...what the heck? It seems odd that she give a question to the interviewee in English and the director replying back in Thai. It lasts just under 4 mins. In short, much of the featurette is interviewer and movie fluff. The UK promotional trailer...get rid of it please!

Next section is Fight Club, nothing to do with promoting the excellent David Fincher movie but with more talking head featurettes and a behind the scenes footage.

Visble Secret is a behind the scenes footage lasting only 4 minutes. It features rare footage of Jaa and Don Ferguson blocking out potential ideas for the fight sequences. The footage is accompanied by the same ochestral music heard in the menus. Serves no purpose other than to boggle the viewer.

The Bodyguard is an interview featurette with Don Ferguson. It lasts 10 minutes. Again, Premier Asia thought it is a brilliant idea to intercut footage from the film again to make the featurette look longer than it really this. That is the secret to make a long featurette, adding lots of movie footage. Around 20-25% of the footage is from the film followed by the typical "what is it like to work with Tony Jaa" answer.

Mad Dog is another interview featurette with David Ismalone, who plays the last opponent who fights Jaa in the bar and cheats the game by using every object as an improvised weapon. It lasts 11 minutes and like the previous featurette, the first 30 seconds is filled with movie footage. Tartan Video should`ve taken the rights to this film as they don`t make newly commissioned featurettes and they don`t tamper with the feature films so much.

Pearl Habour is yet another interview featurette with Erik Markus Sheutz. He is Jaa`s very first opponent who is instantly knocked out with one kick. It is the least interesting as the interviewee answers in the style of a Politician. At 14 minutes, this sounds like good news, but this featurette has the most movie footage of the 3 talking head featurettes to compensate for the fact that the guy is not a particulary a good interviewee. Roughly 20% is movie footage. When will Medusa Comms/Premier Asia learn?!?!?!

The features get 7/10 mostly down to the featurettes which I find not having any great insight to the film. It`s mostly "What is it like to work with person X" type featurettes hence it gets repetitive and extremely tedious. The highlight of the extras is Bey Logan`s commentary.

Overall- A fan of action movies must get this! This new wave of martial art cinemas will definately pummel a lot of other martial arts movie including Kung Fu Hustle (good but uses too much CGI). Everything in this movie is manual labour nothing else! Buy it for the movie. Don`t say I warned you about the featurettes! Two thumbs for Ong Bak, two thumbs two for the extras (except the commentary).
posted by alias-rf2 on 17/11/2005 02:07