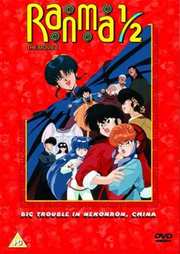 If you have been watching as much anime as I have, you probably are used to the harem genre by now, where a teenage boy finds himself pursued by no end of beautiful women. Ranma is another such teen that winds up in similar straits. He is a martial artist who is engaged to Akane by mutual agreement of their fathers. There are a whole host of other women who become attracted to Ranma, including Amazon warrior Shampoo, and Pizza chef Ukyo. Ranma has his rivals for their affections as well, fellow martial artist Ryoga, playboy Kuno and bookish Mousse. Which would all be recipe for a lot of straightforward relationship mayhem, were it not for the curse. The springs of Jusenkyo have resulted in Ranma turning into a busty redheaded girl when splashed with cold water (hot water reverses the effect), which causes more than a few problems. Similarly, Ranma`s father Genma turns into a Panda, Ryoga into a pig, Shampoo into a cat, and Mousse into a duck. For our transsexual hero, you`d think his relationship with Akane would be the least of his problems. The Ranma½ series originates from the late eighties/early nineties, and MVM have released two of the movies that spun off from the show.

The first film, Big Trouble In Nekonron, China begins with Ranma`s teacher Happosai on one of his customary panty raids. The diminutive elderly teacher is bounding around town, lightening washing lines of their weighty lingerie, yet all the while there is something dark shadowing him. When he gets home, he takes the chance to grab one of Akane`s unmentionables, which leads to confusion when Ranma gets blamed for it. Cue opening credits with chase scene, allowing many familiar characters to get their brief cameos in. The mayhem is brought to a halt when the ominous darkness is revealed to be an irate elephant, piloted by an even more irate girl. Lychee is here to see Happosai about a half a scroll he gave her great-grandmother, one that promised a life of happiness that has thus far failed to materialise. Which is when an airship appears over the dojo, carrying Prince Kirin who bears the other half of the scroll and is looking for his princess, only right now, Akane is holding the other half. If Ranma and his friends want to rescue Akane, they`ll have to catch a slow boat to China, with Lychee in tow. And Happosai warns that if the two halves of the scroll are ever rejoined, doom awaits the world. 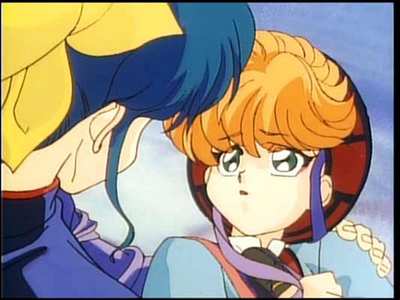 A 4:3 regular transfer on this disc, and the film looks more than acceptable. It does seem constrained by the image quality of the source material however, the animation is distinctly old style, and the resolution is a little soft. There is a hint of print damage at times and darker scenes are indistinct. You can also see that this is a Western version, with burned in captions for the credits and end song, and onscreen text. Despite the film`s age, the image is consistent in quality throughout. 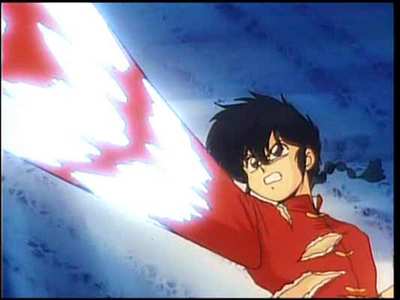 You have a choice of DD 2.0 Japanese and English, with optional translated subtitles. The dialogue is clear, but the soundtrack is nothing special, sounding very front focussed and static. It`s also a little dull sounding, but again this is more a sign of age, and never going to detract from enjoying the film. The English dub (what I sampled of it) sounded acceptable. Kenji Kawai provides the music. Yes, the same Kenji Kawai who scored the Ghost In The Shell movies. 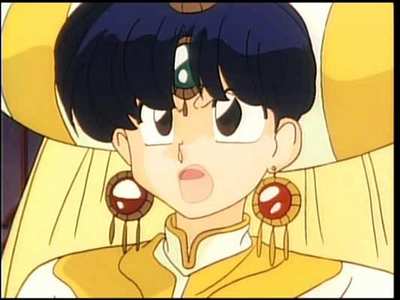 Much needed character biographies for the main cast in the film. There are 15 in total and it helps to keep everyone differentiated.

There are 4 conceptual drawings for the characters in the film. They are pencil sketches, but it would have been better if they had been displayed over plain backgrounds rather than the patterned wallpaper that is used here.

There is also the original Japanese ending, which lasts three minutes.

Finally there are trailers for Trigun, Chobits and Haibane Renmei. 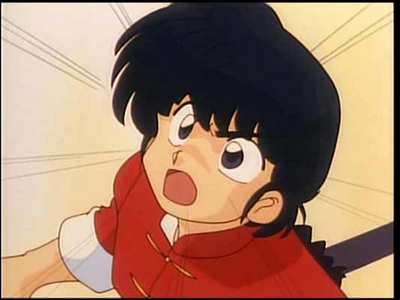 Big Trouble In Nekonron China is an entertaining little film, with the emphasis on tongue-in-cheek comedy and wanton silliness. If it does have a problem, it`s that it blows its comedic wad in the first ten minutes, with the madcap chase sequence that is better suited to a film`s climax than an opening. That isn`t to say that the rest of the film isn`t funny, but that it has a hard time matching that intensity, and the comparison can be a little disappointing.

The plot is strictly by the numbers. Girl and boy/girl have a love hate relationship, but when the girl is abducted, our hero/heroine will do whatever it takes to rescue her. The simple story is a perfect excuse for some absurd comedy that borders on the surreal at times. The humour comes out of defying expectations and left-field comments. Lychee is the woman scorned in all this, waiting for the happiness promised by Happosai to materialise, and bringing a loaded elephant when it doesn`t happen. Kirin on the other hand appears to be the sort of Prince with power over a massive dominion, but whose eating habits leave a lot to be desired.

The Ranma movie has a distinct air of silliness that pervades it throughout, and that`s no bad thing. A little daftness is good now and again, and Ranma provides a neat burst of mindless escapism. The first film has a more satisfying story than its sequel, but is tempered with a longer running time diluting the mayhem to a small degree. Either way, it`s a decent piece of transgender anime fun. (Someone call the Daily Mail!)