DVD
Object of Beauty, The (UK) 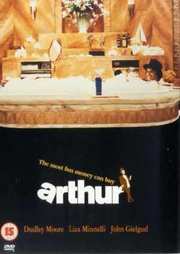 Synopsis:
Arthur Bach is a very rich man - and a very drunk one most of the time, with a bar bill that reads like the National Debt. He also stands to lose his $750 billion inheritance if he doesn`t marry the most boring blonde on Long Beach within a month. But it is an actress/waitress who catches our hero`s eye and heart...

Introduction
When it came out, this was one of the most amusing films I`d seen in a long time. I believe my sides ached when I left the screening. I recall exchanging quotes from the film with my friends for weeks after.
Well, the DVD is around and relatively cheap, but very low on features - so how will it stack up?

The Plot
The plot is the old boy meets girl, but is engaged to another girl.
Arthur (Dudley Moore) stands to inherit $750,000,000 - but his family want to see him married to a pleasant enough girl - Susan , but one he doesn`t love.
Then he meets a waitress (Liza Minelli) who is in the process of stealing a tie for her fathers birthday.
Oh dear, she`s funny and someone he could care for, but the family will cut him off without a penny if he doesn`t marry Susan.

What you don`t get from all this is Arthur`s lifestyle. He is incredibly rich, and loves it.
He spends well over 3/4 of the film as a happy drunk. Its enough to give drunkeness a good name.
He has help from his valet Hobson (John Gieldgud) and his chauffeur Bitterman.
However life has a way of throwing the unexpected, so as he approaches the fact he has to decide between the two ladies, Hobson starts to get very ill. Arthur has to sober up and face the future with some tough decisions and painful experiences.

The plot is nothing special really - it has parallels, at least to my eye, in The Graduate, and Four weddings and a funeral.

The one liners are superb though, and I`ve used them myself more than once over the years.
Quote:
I race cars, play tennis, and fondle women, BUT! I have weekends off, and I am my own boss.
Quote:
Susan: A real woman could stop you from drinking.
Arthur: It`d have to be a real BIG woman.
Quote:
Arthur: Do you know what I`m going to do? I`m going to take a bath.
Hobson: I`ll alert the media.
Arthur: Do you want to run my bath for me?
Hobson: It`s what I live for.
Quote:
Arthur: Hobson, do you know what the worst thing is about being me?
Hobson: I should imagine your breath.
I guess you could overanalyse the film, and come up with reasons for his drinking. His reluctance to let go of his childhood, his fear of facing the world. He touches on this at one point
Quote:
Not all of us who drink are poets. Some of us drink because we`re not poets.
But, let it rest, and enjoy the humour instead!

The Cast
Dudley Moore as Arthur - is just superb as the drunken playboy. He has some marvellous one liners and you just can`t help likeing him.
Quote:
Isn`t this fun? Isn`t fun the best thing to have? Don`t you wish you were me? I know I do.
Liza Minelli as his waitress girlfriend - a pretty good performance with the right sort of quirky.
John Gielgud as Hobson - definitely in danger of stealing the show with his performance. His very dry delivery is marvellous.
Other parts are played well too.

The Visuals/Audio
Widescreen and mono sound, but I swear some of the openings or maybe the logo bits are in 5.1 which confused me.
Anyway - I`ll stick with my usual hand-wavey "its a dialogue based film". The one liners come over clearly which is what I care about.

The Extras
None. Not even a trailer.
In fact at first glance it looks like even the scene selection is primitive with only 5 chapters to select between.
However on closer inspection there are more.

Summary
I still found myself laughing out loud, not as much as the first time all those years ago, but its a great way to spend an evening.
Worth getting - as its worth watching more than once.
posted by Julian Onions on 16/11/2004 08:56