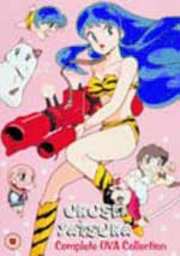 Rumiko Takahashi is one of the best-known manga artists, especially in the West. There are a host of anime series that are based on her works, and nearly all of them run into three figure episode numbers. But long running anime series rarely find an audience in the UK, and the numbers sufficient enough to justify a release schedule of up to 50 or more discs usually only apply in places like the US. In the UK, we have to make do with the spin offs and tie-ins, which can fit on fewer volumes. Having said that, Urusei Yatsura has fair exposure, with five of the six theatrical movies being released here on DVD. Also, when the series ended in Japan, fans clamoured for more, so a set of OVA episodes was created, eleven in all and running to over five hours in total. With the Complete OVA Collection released by MVM, I conclude my UK Region 2 sojourn in the world of Urusei Yatsura.

When aliens from the planet Oniboshi invaded Earth, they offered a challenge. If Earth`s champion could defeat their own, then they would leave humanity in peace. But they would get to choose the champion. They chose eternal lecher Ataru Moroboshi, a teenager with only one thing on his mind. All he had to do to win was to catch the alien princess Lum, a task made easier by her obvious attractions. The downside was that she could fly. When all seemed lost, Ataru`s girlfriend Shinobu offered to marry him, but when Ataru agreed, Lum got the wrong end of the stick, and accepted his `proposal`. Since then, Lum has become an ever-present part of Ataru`s life, making his life as a pervert extremely difficult, as her jealousy would manifest in the form of electric shocks. That was the premise of the series Urusei Yatsura, and as the show progressed a large cast of fascinating characters built up.

1. Inaba The Dreammaker (58 minutes)
It`s summer, and Shinobu is getting all melancholy over her lack of luck in love. Her temper and her fists probably have something to do with it, even when a cute rabbit suit wearing hunk named Inaba, shows up. She punches him so hard he vanishes into subspace, leaving a key behind. When Lum and Ataru help her with the key, they all get sucked into a future where they are grown up and married, only not to who they hoped they would be.

2. Raging Sherbet (27 minutes)
It`s a hot day, but Lum and her friends have gone to ice cold Neptune, where Oyuki runs a sherbet farm. Sherbets are cute little birds that dispense ice cream cones from their noses. Ran has a brainwave. She offers to see how a sherbet will adapt to Earth`s heat, but her real plan is to earn a mint with a sherbet stand. Then the sherbet escapes.

3. I Howl At The Moon (26 minutes)
The cherry trees are blossoming, and to celebrate, Lum decides to cook Ataru a special meal. Only she gets the wrong recipe. Soon, Ataru is developing some rather bizarre abilities.

4. Catch The Heart (26 minutes)
There is a type of candy that if eaten by an object of your affection, releases their heart. If you can grab that heart, he or she will be completely infatuated with you. It seems an ideal way for Lum to ensure the fidelity of Ataru, but mayhem is unleashed when the sweets get into the wrong hands, namely Ataru`s.

5. Goat and Cheese (26 minutes)
There is a statue of a goat in the grounds of Mendou`s mansion. It`s said that if a photo is taken in front of that statue, then a ghostly goat will appear. If that spirit eats the photo, then all who were in that photo will be doomed. Mendou`s dad is feeling snap happy…

6. Date With A Spirit (29 minutes)
Sakura is feeling down after being stood up by fiancé Tsubame for a date. The reason becomes clear when the gang head to his place. He woke up next to a cute girl named Maiko who has latched onto him. The thing is that Maiko is a ghost, and intends to be with Tsubame for all eternity.

7. Terror Of Girly Measles (25 minutes)
Ten has developed a case of the girly measles, and is desperately avoiding Lum and her idea of a vaccination. But when Ataru is infected, the whole town is at risk from the girly-eyed affliction.

8. Nagisa`s Fiancé (27 minutes)
Ryuunosuke`s father has purchased an island in the Pacific, where he will run a teashop. A teashop on a desert island seems like a daft idea, but the resident ghosts take the absurdity to a new level. A young girl needs a kiss from Ryuunosuke to pass over to the other side, but oddly the ghostly Nagisa isn`t playing on Ataru`s girl-hunting instincts.

9. The Electric Household Guard (26 minutes)
Mendou learns about the hereditary ninja guardians who protect his family. His personal shinobi will henceforth be Shingo, but Shingo only has eyes for Mendou`s sister Ryoko.

10. Ryoko`s September Tea Party (49 minutes)
Ryoko is bored, and to alleviate the tedium invites all her friends over for some tea and a chat, as well as an opportunity to reminisce.

11. Memorial Album (28 minutes)
An observation satellite orbits, having an existential crisis while it watches life unfold in Tomibiki town. 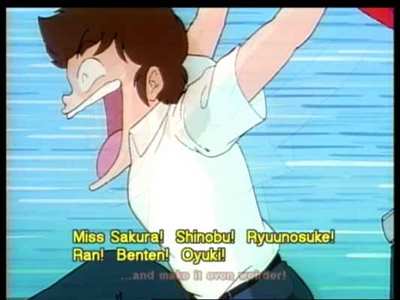 The OVAs were released in the UK in 2004, and were presented over 3 discs, two single layer and one dual. With a 4:3 transfer that looks as if it has been taken from the VHS, it`s low resolution, soft and has some colour bleed. On the other hand, it`s clear and pretty free of print damage, and the animation isn`t hampered by the soft look. I did notice some compression artefacts, especially on the single layer discs, but it didn`t detract from the overall experience, except for the worst culprit, episode 6, which even suffered from big chunky pixellation in one scene. Worse pixellation popped up again in episodes 10 and 11, but this was an error in the transfer rather than problems with compression. 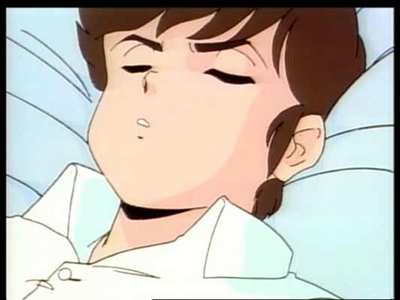 You get the sole Japanese soundtrack with burnt in English subtitles. The dialogue is clear, and the straightforward DD 2.0 track has no flaws, until you get to episodes 10 & 11. Episode 10 suffers from a brief dropout in the end credits, but there is significant distortion for about three minutes of episode 11. 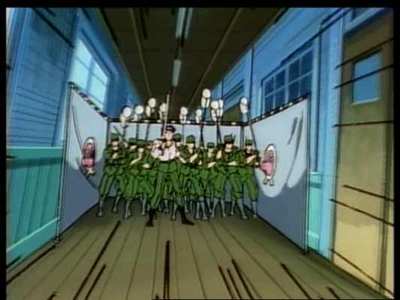 The four discs are presented in a VHS sized case, with two housed on a central swinging panel. It`s a fairly large volume, but there`s no denying that the case is sturdy.

Yes, I did say four discs, as the fourth disc is a CD-ROM which contains a set of WebPages that offer a glimpse into the world of Urusei Yatsura, with bios for five of the characters, as well as a bio of the creator Rumiko Takahashi, an essay on the assets of Lum, and some other MVM goodies. Given the size of the UY universe, and the sheer plethora of incidental characters, these pages merely scratch the surface.

The DVDs get static menus with Play All and Episode Select options. 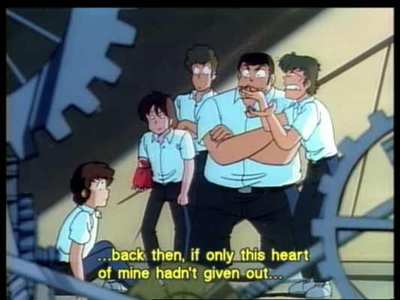 Well that was fun. Urusei Yatsura is like Benny Hill on steroids, and it`s easy to see why 200 episodes weren`t enough for some fans, and why these OVA episodes were commissioned after the series ended. The formula is pretty simple, something weird happens, Ataru`s lecherous nature is invoked, and it all ends in a chase sequence, with Lum firing electric shocks after her reluctant fiancé. It`s utter slapstick mayhem and I loved every minute of it.

Well not quite, as after 200 odd episodes and 6 movies, there is a little fatigue setting in. I don`t know how these episodes compare to the original series, but I did find them preferable to some of the films. Yet while the early episodes did have energy and verve to them, by the end of this boxset, I could sense that the well was running dry. The Electric Household Guard was the first episode that I yawned through, with Lum and Ataru taking such a back seat role in the proceedings that this episode could have been about anyone else. The final two episodes were the worst in my opinion, cheap and cheerful clip shows that harked back to a series that I haven`t seen, and I was missing the context of the flashbacks for much of the runtime. It`s easier and cheaper to animate, but it doesn`t make it any easier to watch. Fortunately the majority of the discs` technical problems crop up in these episodes.

Urusei Yatsura is great fun, and the majority of these episodes had me laughing out loud, and wishing that the series proper would one day make it to these shores. Just contemplating importing the entire series would have implications for the trade deficit. Failing that, these OVAs will certainly suffice, and if you give the final two episodes a wide berth, there is much to appreciate.