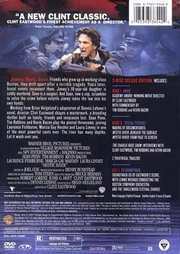 Back Cover of Mystic River

DVD
Last Samurai, The (Widescreen) (US)

DVD
Departed, The (US) 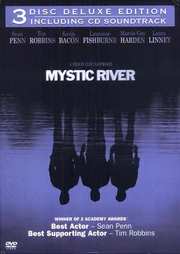 Synopsis:
When they were kids growing up together in a rough section of Boston, Jimmy Markum, Dave Boyle and Sean Devine spent their days playing stickball on the street, the way most boys did in their blue-collar neighborhood of East Buckingham. Nothing much out of the ordinary ever happened, until a moment`s decision drastically altered the course of each of their lives forever. Twenty-five years later, the three find themselves thrust back together by another tragic event--the murder of Jimmy`s 19-year-old daughter. Now a cop, Sean is assigned to the case and he and his partner are charged with unraveling the seemingly senseless crime. In the wake of the sudden and terrible loss of his child, Jimmy`s mind becomes consumed with revenge--and his own plans to find the killer. Caught up in the maelstrom is Dave, now a lost and broken man fighting to keep his demons at bay. As the investigation creeps closer to home, his wife Celeste becomes consumed by suspicion and fear, while Jimmy`s wife, Annabeth, draws her family tighter together in order to weather the storm.