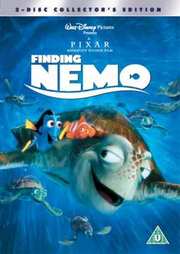 There are 3.7 trillion fish in the ocean, they`re looking for one
Certificate: U
Running Time: 96 mins
Retail Price: £21.99
Release Date:
Content Type: Movie

Synopsis:
From the Academy-Award-winning creators of Toy Story and Monsters, Inc. It`s Finding Nemo, a hilarious adventure where you`ll meet colorful characters that take you into the breathtaking underwater world of Australia`s Great Barrier Reef. Nemo, an adventurous young clownfish, is unexpectedly taken to a dentist`s office aquarium. It`s up to Marlin (Albert Brooks), his worrisome father, and Dory (Ellen DeGeneres), a friendly but forgetful regal blue tang fish, to make the epic journey to bring Nemo home. Their adventure brings them face-to-face with vegetarian sharks, surfer dude turtles, hypnotic jellyfish, hungry seagulls, and more. Marlin discovers a bravery he never knew, but will he be able to find his son? Finding Nemo`s breakthrough computer animation takes you into a whole new world with this undersea adventure about family, courage, and challenges.

It took me a couple of months since I bought the movie until I sat down and watched it (for the very first time). Well, it was sure worth the long, long wait. This turned out to be a magnificent movie in every aspect.
Disney succeeded (yet again!) to come up with a great combination of drama and humor and wrapped it all up in an almost unparalleled package.
The video transfer is superb. Perfection is the word that best describes the transfer and the CGI`s quality. The amount of detail in every scene is incredible and the animation is simply flawless. The colors are very nicely saturated, and naturally the transfer is clean of any defects.
The DTS 6.1 and DD 5.1 soundtracks are awesome. The surrounds are used throughout the movie and create an incredibly realistic atmosphere. My local (Israeli) version of the movie also includes a DD 5.1 Hebrew soundtrack, which is a great feature for the kids.
The menus are beautifully animated with sound.
The extras include a commentary by the crew, several screen savers, a very detailed behind the scenes featurette with explanations about the special effects, 6 deleted scenes, some vocal bloopers, several storyboards, a multi-lingual (and funny!) video clip, a picture gallery, a short documentary about the ocean, several interactive games, a real-along and a music video.
Bottom line - A truly good movie for both adults and kids, presented on an almost unparalleled disc. This one is a MUST in every collection.
posted by Zvi Josef on 17/11/2004 17:04