Review of Commitments, The
added by
RWB
Places to Buy 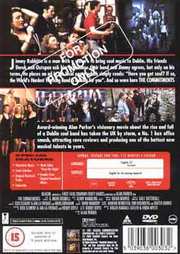 Back Cover of Commitments, The
Related Items

DVD
Enemy at the Gates (UK) 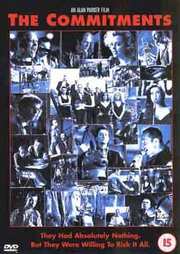 They had absolutely nothing. But they were willing to risk it all
Certificate: 15
Running Time: 113 mins
Retail Price: £19.99
Release Date:
Content Type: Movie

Synopsis:
Jimmy Rabbitte is a man with a mission to bring soul music to Dublin. His friends Derek and Outspan ask him to manage their band and jimmy agrees, but only on his terms. He places an ad in the local paper which simply reads: "Have you got Soul? If so, the world`s hardest working band is looking for you". And so were born The Commitments.

Award-winning Alan Parker`s visionary movie about the rise and fall of a Dublin soul band has taken the UK by storm; a No.1 box office smash, attracting rave reviews and producing one of the hottest new musical talents in years.

The Commitments is based on the first of the "Barrytown trilogy" by Roddy Doyle.
I`ve never read any of his work, but it seems he has a certain touch, as a number of his novels have been turned into films. The commitments amongst them.

The screenplay is by Roddy himself, together with Dick Clement and Ian La Frenais who have penned any number of successful shows for TV.

Its somewhat like the Blues Brothers - close to being a musical, and they ARE putting a band together - except there are no car chases, their mission isn`t from God, they are not 150 miles from Chicago and nobody breaks their watch - ok so I`ll grant you as comparisons go, it is a little on the thin side.

The Plot
Its set in Dublin, Ireland where Jimmy Rabbitte is asked by friends to manage a band.
He agrees but has his own vision for where the band should be headed - on a mission to bring soul music to Dublin (see - there is a mission!).
He places an advert in the local paper which attracts all manner of weird and wonderful to attend the auditions. After choosing some of the least weird of the applicants, together with a couple of the local girls to add eye-candy, they set about becoming a band.

The band beg, borrow or steal instruments and rehersal premises.
They go from bad to ok, and slowly you can see the seeds of possibility appear.
However simmering away underneath is a whole load of prejudices, bickering and intolerance, that somehow Jimmy keeps the lid on, and continues to inspire them.
As they play their first few gigs, you can see there is a change they can make it despite the odds. They clearly have something others don`t. You`ll have to see the film to see how far they make it though.

As a "feel good" film it works. Its a gritty, down to earth, raw edged,
feel good film, rather than a "nice cutesy" feel good film.
There are plenty of jokes and funny moments too, which keeps the plot moving along nicely.

Its an almost unknown cast, for the time. Andrea Corrs appears in it, (before she was famous) as a minor part, and there are cameos from some of the other band members.
The choice of Andrew Strong for the lead singer is sort of interesting, he can sing, but he`s no Robert Redford to look at - which probably fits the character perfectly. Apparently his father was the first choice, and he came along to the audition to watch, and got the part.

The Video/Audio
The video transfer is fine, and the audio is in stereo. You could have hoped for a better audio mix, but then there aren`t the great special effects that demand 5.1. The songs are great, and while I`m not a particular Soul fan, you sure get carried along by the energy and beat of the tracks. There is a CD soundtrack which did pretty well at the time I seem to remember.

The Extras
The extras are a little thin, a brief feature, a few extra musical bits and a trailer.

Summary
In summary, a good film which does inspire and make you feel good - at least some of the time. You can pick up the DVD quite cheaply too.
posted by Julian Onions on 4/2/2004 10:47