DVD
Blackadder: Back & Forth (UK) 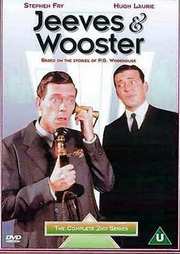 Synopsis:
Featuring the entire second series of `Jeeves And Wooster` based on the characters created by P.G. Wodehouse.

Introduction
I say old chap, what scrapes is Bertram getting into this time?

Its another collection of the excellent Jeeves and Wooster series.
Now I`ve waxed lyrical on the characters before, in the series one review, and they just get better in this edition.

The Story
Our first outing on the disk, involves the notorious cow-creamer. A jug that has a number of appearances throughout the series. Its an antique silverware jug that is both admired and desired by Sir Watkyn Basset and Berties Uncle Tom.
When Bertie is told to go and cast doubts on the article so that Uncle Tom can pick it up for a song, unsuprisingly things go wrong.

The second episode, I`ll go into more detail, so those who are unfamiliar can pick up some of the nuances of the humour.

The main characters in this episode, beside Bertie and Jeeves are:
[list] [*] The Reverend "Stinker" Pinker - a pennyless curate hoping to be engagaed to Stephanie "Stiffy" Bing. However due to his somewhat impercunious nature, the alliance will not be smiled on by her Guardian Sir Watkyn Basset.
[*] Stephanie "Stiffy" Bing - a rather feisty woman, not uncomfortable with a little emotional blackmail to get what she wants.
[*] Maddeline Basset - a rather more wet character than Stiffy, but with her own views. Daughter of Sir Watkyn. Currently engaged to Gussie Fink-Nottle. However Bertie is the emergency backup bridegroom due to past history, so if anything goes wrong with the alliance, she will march Bertie down the aisle in a momment.
[*] Gussie Fink-Nottle - a land owner hailing from somewhere in Norfolk. A bit of a wet drip most of the time with a fascination for all things associated with newts.
[*] Sir Watkyn Basset - a typical lord of the manor, with strong views about everything and a healthy dislike for Bertie. Friend of Spode.
[*] Roderick Spode - another fierce character, with a dark secret.
He is also leader of the black-shorts, a fascist group with plans to arm the populace with bicycles, umbrellas and turn over large parts of the UK to brussel sprout and turnip production.
[*] Barmy "Fungy-Phipps" Fotheringay-Phipps - one of Berties pals. Doesn`t take much part in this one.[/list]

The episode opens with Gussie seaking Jeeves advice, for how a wet weed like himself can stand up to Sir Watkyn and Spode, so he can get through the engagement.
Jeeves offers him some advice, which we see quickly transforms Gussie.
He is suddenly radiating confidence, and insults Spode at a blackshorts meeting, when he happens to be blocking the road he and Bertie are driving down.

We find out that Jeeves advice was to think of all possible scornful thoughts about Spode and Sir Watkyn, so he no longer holds them in such esteem. Gussie however, goes one better, and writes them all down in a book, which he promptly looses.

Stiffy meanwhile is trying to talk her intended into stealing a policemans helmet to show he really loves her. She also chances across Gussies thought filled notebook.
Bertie and Gussie are meanwhile trying to track down the notebook, confront Stiffy who says she will return it if Bertie can get Sir Watkyn to agree to her marriage.

Gussie takes a newt as a peace offering to Stiffy, and when this is rejected (surprisingly), tries to wrestle the notebook from her, at which point Madeline enters the room. This causes her to immediately cancel the engagement, and with a swiftness that takes your breath away, notes she is now free to marry Bertie. He maintains a stiff upper lip, but is rather horrified at the prospect.

Meanwhile Jeeves suggest that if Bertie were to mention to Sir Watkyn that HE (Bertie) intended to marry Stiffy, Sir Watkyn would be so horrified, that when it turned out she really wanted to marry "Stinker" he would be so relieved it would be a dead cert.
However, he isn`t aware that his daughter Madeline has already mentioned she is now betrothed to Bertie, so when Bertie starts to hatch the plan it all backfires.
Sir Watkyn is overjoyed Bertie is seaking Stephanies hand, rather than his own daughters, and smiles on the union.

Are you confused yet? Who is promised to who, who still wants to get married to who, and who is trying to fool who? Welcome to the world of the Woosters!

All episodes are shot in great settings, whether at the ancestral homes in the country, or with Bertie at the Drones club.

Now throw in a couple more plot points, like a missing policemans helmet, a notebook that gets into the hands of those that its contents is direct against, and Spodes plans for the domination of England... how can even Jeeves huge brain find a way out.


The Cast
Stephen Fry continues to be the perfect Jeeves. His attitude is just perfect.
Hugh Laurie is also the perfect Wooster. He excels as the one to whom everything ends up happening. His chirpy "What-Ho`s" and "I say`s" fill out his character perfectly, and his way of looking into the middle distance as he considers his options are perfect.

The visuals are slightly less than perfect, occasionally not having the full richness of colour.
This is probably partly being shot for TV and possibly putting 3 50 minute episodes
on a disk.
The sound is Dolby Digital Mono. So nothing spectacular there. The action is all in the dialogue and situations though. The music is very nice though, periodic and absolutely appropriate.

Summary
In summary, its hilarious British comedy at its best, superbly portrayed by Fry & Laurie.
Extremely rewatchable, and the reasonably short episodes means you can slot them in when you don`t have time for an epic.
posted by Julian Onions on 13/2/2004 11:32