DVD
Goodies At LWT, The (UK)

DVD
Simpsons, The: Christmas With The Simpsons (UK) 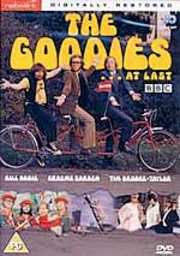 Ok - so I was a child growing up in the 70`s, and this disk is pure nostalgia. It was required watching in those days if you were not to be a social outcast in the playground discussions the next day.

The first episode, shot in 1970, includes Bill sucking on a sherbet fountain (anyone remember those - can you still get them?), and talking about avoiding paying 2` 6d to get into the tower of london. Yes - pre-decimalisation!
The Trandem also evolves throughout the disk, starting off as a tandem with a 3rd seat loosely attached to the back, to a full three seater version.

Its a type of humour you don`t seem to see these days - a lot of it pure slapstick, and the speeded up running sequences (as also seen in Benny Hill).
The episodes also contain the spoof adverts filmed at the time as take offs of (then) current adverts. Its better if you remember the original adverts, but they do stand alone.

The Plot
It starts with the formation of the goodies, a trio professing to do anything, anytime, anywhere - with usually inevitable consequences.
Through possibly their best material (well my favourite), "The Goodies and the beanstalk", the mystical arts of Ecky-Thump and onto Saturday night fever take off.
Again nostalgia rules, a brief excerpt from Nationwide, and Harold Wilson wielding a black pudding make appearances in Ecky-Thump! Many of the episodes refer to issue of the day, such as Mrs Desiree Carthorse, an obvious play on Mrs Mary Whitehouse - now long since deceased.

The Visuals/Audio
The sound is in mono, but considering the state of some of the original film, even that seems lucky!

The disk is actually a region 0 one.

The Extras
The film has been digitally restored, and there is an extra showing before and after of several sequences. Obviously the 30+ years lieing in the BBC archives haven`t been kind to it. I believe that a number of the original episodes have actually been lost according to the BBC website.

Other extras include
Outtakes - not particularly entertaining, but sort of interesting as you get to see them as they are for brief periods.
Commentaries on various of the episodes - there are some gems in here. How their montreaux entry was done, and how it missed. Some of the `special effects` and how they were done. Its more than 30 years since some of these were filmed, so they don`t always remember a lot of the details. They talk a bit about the production, the budget, the use of blue screen technology (very cutting edge for 1970`s). Bill about his fat and thin periods!

A laughter free version of the beanstork special.

Additional storyboard sequences for the beanstork, some of which were dropped for the eventual version. I found this intersting, because the development of each thing seems so haphazard its as though it was all ad-lib`d, so to see detailed story boards of the rediculous antics was revealing.

Broaden your mind footage (the series that preceeded it)
There are some easter eggs on the 2nd disk I stumbled across, that have brief original BBC announcers intro`s for the episodes.

I have no idea how people new to this material will like it - I remember rolling on the floor with laughter the first time I saw "The Goodies and the Beanstalk" but I was hardly into my teens at the time. Maybe times have changed.
Certainly by todays standards the humour is somewhat tame - in that its suitable for children, which is refreshing in itself.

I noticed a lot of sites have it listed at 77 minutes long - which is wrong - it is a 2-disk edition after all!
3 hours and 17 minutes I`ve seen elsewhere which is closer but still seems on the short side. The BBC sites leans towards 300minutes.
8 episodes at 30+ minutes each and the Beanstalk was an extended special episode. Plus the extras... seems 5 hours is more realistic.

Summary
Nostaliga for me, lots of funny slapstick and other gags, usually with comical inevitability. Many of the parodies will be missed by the modern youth, but I think there is still something here for everyone.
posted by Julian Onions on 20/1/2004 09:36