Review of Sunrise
added by
Sue Davies
Places to Buy 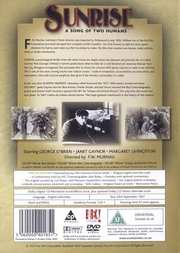 Back Cover of Sunrise

DVD
Best Years Of Our Lives, The (UK)

DVD
Lilies Of The Field (UK) 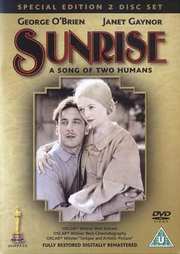 One of the most moving stories ever told on screen
Certificate: U
Running Time: 91 mins
Retail Price: £22.99
Release Date:
Content Type: Movie

Synopsis:
F.W. Murnau, Germany`s finest director, was imported to Hollywood in July 1926. William Fox of the Fox Film Corporation promised and gave him complete artistic freedom. Fox told Murnau to take his time, spend whatever he had to, and make any film he wished to make. The film that resulted was Sunrise, made entirely without studio interference. In 1927-28, Sunrise was awarded a special Oscar for "Unique and Artistic Picture" (the only time the award was ever given). In 1967, Cahiers du cinéma named it "the single greatest masterwork in the history of the cinema."

Sunrise, a psychological thriller from the silent movie era, begins when the pleasant and peaceful life of a naive country Man (George O` Brien) is turned upside down when he falls for a cold-blooded yet seductive woman from the city (Margaret Livingston). She persuades him to drown his virtuous wife (Janet Gaynor)in order to be with her. This is one of the most moving stories ever told on screen - a tale of temptation, reconciliation, reconsecration, and redemption, told with a lyrical simplicity that gives it the timeless universality of a fable.