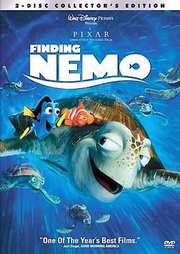 Synopsis:
From the Academy-Award-winning creators of Toy Story and Monsters, Inc. It`s Finding Nemo, a hilarious adventure where you`ll meet colorful characters that take you into the breathtaking underwater world of Australia`s Great Barrier Reef. Nemo, an adventurous young clownfish, is unexpectedly taken to a dentist`s office aquarium. It`s up to Marlin (Albert Brooks), his worrisome father, and Dory (Ellen DeGeneres), a friendly but forgetful regal blue tang fish, to make the epic journey to bring Nemo home. Their adventure brings them face-to-face with vegetarian sharks, surfer dude turtles, hypnotic jellyfish, hungry seagulls, and more. Marlin discovers a bravery he never knew, but will he be able to find his son? Finding Nemo`s breakthrough computer animation takes you into a whole new world with this undersea adventure about family, courage, and challenges.

Special Features:
Filmmakers` Visual Commentary including Deleted Scenes and Recording Sessions
Character Interviews
The Pixar Short Film "Knick Knack"
Making Nemo: A special documentary featuring footage on the creation of the film
Exploring the Reef with Jean Michel Cousteau and Characters from the movie
Review The Art of Nemo with living galleries narrated by the artists themselves
A number of set-top games and more!

Quite simply a magnificent piece of animation. This movie was just so fun and entertaining to watch. Probably one of the finest movies Disney will ever make. Way better than Monsters Inc and the Toy Story movies.

The story is quite simple, Marlin has lost his only son, Nemo, who has been caught by a fisherman. The fisherman takes Nemo and puts him in his small aquarium. Marlin meanwhile finds out Nemo`s location with the help of a fish with amnesia! Though they know the location, the journey is long and adventurous......

The picture quality is fantastic and colourful. Superbly sharp, the picture only suffers from some minor pixelation in certain scenes but this does not spoil the viewing. A glorious digital transfer. Disc 1 contains the widescreen version whilst Disc 2 has a fullscreen version.

The sound is a pitch perfect DD 5.1 Crisp and clear the soundtrack makes good use of the surrounds.

There are plenty of extras to wet everyones appetite. These are spread accross the 2 discs. On Disc 1 there is the in depth documentary about the making of the movie. There is an introduction to the dvd from the directors and a visual commentary. Disc 2 contains a couple of documentaries and some games. There is also a cartoon short, knick knack, which was made before Toy Story.

This along with Pirates Of The Carribean is definetly the best film of the year. Disney have been superb this year and have also released a great Lion King DVD. Can Disney score a hattrick with their up and coming Brother Bear? Time will tell.
posted by dicanio on 13/11/2003 21:42