Review of Matrix Reloaded, The
added by
Jitendar Canth
Places to Buy 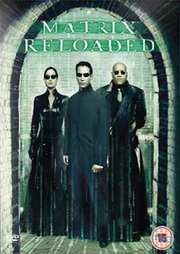 Synopsis:
In The Matrix Reloaded, Neo (Keanu Reeves), Trinity (Carrie-Anne Moss) and Morpheus (Laurence Fishburne) lead the revolt against the Machine Army as it attacks Zion, the last human city on earth, unleashing their arsenal of extraordinary skills and weaponry against the forces of repression and exploitation. In their quest to save the human race, they gain greater insight into the construct of The Matrix and Neo`s pivotal role in the fate of mankind...

Special Features:
Preload (behind the scenes overview)
The Freeway Chase
What is The Animatrix? Enter The Matrix
The Matrix Unfolds
2003 MTV Movie Awards Matrix Reloaded parody
Get Me An Exit - Matrix inspired advertising
Weblinks

The second installment in the Matrix Trilogy and its quite good considering. Bridging the gap between the beginning and the end of a trilogy can be quite a hard task especially if the ending has already been thought up. Thankfully this movie does that quite well. The story begins some time after the first movie. There are sentinels digging into defences of the city of Zion and its only a matter of time before they get through. Neo and his crew set out to find the keymaker, who maybe helpful.
The picture is razor sharp and almost crystal clear. Sound also is magnificent and very dynamic.
The second disc is packed full of extra features, many of which are to do with other things and not the movie itself(The game, Animatrix, MTV parody etc) but there are some good extras for the film like the making of the freeway chase. A solid set of extras.
Overall a great package for matrix fans, a solid second installment.
posted by dicanio on 17/10/2003 19:37
10 / 10

Some people love the sequel, some people are dissapointed.
Put me FIRMLY in the first camp!

For me the matrix works on som any levels, and the follow up "matrix reloaded" only makes things better for me.
In the first film, we find a paradigm shift, when we discover all people are living a virtual life, and there is a life outside this. In this film, we get to find that some of the truths exposed in the first film are only half truths, and that there is a lot more going on.
This could have been a normal sequel, with lots more of that same, capitalising on the success of the first, but for me the plot is still alive and well and going forwards in this film.


The effects are great, the fights outstanding and the action relentless. Of course its hard for it to make the impact of the first film, as it is arguable the first film inspired almost a new genre of films, and you can`t really do the same in a sequel. The IMDB lists the matrix "Bullet Time" being used in more than 20 movies since, so it clearly had an influence.

The video transfer is great, having a whole disk devoted to it.
The sound is also great.
The extra features on the 2nd disk are interesting, but whilst some of the extras are good, I find some of them a little self indulgent, or maybe perhaps just a little to much on the publicity side of things. I like to be informed by the extras, rather than blitzed with publicity, and sometimes I think they crossed the line a bit. Still - they ARE extras, and not the main event, and they are worth a watch.

I would have loved a commentary too - but you can`t have it all.

The MTV spoof is just hilarious. The takeoff of the architect is magnificent and makes you think twice watching the real scene again after seeing that (does he really say Ergo that much?).

"The Matrix" was a great movie about half a decade ago, so I had truly high expectations from "The Matrix Reloaded" when I went to see it in the theater a couple of years ago.
That night in the theater had to be my worst nightmare. The movie sucked. BIGTIME! The entire movie seemed like an excuse to show some high-tech Kong fu scenes and very little actual content was present in it.
Watching the movie again, a couple of years later (and having not seen the 3rd movie yet) I can sum it up in a single word. Boring. Special effects are cool, but the cannot compensate for a lack of plot. Not in this case, at least.
The video transfer is very good. The movie has a very distinct greenish color palette and the transfer is 100% compression sign free. The special effects are spectacular, but enough is enough!!! No more "bullet-time", please!
The DD 5.1 soundtrack is very good, too. The surrounds are constantly used, still, I was looking forward to a more aggressive soundtrack.
The menus are animated with sound.
The extras include a detailed behind the scenes featurette, a cute parody (taken from the MTV music awards) and some explanations about the special effects. Why the is no commentary is really beyond me.
Bottom line - this is a decent 2 disc-set for an average sequel. I just hope the final episode is much, much better.
posted by Zvi Josef on 1/11/2005 19:57