Review of UHF
added by
John Savage
Places to Buy 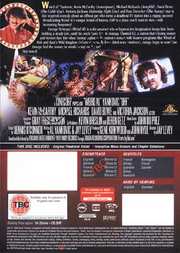 Back Cover of UHF

DVD
Simpsons, The: Christmas With The Simpsons (UK)

DVD
Getting Even With Dad (UK) 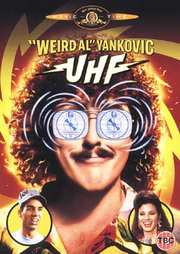 Aside from Yankovic playing most of the characters in the film, DAVID BOWIE, MICHAEL RICHARDS, (Kramer from TV`s Seinfeld), FRAN DRESCHER, (the star of The Nanny TV series), and KEVIN MCCARTHY (The Howling, The Invasion of the Bodysnatchers) also appear in this inspired comedy which is packed full of gags, film parodies, music satire and tons of laughs.

Opening with an hilarious parody of the starting sequence of Indiana Jones and Raiders of the Lost Ark, Yankovic spoofs films and television from Rambo to Conan, Gone With The Wind to The Beverly Hillbillies and Blazing Saddles and Close Encounters of the Third Kind. Yankovic plays a loser who is fired from his job and starts a TV station called UHF in which they make fun of some of shows and movies.