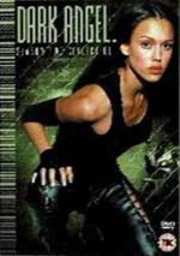 Synopsis:
Max Guevera (Jessica Alba) is a beautiful, unique girl. She should be, she was designed that way. Engineered in a secret top government lab twenty years ago, Max and her genetically enhanced siblings were created to be the perfect soldiers... until they escaped. Now, ten years later, against the backdrop of a post-apocalyptic Seattle, Max is on a quest to reclaim her past by finding her fellow escapees. But she`s not the only one looking... This release features all the episodes from Season Two of the James Cameron production Dark Angel.

A decent sci-fi series that was cut short in it`s prime.
After a great first season, Dark Angel looked like it was destined for potential greatness. Our gorgeous heroine, Max (Jessica Alba) has released her genetically bred brothers and sisters into the real world, and insodoing has destroyed the base of operations that created them. Of course there are wheels within wheels (as in any good conspiracy based story), and although Max seems to have destroyed Manticore she`s released an even more powerful dragon in the form of an ancient cult, hellbent on her destruction, and powerful enough to reach into the higher echelons of Government. It`s Buffy meets the X-Files with some truly excellent action sequences, good stories and solid acting from its cast.
Dark Angel never seemed to receive the studio backing that it needed, despite it`s James Cameron pedigree. This second season is weaker than the first, but by no means deserving of Fox cancelling it so abruptly. There are some sparky new characters - Alec and Ames White stand out - and the introduction of a new evil agency all add intriguing new dimensions to what has gone before. Too many episodes, however, seem to act as padding, adding little to the overall pace of the story. There really are only so many times that Alec getting Joshua into trouble can really hold the viewer`s attention. That being said, and as often seems to be the case with soon-to-be-cancelled shows, the series` final few episodes really pick up the pace and make sure we leave on a high. The final episode `Freak Nation`, directed by James Cameron (apparently in a (failed) bid to gain enough interest from the viewers to urge the studio into backing a third series), is a little heavy handed for my taste but does contain a cracking Die Hard-style seige, and gives Dark Angel a suitably `up yours` ending.
The extras, (a 6 minute featurette, and a game Trailer) like the first season release, sadly do the series no justice, and, to be honest might as well have not been there.
As always with Fox TV DVDs the visual presentation is great, and although the audio isn`t given the 5.1 mix of the likes of 24, it holds its own well. The problem with the package is not the series content but rather the lacklustre way in which it has been released. The price won`t do its sales any favours, either!!!
If you`re reading this then you`re already intrigued by Dark Angel. If that`s the case, do yourself a favour, look around for a good deal on this fine series box-set. Buy it. And enjoy it!!!
posted by Woodie on 20/1/2005 00:30