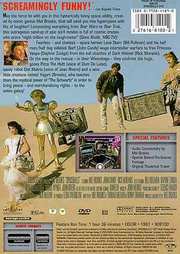 Back Cover of Spaceballs

DVD
Princess Bride, The (US)

DVD
You Only Live Twice: Special Edition (James Bond) (US) 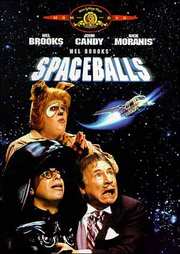 Synopsis:
May the farce be with you in this hysterically funny space oddity, created by comic genius Mel Brooks, that will send you into hyperspace with fits of laughter!

Lampooning everything from Star Wars to Star Trek, this outrageous send-up of epic sci-fi movies is full of cosmic crazies who score "eight trillion on the laugh-meter" (Gene Shalit, NBC-TV)!

On the way to the rescue - in their Winnebago - they confront the huge, gooey Pizza The Hutt (voice of Dom De Luise), sassy robot Dot Matrix (voice of Joan Rivers) and a wise little creature named Yogurt (Brooks), who teaches them the mystical power of "The Schwartz" in order to bring peace - and merchandising rights - to the entire galaxy!

Spaceballs is one of the funniest comedies I have seen from the year 1987 and the dvd
was a must have for me. It`s acted, directed, produced and written by Mel Brooks,
who also made that stupid Robin Hood comedy called Men In Tights. I can`t say that
I`m a Mel Brooks fan, because I haven`t seen many of his works, but I can say that
Spaceballs is really funny, actually so funny that you can watch it over and over
again with good laughts every time. There`s only few comedies like Naked Gun and Fletch
Lives that are able be as funny as Spaceballs, but still Mel Brooks`s Spaceballs is my favourite.

The reason why it`s so funny is those jokes about Star Wars & Star Trek and I happend
to be a huge Star Wars fan so this is a superb comedy for me. There`s also some jokes about
the Ridley Scott`s Alien in the end and it was really funny when the chestbuster started to sing (in the breakfast scene they used the real John Hurt and he looked just like the same as in the original Alien, cool)

The cast of this movie is great, with actors like Rick Moranis (Dark Helmet, heh) who happends to be the funniest one in this movie and then there`s John Candy (Barf) half man half dog, he`s own best friend, Bill Pullman (Lone Star) who is maybe the second funniest and after watching he`s performance as a Lone Star it`s hard to watch ID4 without laughing to him. There also appears Daphne Zun**** (Princess Vespa), Mel Brooks (President, Yogurt, Dark Helmet hates "yogurt") +the voice of Dot Matrix is Joan Rivers.

Spaceballs in filled with brilliant Star Wars jokes from the force, lightspeed and lightsabers. Those are modified into the mystical power of The Schwartz, and lightspeed has got 2 more faster options like "ridicilousspeed" & "luridicilousspeed" or something like that and the lightsabers and now the rings.
Spaceballs has got some hysterically funny lines like "I`m your fathers, brothers, cousins, roommate" or something like that says Dark Helmet to the Lone Star and many many many good jokes.

The Mgm Spaceballs packaging is nice with keep case covers and there`s a little collectable booklet giving some information about the characters and the disc is two sided, with optional 1.85:1 widescreen letterbox and 1.33:1pan & scan. There widescreen format is a bit better one of these, giving more stuff from the sides, but pan & scan looks also quite nice. The picture quality seems a bit old, but the colors are just wonderfur and it`s mainly quite clear. Some desert scenes had some grain in the blue sky, but pretty nice transfer anyway. The best thing about this disk is the audio, which is luckily Dolby Digital 5.1 English and it sounds
just superb. The sound balance is really good, chancing nicely from left to center and center to right and so on. This is the best sounding Mgm dvd I have ever heard with powerful special effects and clear soundtrack.

The menus are also very good with funny animation, sounds, and lots of different colors & "lights that don`t do crap". Flying cows, astronauts and lots of movings stuff. The extra features includes Audio commentary by Mel Brooks, nice about 10 minutes making of featurette and trailer. You better buy this disc if you`re a sci-fi fan or you enjoy crazy comedies.

Compared to MGM`s usual back catalogue treatment, this DVD is pretty good. The picture quality is excellent although it does not have anamorphic enhancement. The sound is also very good and serves the film well. The extras aren`t too bad either. A trailer, a fairly interesting 8 and a half minute featurette and an audio commentary from Mel Brooks. Although he tends to ramble at times, Mel reveals plenty of information about the making of the film. Overall, this disc is recommended.
posted by AD1986 on 6/8/2002 22:41