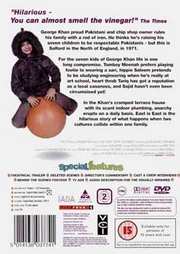 Back Cover of East Is East 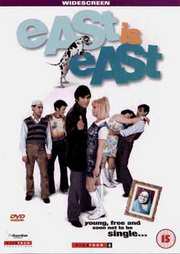 Synopsis:
George Khan, proud Pakistani and chip shop owner, rules his family with a rod of iron. He thinks he`s raising his seven children to be respectable Pakistanis - but this is Salford in the North of England, in 1971.

For the seven kids of George Khan life is one long compromise. Tomboy Meenah prefers playing footie to wearing a sari, hippie Saleem pretends to be studying engineering when he`s really at art school, heart throb Tariq has got a reputation as a local Casanova, and Sajid hasn`t even been circumsised yet!

In the Khan`s cramped terrace house with its scant indoor plumbing, anarchy erupts on a daily basis. East is East is the hilarious story of what happens when two cultures collide within one family.

A very watchable film, with a bright 70s feel, both visually, and aurally.

I don`t usually buy region 2, as they are expensive, compared to personal imports, but made an exception in this case, as I had read good reviews, and it is a FilmFour production (Seal of approval, but they do have that lengthy logo that you can`t skip, a bit like the FBI notice on region 1)

Anyway, the DVD. The film is a slice of the life of George Khan and his family, comprising his English wife, (No 2, No 1 is in Pakistan) and 7 children living in Manchester in 1971.
And pretty much follows the plot synopsis on the packet.

Contents:(Verified on my copy)
Animated menus, complete with space hopper,
Directors commentary,
A few deleted scenes, although not enough,
Subtitles for the hard of hearing,
Audio description track
Trailers,
Cast and crew interviews,
Making of featurette.

Quite a nice package!

My niggles came about after listening to the Directors commentary.

1) Although Damien stresses that it is a film about families, not about Pakistanis, I can`t see this material working if it were not for the English wife and the fact that the family were Pakistani. Perhaps I am missing his point here: does he just mean anyone can watch it?

2) Damien talks about a few scenes which were cut eg Meenah`s dance sequence, but these do not appear in the deleted scenes portion of the disc.

3) The cast interviews seemed poorly cut to me, some of the natural flow was removed and made very jerky by the way it was done, also not all the cast got to speak.

Points 2 and 3 could have been improved, the rest of the disc seems well thought out, and its not as if the disc is full (92 mins for the main feature)

Buy it, you won`t be sorry.

What a disappointment! I was so much looking forward to another brilliant British movie, but BOY was I wrong.
The movie describes the so called life of a Pakistani family in the early 1970`s in the UK under the rule of the family`s Nazi father. Well, Nazi in a Pakistani kinda way, at least. Unfortunately, a lot of Muslim (and traditional Jewish ones as well) live in that manner nowadays and that makes the movie tragic rather than comic.
The video transfer is average. I did not spot any compression marks.
The DD 5.1 sountrack is a waste of time. It`s almost as if the movie was recorded in mono.
The menus are animated with sounds and are quite nice.
the extras include a commentary, a couple of interviews, a behind the scenes look, some deleted scenes and an odd feature-long audio description (for the visually impaired).
Bottom line - a total disappointment, sorry.
posted by Zvi Josef on 10/11/2000 18:34