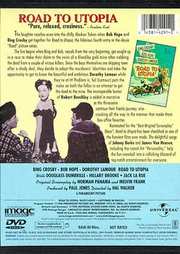 Back Cover of Road To Utopia
Related Items

DVD
Cocoanuts, The (US)

Road To Utopia (US) 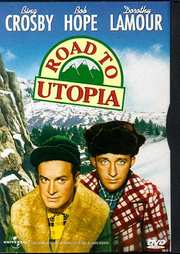 Synopsis:
The fourth of the "Road" films finds Bob Hope and Bing Crosby in Alaska posing as escaped killers in order to find a secret gold mine.
The fun begins when Bing and Bob, rascals from the very beginning, get caught up in a race to stake their claim to the veins of a Klondike gold mine after nabbing the deed from a couple of vicious killers. Since the boys themselves are skipping town after a shady deal, they decide to adopt the murderers` identities and take the opportunity to get to know the beautiful and ambitious Dorothy Lamour while they`re at it!

The 'Road' films started in 1940 with 'Road to Singapore' this was conceived as a musical using the talents of three Paramount contract stars - Bing Crosby, Dorothy Lamour and Bob Hope. As the production commenced both Bing Crosby and Bob Hope got their own scriptwriters (people who worked on their Radio shows) to help liven a rather flat script. The result was a gentle humorous romp that proved very popular - even in wartime Europe. Studios have never been slow to do follow-ups. So 1941 saw 'Road to Zanzibar' and 1942 'Road to Morocco'. Because of the war there was a gap of 4 years before Crosby, Hope and Lamour were reunited in 'Road to Utopia'

After the first film the characters are always the same, a vaudeville duo and a femme-fatale (Crosby, unsurprisingly, is a smoother song-and-dance man than Hope). The style of 'Road to Utopia' makes fun of some film styles that were getting rather overused in the 1940's - the framing of the story as flashback and the use a narrator/commentary; in this film the narration is by the unforgettable Robert Benchley.

The story is the simple 'Lost Treasure Map mark 1'.
San Francisco, Sperry and McGurk (Robert Barrat and Nestor Paiva) - their names alone are enough to clear a street - kill - and steal a map to a Klondike gold mine. The map belongs to Sal (Dorothy Lamour) who is told to go to Skagway and find Ace Larson (Douglass Dumbrille) who will help her get it back. Ace Larson, of cause, want the mine for himself. Duke Johnson (Bing Crosby) and Chester Hooton (Bob Hope) are performing in a variety hall (trying to scam the audience) when Sperry and McGurk, chased by police, destroy their show. Chester and Duke have to leave town and eventually find themselves on the steamer to Alaska. Chester and Duke find the map and, disguised as Sperry and McGurk, hit town. Sal, duped by Ace Larson into working for him, tries to get the map, her map, away from what she thinks are the killers.

Much merriment and double-crossing ensue, after all poor old Hope is always being put upon by Crosby, and neither trust each other in two particular areas - money and women - and not necessarily in that order. Never ones to worry about the logic of the situation, in one scene the two of them are stoking the ship's boiler, when a man in full evening dress walks through and they ask "Are you in this picture?" "No," he replies, "I'm taking a short cut to Stage 10". Later on while on a dog sled in Alaska Hope looks up and says "Ah! Bread and Butter" Crosby says "It's just a mountain" while Hope says that it might be a mountain to you its bread and butter to me; the shot of the mountain turns into the Paramount Logo.

As in all the films Hope and Crosby are the only ones to make jokes - and actually its mostly Hope. Everyone else plays mostly straight - if slightly over the top. You cannot have everyone making jokes if you want to have any sort of plot. Although the principals all sing songs from Johnny Burke and James Van Heusen it's Dorothy Lamour and 'Personality' that became a hit away from the film.
'Road to Utopia' is the only 'Road' film where Hope 'gets the girl' and it provides a final joke that`s about as racy as anything you`ll find in a 1940's studio film.


The periodic narration by Robert Benchley, famous to 1940's audiences for his charming, dry shorts that frequently preceded feature films, opens the film with the caveat: "For one reason or another the motion picture you`re about to see is not very clear in spots. As a matter of fact, it was made to demonstrate how not to make a motion picture, and win an Oscar"; and at one point he`s looking down at the action and remarks, "This seems to be a scene they put in after I saw the picture at the studio".
The screenplay was nominated for the 'Best Original Screenplay' Oscar.

The DVD is from Image Entertainment under their deal with Universal. The film it is not a restored print but still Image have managed to get an excellent copy, the black and white picture has wonderful contrast with solid blacks and even the 'day for night' scenes look clear. With very little scratching, and in the original 1.66:1 ratio this is just as a 1946 film should be. The sound is Uncompressed PCM, which quite frankly, sounds very good in Mono - and a lot better than some Dolby mono tracks.

This is my favourite of the 'Road' films and one of my top twenty on ymdb, therefore it will not surprise the reader when I say that I would recommend this film to everyone.