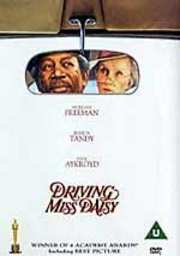 Synopsis:
An elderly matron manages to crash her 1948 Packard into her next-door neighbour`s garden. She is unhurt after the accident but her son, fearing for his mother`s safety, hires a chauffeur, a canny black widower in his early 60`s. The relationship between the southern matron and the black chauffeur forced on her by her son is examined in this adaptation of Alfred Uhry`s decades-spanning stage play. Reluctant to surrender her independence, Miss Daisy ignores the driver until he patiently wins her over.

Between nagging sessions, she teaches him to read and he teaches her about how much they have in common. As the long turbulent years pass, the Jewish woman and her black servant develop a respect and deep friendship for one another

Every now and then a gentle unpretentious film slips by with the Academy Award for Best Picture, "Driving Miss Daisy" managed it in 1989.

Written by Alfred Uhry, based on his Pulitzer Prize-winning stage play, and directed by Bruce Beresford "Driving Miss Daisy" has a simple, straightforward plot with an edge of racial prejudice, bigotry and cynicism that meld into a wonderful story of two elderly people going through life, getting old and watching the world change around them.

The story spans the twenty five years from 1948 to 1973 and the lives of several Southern people living in Atlanta, Georgia. Miss Daisy Werthan (Jessica Tandy), a well-to-do, elderly Jewish widow, living alone, with only Idella, (Esther Rolle) a combination maid/cook for help, finds herself not allowed to drive her car anymore. Her son, Boolie (Dan Aykroyd), hires an older black man, Hoke Colburn (Morgan Freeman), as her chauffeur. Although initially resistant to the idea of having someone drive her around, Miss Daisy eventually accepts Hoke`s assistance, and after some years she strikes up a relationship with him that transcends mere employer-employee; by the time they have both reached a considerably old age, they have become best friends.

Miss Daisy is described as 'high strung', but that`s too kind; in fact, she is a grouchy, crotchety old lady. After Hoke is hired, it takes him six full days to get Miss Daisy to allow him to drive her to the store; "...the same time it took the Lord to make the world," he remarks. For those who say that the sort of friendship portrayed was not possible in the South in those times author Alfred Uhry counters by saying he based his characters on real-life people he knew - his own grandmother and her driver - and that he had always observed them behaving toward one another just as the characters do in his screenplay.

The two stars were largely unknown to the cinema audience in 1989. Jessica Tandy had played supporting roles in films for well over fifty years but was mainly a Broadway star who was not too well recognized in films; and Morgan Freeman had been in films for almost twenty years but only in minor or supporting roles. Also, Dan Aykroyd was best know as a comic from films such as 'Ghostbusters' and had seldom played a straight, dramatic part. The film`s popularity and its winning several Academy Awards came as a shock to a lot of Hollywood insiders.

The film`s pokes at racism are as gentle as its humour, but they also sting, and the behaviour of whites toward blacks is not the only target. Daisy calls blacks 'children'; she disapproves of her daughter-in-law 'socializing with Episcopalians' and trying to look Christian by having a Christmas party. In one of the film`s most memorable scenes, we`re reminded that Daisy is as much an outcast in the post-war South as Hoke. Two traffic cops who`d stopped Hoke merely for driving a nice car watch him drive off with Daisy. 'An old n***** and an old Jew woman taking off down the road together', one cop says to the other. 'That is one sorry sight'.

The movie works - with its inspiration deriving from Hoke`s patience and understanding and Miss Daisy`s gradual acceptance of Hoke as a personal friend and companion. As the years go by, we see that life is, after all, passing and changing. About the best we can do is cope with it and try to make things a little easier for one another. Miss Daisy and Hoke do just that.

For reasons only known to the select few at Warner Brothers, here in the UK, the DVD, released in 1999, was one of those with a fullscreen copy on one side and a 1.85:1 widescreen enhanced for 16x9 televisions copy on the other. In the US, apparently, they have never had the widescreen version until the recent special edition. The picture quality is excellent, remembering that the photography has a beautiful soft focus sheen - with muted colours, particularly the interiors.

The sound is Dolby Stereo Surround, which allows the dialogue to come through clearly (rather important in a wordy film), but allows for the ambient sounds of the scenes to come through as well - be it the quiet of the house, the sounds of the street or the noise of the cotton mill. Music is very personal, but (for a change) I really love Hans Zimmer's haunting - even dainty - theme as it weaves back and forth through the film.

The only extras on the disc are some production notes and a trailer.

All in all you have a warm, cosy, genial human drama that says more about getting along with other people than many more overtly 'message' films ever have.
posted by Tony Myhill on 19/3/2003 12:21