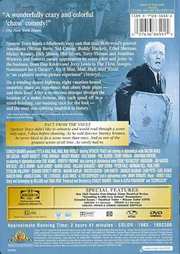 DVD
On The Beach (UK)

DVD
Defiant Ones, The (UK) 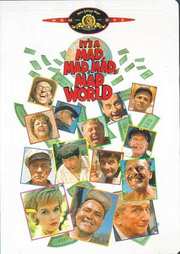 On a winding desert highway, eight vacation-bound motorists share an experience that alters their plans - and their lives! After a mysterious stranger divulges the location of a stolen fortune, they each speed off in a mind-bending, car-bashing race for the loot - and the most side-splitting laughfest in history.

"It's A Mad, Mad, Mad, Mad World" followed "Around The World In 80 Days" as one of the first grand scale comedies. Dated by today's so-called comedies (there are no bodily function or gross sex scenes - just good jokes - both verbal and visual). Stanley Kramer's comedy classic has been released on DVD by MGM Home Entertainment with an excellent special edition. Presented in a brand new anamorphic transfer, along with a few goodies from the laserdisc release of a decade ago.

Starring just about every funny man and woman working in America in 1962, "It's A Mad, Mad, Mad, Mad World" begins with a car speeding along a desert mountain highway, dodging the other sauntering vehicles. Sailing off an embankment, the car crashes. Some of the motorists stop and climb down to assess the damage. They find an old man, barely alive. With his last gasps, he tells the would be rescuers of a hidden stash of money - $350,000 - hidden under a big 'W' in Santa Rosita Park, some 200 miles away, he bequeaths it to his witnesses and then…he kicks the bucket. Quite literally. The stunned parties meet on the side of the road, first to determine if the old man was telling the truth and then to plan a course of action for retrieving and dividing the money. Talks of 'shares' and 'quarters' soon change to war cries of 'every man, including the old bag, for himself!' Let the race begin.

The premise of a motley group of characters, flung together by chance and propelled by greed towards a prize of fabulous wealth was used in films before "It's A Mad, Mad, Mad, Mad World" and has been used many times since e.g. "Cannonball Run" or the utterly dire "Rat Race" from 2001. None of the subsequent films has come close to the comic frenzied mayhem and utter stupidity that this greedy bunch gets up to.

Producer/Director Stanley Kramer seemed the last person to take on "It's A Mad, Mad, Mad, Mad World" as a project. Known for his 'message' films including "High Noon", "Inherit The Wind" and "Judgment at Nuremberg," Kramer's films were always serious and meaningful. "It's A Mad, Mad, Mad, Mad World" proved he could do comedy as well. The film works as well today as it did in 1963. (The Cinerama Dome in Hollywood was being built as the film was made so the decision was made to optically enhance the 65mm negative as there was no other Cinerama film to play in the cinema - the film played for over a year. But then this was a lifetime away from the Multiplex and 3000 print releases.)

The script by William and Tania Rose (in the documentary, Milton Belle says there were actually two scripts: one for dialogue and one for physical 'cues') works perfectly because of the slow built-up during the first half - before all hell starts to break loose after the intermission. For the first half, the characters beg, borrow, steal, cajole, fly, bicycle, drive and skip along their journey, all the while under the surveillance of the seemingly stoic Captain Culpepper (Spencer Tracy), who has been trying to solve the case of the missing money for the last fifteen years. The initial group of treasures hunters grows along the way. Employing a host of people who make up the history of American entertainment, the cast was a once in a lifetime gathering of comedians (in alphabetical order as a running gag in the credits says): Milton Berle, Sid Caesar, Buddy Hackett, Ethel Merman, Mickey Rooney, Dick Shawn, Phil Silvers, Terry-Thomas, Jonathan Winters, and Edie Adams and Dorothy Provine make up the core group, with cameos and incidental roles made up from representatives of the silent era (such as Buster Kenton and ZaSu Pitts) through the Thirties and Forties (Jack Benny, Joe E. Brown and the Three Stooges pop up in "blink-and-they're-gone" walk-bys) up to the '1963 present' (Jerry Lewis, Carl Reiner and Jim Backus for example).
The problem for audiences outside the US today - as much as in 1963, is that most of the cast were, and are, completely unknown. Television had not yet told the world that 'America is Funny'.

There is no need to go into too much detail - but certain scenes - such as Jonathan Winters destroying a gas station (the timing alone, not to mention the stunt work and prop handling, as detailed in the documentary, was a nightmare to choreograph), Sid Caesar's hopeless battle against a locked basement door, and the finale involving a condemned building and a fire engine mechanical ladder give an idea of what to expect - along with Ethel Merman's shrill mother-in-law caricature and Phil Silvers' umpteenth 'Sgt. Bilko'. Many of the sight gags involve the breakdown of machinery - Cars crash, planes roll, mechanical ladders buckle, timed to the moments when the characters depend on them most.

Originally the film ran 191 minutes. The length dwindled as it made its way from premiere to road show engagements and finally into general theatrical release. This version has been lovingly restored by Robert Harris and brings us to the current 161 minutes. Interestingly, the disc has the intermission music and exit music but not the overture. (The Shirelles dance sequence, referred to in the credits is not in the film or the deleted scenes and may be lost forever.)
The back cover of the DVD box describes the feature presentation as a 'New 16x9 Transfer from Original 35mm Theatrical Version', this is clearly wrong as the film was made in 'Ultra Panavision' a 65mm negative format with a 2.55 aspect ratio. There is also a logo that says the films is in 2.55:1 enhanced for widescreen TV's. Colours are stable and brilliant and the solid red background of the opening credits never exhibited any break-up. However as the print has been made up of all the best bit that are left - and MGM have not spend the million dollars plus that was spend by CBS/Fox on the restorations of "My Fair Lady" or Columbia for the restoration of "Lawrence of Arabia" some hues appear slightly saturated in some scenes, and in some other scenes there is a definite red shift. Deep blacks and balanced contrast levels, however, bring out a lot of details. A few shots show edge enhancement, but otherwise the image is free of digital or compression artefacts.

For those worried about a 3hr film and 2 hours of extras this is one of those disks with the film on one side and the extras on the other.

Perhaps I should point out that the Region 2 version - for reasons known only to MGM - has only a trailer as extra.

The remastered Dolby Digital 5.1 audio sounds very clean and dynamic for its age. Dialogue cross talk is spread across the entire front soundstage instead of anchoring in the centre channel, which was the normal mix for a 70mm or even a CinemaScope film of the time. The surround comes alive with Ernest Gold's witty, 'merry-go-round' score. Except for the music, the rear channels are pretty much silent. A 5.1 French language track is included, as well as French and Spanish subtitle.

The supplements start with almost an hour of 'extended scenes'. Actually, a more precise title would be 'extended/deleted/alternate takes'. Varying in quality, the scenes run from four-second blips of dialogue and gestures to excised scenes running a few minutes. The snippets are chapter marked, for a total of fifty-six stops. In some scenes, specifically ones where characters are framed by their rectangular car windscreens, optical distortion 'squeezes' everyone in, leaving the sides tall and skinny and the middle accurately proportioned. Some of these scenes (The Phil Silvers episode for example) would have made the story a little more understandable.

'Something A Little Less Serious' is an hour-long retrospective, marking a kind of reunion for the surviving cast and crew. Originally produced for the laserdisc release in 1991 the documentary features interviews with Stanley Kramer, Milton Berle, Jonathan Winters, Edie Adams, Sid Caesar, Buddy Hackett, Mickey Rooney, Carl Reiner and for some strange reason Jerry Lewis (he's in the film for fourteen seconds), composer Ernest Gold and special effects supervisor Linwood Dunn.
In some ways, the look-back is the usual 'Mutual Admiration Documentary'. Clearly everyone has fond memories of the film and their co-stars. The 'cross reference' style of the documentary echoes this, with everyone glowing about everybody else. Berle praises Caesar, Caesar celebrates Adams, Hackett salutes Rooney, Winters lauds Merman, and so on. For the first 40mins the affection the cast had for each other and for Kramer's juggling all their egos gives the documentary a genuine interest, but it then degenerates to the usual smarmy made-for-cable PR love-in.

An article in the Los Angeles Times by film preservationist Robert Harris
talked specifically about the sad state of "It's A Mad, Mad, Mad, Mad World." He remarked about the lost scenes and how, if the film was not properly restored, it may be lost forever. For more details on the restoration just look at the web site hometheaterforum.com/madworld/mad.html (and don't forget the W's)
Some may argue there are more important films to restore than this overblown, aging comedy but for anyone willing to watch the film, they will find something very funny there.

This is a timeless, classic comedy of which many remakes have been made, but all have failed to live up to this original movie. I have to admit, this was the first time I saw this movie and the 3 hours just whizzed past. Its not often one can watch a 3 hour movie(or near enough) in just one sitting, without taking a break or something. This is really something special. No key moments stand out as the entire movie, every single bit, was a joy to watch. Everybody knows the story, man about to die, tells a group of complete strangers about $350K hidden under a big W in a Santa Rosita Park. The hilarious race is on to find it.

The picture quality is amazing. Quite simply eye popping for a movie of this age (40 years old). It is clean and sharp with some minor dust specks. Superbly presented in the widescreen aspect ratio of 2:35:1, this is a glossy picture with great colour saturation and excellent detail.

The sound is a marvellous DD 5.1, greatly restored and remastered. There are no echo effects or hissing of any sort. This was brilliant as MGM hardly seem to have DD 5.1 soundtracks for any of their classic movies, which are mainly 2.0 or mono.

There are plenty of fantastic extras including an all new documentary which is basically a retrospective on the movie. There are also loads of rare extended scenes that were a joy to watch. Again this is quite shocking as most MGM dvds only seem to have a bare trailer, especially the more older movies.

A fantastic movie on a flawless disc. An absolute must own. MGM need to produce more dvds like this.
posted by dicanio on 20/5/2003 05:13