Review of Great Race, The
added by
Mark Oates
Places to Buy 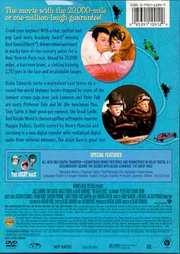 Back Cover of Great Race, The
Related Items

DVD
First Men In The Moon (US)

Great Race, The (US) 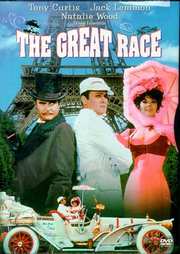 Black Edwards turns a marvelous cast loose on a round-the-world highway booby-trapped by some of the funniest screen gags ever. Jack Lemmon and Peter Falk are nasty Professor Fate and his dim henchman Max. Tony Curtis is their good-guy nemesis, the Great Leslie. And Natalie Wood is cheroot-puffing suffragette reporter Maggie DuBois. Zestily scored by Henry Mancini and ravishing in a new digital transfer with revitalized digital audio from restored elements, The Great Race is great fun!

I have loved Blake Edwards' "The Great Race" since the first time I saw it as a 70mm Road-Show. Its quirky characters, the locations and of course the zany comedy all appeal to my sense of fun. Having this film on DVD is wonderful, but it was crowned by the fact that the quality of the presentation from Warner Home Video quite exceeded my expectations.

The Great Leslie (Tony Curtis) succeeds in anything he does. He is a showman and manages to always catch the limelight. On the other hand Professor Fate (Jack Lemmon) with his assistant Max (Peter Falk), must be Acme's greatest customers, as everything they do fails - particularly their attempts to rid the world of The Great Leslie. One day, the Great Leslie has the idea to initiate a race around the world, from New York to Paris, in order to promote a new car. Immediately Professor Fate takes up the challenge and enters the race along with many other competitors. But he cannot win by playing fair, he must cheat. He just wants to beat the Great Leslie for once - at any cost. Add a feminist reporter, Maggie DuBois (Natalie Wood), who insists on covering the race - even if it means entering it herself, and the resulting mayhem is a riotous and charming comedy tour from New York to the Mid-West, the Arctic, to a strange European kingdom and finally, Paris.

The film's flair comes from the atmosphere of Tony Curtis (as the White Knight) and his assistant Hezekiah (Keenan Wynn) striving to win - but fairly - and not quite noticing that Jack Lemmon and Peter Falk (always in Black) - are doing everything they can to stop/destroy/kill him - with incredibly ingenuity, but completely ineptly.
Jovial at times and funny and silly at others, the film is filled with great moments. Whether it is the homage to the great Laurel and Hardy - which is perfectly played out by Lemmon and Falk throughout the film - or the innocence of the romantic encounter between Tony Curtis and Natalie Wood, everything is as carefully crafted as you would expect from as good a director as Blake Edwards.

There is no need to bore people with details of the plot as the film has been on television many times - nearly always in appalling pan'n'scan. Seen in its proper ratio not only is the picture better, the jokes are funnier.

Presented in its original widescreen aspect ratio, the transfer is enhanced for 16x9 TV sets and is virtually free of defects or blemishes. It has been entirely cleaned up and every scratch or dust mark has been removed to create an immaculately clean presentation. The transfer is also free of grain or discoloration and is rich with detail where the colours are vibrant and lively without ever appearing over-saturated. The image also has beautiful depth. Blacks are deep and solid, creating shadows that are finely delineated and contain good details without breaking up. Professor Fate's omni-black costumes and gadgets are perfectly countered by the Great Leslie's all-white appearance on the screen. Warner Home Video has definitely given this film the attention it deserves.
The DVD is just as good on the audio. The original track has been remastered and is presented in full Dolby 5.1, while the use of surround may be limited, the dynamic range and frequency response shows why the film got the Oscar for Best Sound Effects (1966) plus four other nominations. To hear the difference, just switch, for a moment, to the mono French track that is also on the disc.

"The Great Race" contains a featurette entitled "Behind The Scenes With Blake Edwards' The Great Race." It's a look at the production during the shoot of the film in 1965 and it's interesting in its vintage quality. Obviously made as an exhibitor sales film, there is just a voiceover accompanying the production shots telling the world what a lovely time everyone had making the film - typical of that era of filmmaking. The DVD is rounded out with trailers, filmographies and a list of awards. I don't usually worry about commentary tracks, but this is one of those films - from an era long gone - where it would have been nice to hear the director or stars (those who are left) telling their stories about the production - and each other.

Warner Home Video has done a great job in restoring "The Great Race" and this DVD could not look or sound any better. If you're a fan of Blake Edwards' films or just a fan of good old family entertainment then the "The Great Race" is a DVD you must have in your collection.

Trivia Notes:
The credits say that the film was made in Ultra-Panavision - various sources say that this is incorrect as the film was made in 35mm and blown up to 70mm for the initial release. However, in the 'Making of' the cameras seen looks very like 70mm Panavision cameras.
The BBFC has the film certificated on 15/7/65 in 70mm with a running time of 204 minutes - even allowing for the 8½ minutes difference there would be from film to video for this length of film I cannot help wondering where the other 36 minutes are - the DVD contains the Overture, the intermission music and the play out.
Although marked R1 and with an NTSC picture the disc is coded R1, R2 and R7 to my knowledge but it does have an NTSC picture. Rather strange for Warner Brothers.
In the USA the DVD of "The Great Race" came out on the same day as "S.O.B." and "Victor/Victoria". For some unknown reason only "Victor/Victoria" has been released in R2
posted by Tony Myhill on 22/1/2003 13:59
10 / 10

I got when it first came out, and watched it right through three times in the first week. Overall an excellent job, but they did make one small mistake in the audio restoration (stop reading now if you don`t want to know!).


In the opening credits the audience effects starting at 0:04:00 are misplaced on the English sound track, so they boo the hero, cheer the bad guy, and both Tony Curtis and Natalie Wood get a wolf whistle! On this disk you can easily change to the French track while the film is playing so you can hear it the way it should be - it makes a lot more sense then!