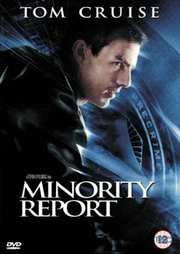 DVD
Catch Me If You Can (UK)

Phillip K. Dick is one of the premier science fiction writers of today, even though he is now lying six feet under. His works are complex looks at mankind, proposing intricate idealogies that question the meaning of life - no doubt because he felt so detached from life itself - due to a number of factors, that he was able to write from whole new perspectives, and these perspectives have been adapted into several films.

One of the most popular is Blade Runner, based on Dick`s story "Do Androids Dream of Electric Sheep?". Numerous factors contribute to this having a massive fanbase (and the cries from DVD consumers for a comprehensive package...so if any Warner Bros. executives are reading, honour them), and Ridley Scott proved that if done right, sci-fi can still entertain, in a big way.

2001 brought a new Dick story to the screen, a story that`s production process was very varied and complicated (Kubrick came up with the idea of the adaptation, then he croaked, but before he did, he passed the idea onto Spielberg who ended up in the chair). That film was entitled AI, and was another complex look at human, and artificial, life. Although not as good as it could have been, some parts were clever and provoking.

And now, another story of his has been born onto celluloid. And again, Spielberg is back behind the camera to bring it to us. Hopes are high of course, but before we get to that, let`s take a look at the plot:

In the year 2054, in Washington, D.C., murder has been eliminated thanks to Precrime, a program that uses the visions of three psychics, called Pre-Cogs (an abbreviation for precognitive thinkers), to arrest and imprison would-be murderers before they have a chance to kill. Tom Cruise plays John Anderton, a Precrime enforcer who believes in the system for his own personal reasons - years back his young son was abducted, and he has dealt with the loss by becoming a high-strung Precrime officer. The director of Precrime (Max von Sydow) is eager to take the program national, and feels threatened by an ambitious federal agent (Colin Farrell) who is bent on finding a flaw in the system. When Anderton finds himself accused of the future murder of a man he`s never met, his faith in Precrime is instantly shaken. He goes on the run, and is trailed by the relentless Precrime police.

It is presented in 2.40:1 Anamorphic Widescreen, and the visuals are crisp and clear, with excellent colour definition and clarity. There are no artefacts visible, and due to a first-class print, we have ourselves a first-class transfer. Period.

Minority Report is shot with ice-cool colours to create a futuristic world full of potential and hope yet a place where evil still stalks - something that Spielberg makes clear. The technology is blatantly advanced, with computers cashing in on the populace`s desire for quicker, more appropriate ways of living, and fortunately the film-makers have made this not a distraction, but more a way of complimenting the narrative.

The set-pieces are well done, with intelligent angles, and the camera is constantly used well to heighten the tension. One of the best examples of this is during the jet-pack scene fairly early on: good direction and choreography.

ILM handle the visual effects, and thankfully they do not - like the way new technology is employed in the film - distract the viewer, making the whole thing a `plastic experience`, in the way Attack of The Clones did. The effects themselves are advanced and detailed, and in a film like this, they need to be.

A choice of DTS and DD 5.1 tracks are on offer, and both use the surrounds well, bursting into life during heightened set-pieces. I went with DTS to begin with, and then checked out the DD track. The former was evidently better, mainly because of better ambience levels and crisper sound, but both are good, and both are crisp and clear throughout.

The script, based on the Dick story, and penned by Scott Frank and Jon Cohen, is involving and intriguing. Not only is the premise original and compelling, but the characters are rounded as much as possible, although of course John Anderton, since he effectively carries the film, is the most developed. The evident pain he suffered when he lost his son is there for all to see, and Cruise handles this with understanding, not only because he is a good actor, but also the dialogue is good. I have never read Dick`s work directly, but from the adaptations I have seen, he is a credit to the world of science fiction.

The music in the film is very atmospheric, with the score bursting to life in many different ways, all adding to the scenes in which they are used. John Williams is in charge, so viewers can expect the usual from him. One of the best uses of the score is during the tense set-piece in which `spiders` are released (mechanical shaped-spiders that seek out heat and then proceed to identify if it is a human or not). The overtones make your skin crawl - excellent!

A two-disc packed crammed with extra features, although they all appear on the second disc - so that means no commentary, yet again, from Spielberg. I think he claims that audio commentaries "Spoil the enjoyment of the film". But of course, Mr. Spielberg...

The main meat of the extras is a collection of featurettes - 17 to be precise - that are sectioned like this:

From Story To Screen - 2 featurettes, the first focusing on "The Story & The Debate", and the second on "The Players". The former is a look at how the story originated and developed, and the second features a look at the actors. Both have interview soundbytes, and both are good, if a little short.

Deconstructing Minority Report - 5 featurettes, focusing on design aspects of the film, such as how the technology was thought up and subsequently built, with emphasis on set design. They are all good, and offer real insight.

Stunts - 3 featurettes looking at how the main set-pieces were achieved, for example the jet-pack sequence. They are good, with enough time spent on each stunt.

ILM & Minority Report - 6 featurettes focusing on the CGI in the film. This is mainly conversations with the ILM gurus, and how Spielberg asked specifically what he wanted, and they had the task of realising his visions. Interesting for CG buffs, interesting for novices.

Final Report: Steven Spielberg & Tom Cruise - to conclude the featurettes is this interview with the two, with their thoughts about the project. Yet again, interesting, and they both come across well in the interviews.

Now we move onto "Archives", a collection of diverse material. It starts with "Production Concepts", a selection of stills for sets and other production-related material.

Then there are three storyboard sequences, which storyboard three of the film`s biggest set-pieces. The usual affair.

There are four trailers - three for the film, and one for the computer game (available on all next-gen consoles by the way).

Cast and crew biographies are also provided, and these are the usual static profiles and CV`s of the main players.

Finally, completing the package, are some static production notes.

The menus are animated brilliantly with varying music in the background and images from the film combined with themed text and menu design. They are OK to navigate, although the text could do with being bigger.

I am not the biggest sci-fi fan, yet Minority Report is incredibly enjoyable due to a number of factors. Not only the story so rich and provocative, but under Spielberg`s watchful eye the project seamlessly comes together to form a believable world and narrative - a film in which you want to see Precrime in action, you want to see the new technology, you want to discover who is behind all of this corruption.

He is backed up by some wonderful supporting actors: Colin Farrell (didn`t realise he was Irish until seeing him in the interviews...his American accent and persona is very good) and Max von Sydow (remember him from The Exorcist?) for instance.

Spielberg directs almost in a Fincher style, using clever camera effects to give away some clues. And some red herrings of course.

Although there is the odd flaw and implausibility contained within, Minority Report thankfully does not descend to cliché ridden hell. It is ambitious, provocative and thrilling, a real blend of action and drama. The whodunit mystery is done well, and the movie does have a sense of humour in some scenes.

The DVD itself is excellent - one of the best transfers around, coupled with good audio. The extras are very comprehensive, and there was a commentary, it would have made the package. As it stands though, this is yet another testament to the fact that 20th Century Fox produce some of the best discs on the market today.

Minority Report is a welcome breath of thrilling air, a movie that will make you think, and make you wonder. Although this isn`t a classic, due to the odd flaw, this still does the most important thing a film can do - make you feel satisfied at the end. Another home run for Spielberg.