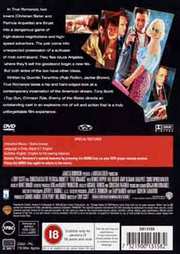 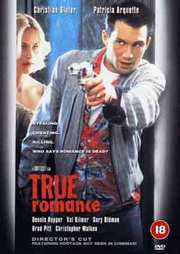 Synopsis:
In `True Romance`, two lovers (Christian Slater and Patricia Arquette) are thrust into a dangerous game of high-stakes negotiations and high-speed adventure. The pair come into unexpected possession of a suitcase of mob contraband. They flee to Los Angeles, where they`ll sell the goods and begin a new life. But both sides of the law have other ideas.

Written by Quentin Tarantino (`Pulp Fiction`, `Jackie Brown`), True Romance takes a hip and hard-edged look at a contemporary incarnation of the American dream. Tony Scott (`Top Gun`, `Crimson Tide, `Enemy Of The State`) directs an outstanding cast in an explosive mix of wit and action that is a truly unforgettable film experience.

True Romance is one of those films I remember from my late teens. I actually saw this film in 1994, after Reservoir Dogs and Pulp Fiction, when I was in my "Tarantino is God" stage. The film is instantly recognisable as his work; even considering it was directed by Tony Scott, and not Mr. Tarantino himself. True Romance is full of slick dialogue, numerous expletives and a hell of a lot of guns. This version is the Director’s Cut with a few of the more violent shots reinserted, and a new twist to the final Mexican standoff sequence.

True Romance is a charming story with some fine performances from its star-studded cast. Christian Slater plays Clarence Worley, a young man who leads an unremarkable life working in a comic book store. Clarence is a big Elvis fan with a penchant for kung-fu movies. It is on one trip to see a Sonny Chiba triple bill that Clarence meets Alabama Whitman (Patricia Arquette), a call girl with a heart of gold. Clarence and Alabama fall madly in love and, on the spur of the moment, decide to get married. Unfortunately, Clarence isn`t the most stable guy in the world and is convinced by Elvis (yes, Elvis!) to pay Alabama`s old pimp, Drexel Spivey (Gary Oldman), a little visit. Well, one thing leads to another and Clarence is left with a couple of dead bodies and a suitcase full of mob cocaine.

The rest of the film follows the couple as they flee to Los Angeles to sell the coke, all the while pursued by mob hit men. The film`s climactic set piece is a Mexican standoff to end all, with some very unexpected results.

Christian Slater is amazing as Clarence; it`s by far his best screen performance (in my limited experience of Slater films). Alabama is played by Patricia Arquette, who, it has to be said, is utterly gorgeous and totally endearing. She manages to bring real sincerity and vulnerability to the role.

The scene between Chris Walken and Dennis Hopper is fantastic. Walken is perfectly cast as the menacing Don Vincenzo, and for once Hopper gets to play something other than a psycho.

This version of the film is believed by many to be the best so far. Featuring a 2.35:1 anamorphic transfer and a Dolby Digital 5.1 soundtrack. It is true that the film looks and sounds great, but there are a couple of minor issues.

Firstly, there is some speculation that the left and right stereo channels are reversed on this disc. After upgrading to Dolby Digital this has become apparent. It doesn`t ruin the soundtrack, and is only noticeable in a couple of instances.

Secondly, the extras on the disc are appalling. In fact, they’re non-existent. I hardly call scene access an "extra", and it’s high time that the studios stopped doing so as well.

On the plus side (and it’s a fairly big plus), the picture quality is excellent throughout. The colours are rich and vibrant, and there are no visible compression problems.

Compared to the R1 and R4 versions, I believe that the R2 version just comes out on top. Some people state that the R4 disc is superior because of the correctly mixed stereo channels, but the sound is only Pro-Logic and the picture quality is supposedly inferior to the R2 disc.

Whatever the technical merits of each release, one thing remains the same; True Romance is an excellent film and a worthy addition to anyone’s DVD collection. The main performances are strong and the list of cameos is very impressive indeed. Seeing as it can be picked up for as little as £12 I would urge everyone who got a kick out of Pulp Fiction to go and buy this film!
posted by Chris Gould on 1/7/2000 02:48
8 / 10

I became interested in this as I am a moderate Tarintino fan and I heard some good reviews. I had seen Reservoir dogs and Pulp Fiction many times so I had certain preconceptions, ie guns, drugs, violence and swearing and I was not dissapointed.

Content: I found this film on a whole, not to be as good as the other 2 films metioned BUT it was still pretty good, after all the other 2 are classics and hard to beat. The acting was good all round (on average) and had some really good scenes. The guns were good and there was a fair bit of violence and blood, especially at the end. There was some drugs in the film, a case full, so thats always fun. To top it all off there was a decent dose of swearing. If you liked the other 2 films then you shouldnt be too dissapointed.

Video: This was a definate high point. The transfer was top of the range and among the best looking in my collection. Lots of colours and crispy bits too adore.

Audio: I cant really judge this as I have only watched it on a mono tv but it is a DD5.1 soundtrack so I assume it will be pretty good for those with the full kit. As far as I could tell, everything was in order and crispy.

Features: Oh there was none. Woops.