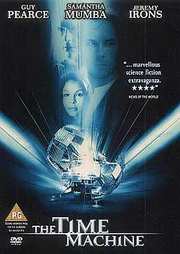 Synopsis:
In this state-of-the-art adaptation of H.G. Wells` science fiction novel, scientist and inventor Alexander Hartdegen (Guy Pierce) is determined to prove that time travel is possible. However, his determination is turned to desperation when his life is struck by a devastating tragedy. Now with the power to travel through time, he sets off on a journey 800,000 years into the future and discovers that mankind has been divided between the hunter and the hunted! Co-starring Jeremy irons, Samantha Mumba and the terrifying Morlocks, The Time Machine is an adventure with its finger on the fast forward button.

What a fun movie! OK, so it`s not as thought provoking and can easily be categorized as a "no brainer", but still - enjoyable.
There`s no real acting in the movie with the exception of Guy Pearce, who`s doing a good job (still, not as half as great a job he did in "Memento").
The video transfer is excellent. There are no compression signs and the picture is very sharp.
The movie relies heavily on its visuals, and the CG scenes of the actual time travel are truly mind blowing.
The DD 5.1 soundtrack is very good. The surrounds are used very well and give a very wide sound envelope.
The menus are still with music.
The extras include 2 commentaries by the director (who`s the great-grandson of H.G. Wells, who wrote the novel over 100 years ago), editor and technical staff, several behind the scenes featurettes, a very good deleted scene (that could`ve easily be included in the movie), a storyboard of the chase scene and a picture gallery.
Bottom line - while the movie itself is not too deep, its presentation on the disc is superb. Have fun!

Gosh, this movie is SO much better the second time around!
I can easily take back some of what I wrote in my previous review - the movie IS thought provoking and calling it a "no brainer" is rather harsh.
Other than the good story, the acting is quite good. OK, so no Oscars are in order, but the characters aren`t flat and all the actors do a good job.
The visuals of the time-travel sequences are breathtaking and WILL blow your mind.
The movie got a 7 for content in my previous review. However, having watched it again, it`s an easy 8.
Bottom line - a fun movie with some wonderful insights, plus a bonus of some incredible visuals. Don`t miss!
posted by Zvi Josef on 6/10/2002 15:48
4 / 10

Oh boy is this one woefully mediocre movie. This is (as I believe) the third big-screen version of the H.G Wells' classic book of the same name. This version is directed by grandson Simon Wells, an obvious case of nepotism because he doesn't seem to have one once of directorial talent in his body. Every shot in this film is standard "How To Make A Blockbuster 101", and while there isn't much wrong with that, it isn't the par standard of excellence.

Guy Pearce does epuip himself well to the role, though he must be bored as the mind-benders of "L.A. Confidential" and "Memento", roles that needed talent to pull off. To be honest it isn't until the second half of the film when Pearce goes 300,000 years into the future does the film become appalling. The near future stuff is quite entertaining with a great, small role from Orlando Jones. But once it kicks in to "Morlock Time", as I call it, the film becomes unbearable. Unbelievable stupid future race (hey mankind is already in this decline), terrible morlock design and Jeremy Irons, who looks like he's auditioning for The Rocky Horror Picture Show.

Video: Another nice DVD transfer as expected from a 2002 film. However this doesn't come close to reference. While there is little dirt or grain, the video exhibits scenes of compression. It simply is sharp or textured enough. Perhaps the video bit-rate was compromised for the extras. And while it may seem like I'm bad-mouthing the transfer, I am not. This is still a very good transfer, just not one of the best.

Audio: A rather disappointing DD5.1 soundtrack. As expected with all new releases dialogue is clear and there is no noise defects in the soundtrack. However where this track fails is probably the film's sound design rather than the DVD itself. Surrounds are simply pathetic. While they are used quite frequently, they are rarely aggressive. You'd thing a giant Morlock running full speed would give some startling sounds. Bass is also hardly dynamic, though it kicks up in the Time Machine activation scenes.

Extras: Maybe it was because the film didn't impress me, but I wasn't impressed by these extras either. Up first are the 2 Audio Commentaries. Now, on the back of the case it says "with the film's creators AND the stars of the 1960 version". This is an obvious typo as no one from the 1960 film on this disc. The commentaries are as follows, "1) Simon Wells and Wayne Wahrman and 2) David Valdez, production designer Oliver Scholl, and SFX Jamie Price. Now, I found these commentaries utterly boring. Why? This is the same old commentary from the same old hacks about some mediocre. These commentaries are basically, "This scene was shot.." "This was CGI" "This was animtronic". Blah, blah, blah. Remember when commentaries were actually reserved for the best of the best? You would never see a mediocre film get a commentary in the laser disc days. But it seems all the rage now.

In the "Documentary" section we find "Creating The Morlocks", "Building The Time Machine", "Visual Effects" and "Stunt Choreography". For one these are not documentaries, they are featurettes and offer very little insight. They are all under 10 minutes and they are the usual PR guff.

Rounding of the disc are trailers, galleries, an extended opening and an animatic.

Overall: For film versions, stick to George Pal version. As for this DVD, good video, under-whelming audio and poor features. The features are particularly disappointing. Everything is streamlined enough though the film's production was not. Gore Verbinski (Mouse Hunt and The Ring) "helping" with the directing. The deleted future destruction scene, which a) is not included on the disc and b) not even discussed. Another case of post 11/9 censorship. How about some insight into the novel or previous versions of the tale. I can't really recommend this disc, unless you find it for cheaper than a rental.
posted by directorscutIMDb on 22/2/2003 12:02
8 / 10