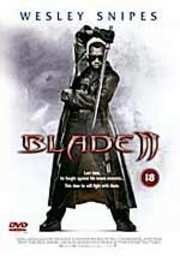 Synopsis:
The blood coursing through Blade`s veins is half-human, half-vampire, the result of a vampire attack on his mother before he was born. Blade has been working with Scud, a brilliant slacker and inventor of devious weapons, to destroy any vampires that cross their paths. The hunt for vampires takes them to the lair of Blade`s sworn enemy - Vampire overlord Damaskinos, who now needs Blade to deal with a far more deadly threat than either has ever faced before. Nyssa Damaskinos`s strong and darkly exotic daughter, and her co-warrior, Asad come to meet Blade to formalise a truce. They will have to work together to stop the Reapers, a Super race of vampires. A mutated form of their vampire predecessors, the Reapers are infiltrating humanity and vampires alike with the reaper strain that will leave thousands of carriers roaming the streets in just a short time. The infected trail leads back to Patient Zero, Jared Nomak and Blade must destroy him before he and the Reapers destroy the human race.

There`s not a lot more story to be discussed and what story there is left unsaid is better left to surprise those who have not seen the picture. Both the original picture and the sequel have a fair amount of differences. The sequel is a little less dark visually as well as a lot more graphic in terms of the violence, too.

The acting is again quite good in the sequel. Going with the overall tone, Snipes remains serious, but there`s also a few more moments of underplayed humor here.

"Blade II" delivers almost continuous action, moves along at a crisp pace, delivers a few surprises and provides the visuals and performances that fans were expecting. "Blade II" is presented by New Line in both Dolby Digital 5.1-EX and DTS 6.1-ES audio. As outstanding as the video quality is on this DVD, the audio quality is equally amazing. This is an extremely aggressive soundtrack, with surrounds that push both music and sound effects with exciting, full-throttle force.

As much as I enjoyed the original "Blade", I felt that the sequel actually managed to slightly surpass the first film in many ways. New Line has produced one of their finest DVD releases so far for this picture - not only does the DVD provide stunning audio/video, but loads of supplements, too. Definitely, at least a must-see DVD release. If blood-soaked, vampire-fanged, wire-fu action is your bag, this film delivers in just about every way you`d possibly want it to. And like the film or not, this is a helluva nice DVD package... exactly what we`ve come to expect from New Line`s Platinum Series.

IMHO this is a must have DVD for action fans, horror aficionados or anyone that wants the latest demo quality DVD to show off what their home theatre system can do.
posted by Aslan on 10/10/2002 06:18
9 / 10

Guillermo Del Toro rightly concentrates on making Blade look cool and fight even better. His new associates the Blood pack may be slightly stereotypical but who cares? This film is all about the action and our loveable anti hero, Blade. This is dark, violent and pacy. A fun film!

The disc includes various fascinating commentaries from the director and stars. It is very honest, funny and informative, and not your usual backslapping. There are various other featurettes, over 20 deleted scenes, trailers and many other things. What are you waiting for? Buy it NOW!
posted by morpheus177 on 16/12/2002 21:13
9 / 10

First off, if you liked Blade, you'll love this. Simply put it's the original, cranked up a notch or two. Wesley Snipes is on great form, storming his way through a way through a whole bunch of vam. Oh no wait a minute, this time he's killing "Reapers" and working with the vampires?!

Either way this is just as stylish as the original, with a lot more action. The action itself comes hard and fast, and is a little more violent and graphic than before. So how does the transfer stand up on DVD? Put it this way… dribble… dribble… dribble. The days and nights are differentiated by amber and blue lighting which comes across beautifully on the disc. And the sound? Oh, sweet mother of god. Ahem, suffice to say it'll do!

The special features are also a bit of a treat. On the first disc (as if the film itself wasn't enough) we get two commentaries. Firstly one with Director del Toro and Producer Peter Frankfurt, the second with Wesley Snipes and the writer David Goyer. We also get an isolated musical score - while it isn't my bag, it's still nice that this was included.

OK… deep breath… and onto disc numero 2. The disc is split into 3 sections - Production Workshop, Deleted and alternative scenes, and Promotional Stuff.

The production workshop has a bunch of goodies, most of which are extremely good. First up there "The Blood Pact" - an 80+ minute making of documentary that is both thorough and interesting throughout. There is also a Visual Effects section with 2 small and one more substantial (50 mins) featurette. A nice touch with these 2 lager documentaries is that they are split up into titles, so that you can either watch the whole thing in its entirety or, pick and choose which bits you want to watch. Good stuff.

Next we have a sequence breakdown of 6 key scenes. For each scene there's the original script, the shooting script, a storyboard, special effects breakdown, as well as the final scene. Again, it's thorough and interesting.

Next, there is a notebooks section featuring static pages of notes from the director and the script supervisor and also, script pages from a couple of unfilmed scenes. There is also an Art Gallery section.

There are 25 minutes of deleted an extended scenes, with an introduction from the director and commentary from both director and writer. They may be seen as "crap" by the del Toro, but they are still worth a look. Again, you get the option of playing them all together or separately. If you are going to watch them with commentary, I would advice playing them all at once, as it was recorded as one long commentary, rather than individually.

Finally, there is the "Promotional" section. There's a game trailer, a teaser and full trailer, a music video, and press pack section that has cast & crew details, as well as production notes. While nothing original, it all adds to the overall package.

It is obvious that a lot of effort has gone into this DVD release, and it has really paid off. The film itself (a few dodgy CGI bits aside) is visually stunning and sounds fantastic. The documentaries are excellent, much better than the usual PR-filled "spotlight on location" or "HBO Making Of". It's filled with nice touched, like splitting up of the documentaries or the directors introductions to various sections. The animated menus are also easy to use, and visually pleasing.

MOVIE
I really liked Blade. I had never read any of the comics but I felt as a film it was highly entertaining, it just got a little lost as The Matrix got released about the same time. So onto Blade 2, and the old saying that everything must get bigger and better is true here. The story is probably not as strong, but the fight scenes are truly stunning, although very CGI heavy in some places. It is just balls to the wall action, and with my view, it works. I`m not sure wether it is actually better than Blade, in their own individual style, theyt work well, but I`d say that the original was slightly better as it had a more captivating story. Luke Goss was a great surpise though, he was incredibly good in his role.

VIDEO
The picture on display here could be decribed in two words, top end. It is an incredibly good picture. My only complaint was I remember Blade being 2.35.1, and the sequel is only 1.85.1. It may be that I just prefer films in 2.35.1, but I don`t think it looks right, Just my preference though. Although it was a low budget and shot mostly in the dark, it holds up well and is very good.

AUDIO
If the video is top end, then so is the audio. There is a choice of DD and DTS, and I think the DTS is 6.1 or something. As you know, I`m not into all the technicalities yet, but it is a mighty soundtrack, even if it isn`t my type of music (I`m a White Stripes fan) Everything is clear and surrounds even on my lowly PC work OK.

EXTRAS
I really don`t know how they fitted so much onto the movie disc. Their are a couple of commentaries, and both are very good. The fun continues over on disc 2. Their is a very comprehensive making of separated into all the different areas, and the director and writer continue to be good value for money on deleted/extended scenes. One of the best sets out there for extras, and for the £10 I paid for it, good value all round.
posted by cartoonjonah on 4/6/2003 22:47