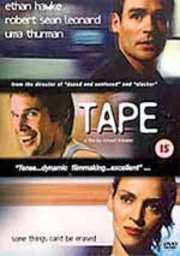 Synopsis:
After 10 years apart, three people come together at a motel to play out the unresolved drama of their final days in high school. Anxious, edgy and fuelled up on drugs and drink, Vince (Ethan Hawke), a volunteer firefighter and dealer from the West Coast paces around his motel room awaiting the arrival of his high school friend John (Robert Sean Leonard) and his ex-girlfriend Amy (Uma Thurman). John is now a movie maker whose film is showing at a local film festival.
Amy is a district attorney who was Vince`s girlfriend before she was lured away by John. There is plenty to talk about... The nature of memory and truth, the binds between old friends and lovers are examined with jagged intensity. Amy arrives at the motel expecting only to see Vince but is stunned to be also facing John, and the past. Steeped in venom, deception and manipulation, Tape is a super-taut and superbly acted thriller written by Stephen Belber and directed by Richard Linklater.

I like the idea of this film - sticking 3 actors in just the one room for the duration a film and have them chatting away. Unfortunately this really does not work as a film - it is just not engrossing enough. I don't think this is the fault of the actors particularly; it is more the fault of the poor script.

While I am generally quite easily pleased when it comes to film, for the first time in a while I can actually say that this film bored me. Recommended only for those who are diehard fans of the actors involved or perhaps fans of the play.