Article
Spread is out on DVD and Blu-ray in May 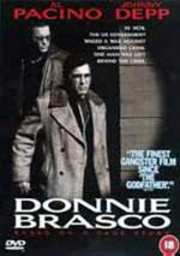 In 1978, the US government waged a war against organized crime. One man was left behind the lines
Certificate: 18
Running Time: 120 mins
Retail Price: £19.99
Release Date:
Content Type: Movie

Synopsis:
This true story follows FBI agent Joe Pistone as he infiltrates the mafia of New York. Befriending Lefty Ruggiero, Pistone (under the name Donnie Brasco) is able to embed himself in a mafia faction lead by Sonny Black. Ruggiero and Pistone become tight as the group goes about collecting money for `the bosses`.
Eventually, the group become big time when Black himself becomes a boss, all the while Pistone collects evidence. However, the trials and tribulations of the undercover work become more than Pistone can bear. His marriage falls apart and to top it off, the mafia suspect a mole in the organization. The real dilemma is afforded to Pistone, who knows if he walks away from the mafia, Ruggiero will be the one punished.

MOVIE
I`m a big fan of Johnny Depp. I think he has been fantastic in all the movies I have seen him in, from Edward Scissorhands, to Sleepy Hollow, just everything. I would have loved to see him take the part of Neo in The Matrix, and he was the Wachowskis preferred choice, and a lot cheaper than Keanu `woah` Reeves. I`m also a big fan of Al Pacino, and was very pleased when he won the Best Actor award in the recent Channel 4 poll. I think he is far better than de Niro, as he has a far better screen presence. Plus he has made a better choice in projects of late. Having said that, the one film where Depp and Pacino worked together, I had never seen, and had only vaguely heard of. I took the opportunity to view it after it came free with the DVD Player.
The story revolves around Depps character, who is an undercover FBI Agent who plays a `Jewel Man` who is the title character. To infiltrate the mob families, he befriends an ageing hit-man, played by Pacino, who trusts Donnie and they soon become friends. As Donnie gets in deeper, he realises he is on a path that will lead to the ultimate clash of consciences. Is he a federal agent, or a friend to Lefty (Pacino)? This movie is very good, pretty much all there is to say. The quotes that are littered on the awful EiV box are true. This is one of the best gangster movies since The Godfather, but it is more than a gangster movie. Having said that, it plays on the gangster cliches slightly, but uses them to great effect, to break up the dramatic moments with some true comedic touches that are sprinkled throughout the sparkling script. Although the cinematography is not a patch on The Godfather, it is very good, with some nice camera moves. The casting is excellent, and nobody could have been Lefty other than Pacino. This is also one of Depps finest moments.

VIDEO
This is a decent transfer. It`s 2.35.1, and is free from dust and scratches. It`s ot as sharp as it could be, but it is pretty damn good all the same.

AUDIO
Being an EiV release, and an early DVD release at that, there was always going to be something wrong, and the audio is it. The first US release had a decent DD 5.1 track on it according to stats on this site, but it was dropped by EiV for the UK release. Very odd. It is however, a very clear 2.0 Stereo track that appears on the disc, and much of the movie is dialogue driven. The 5.1 would probably have handled the noises of the city that the 2.0 one can`t quite do though.

EXTRAS
A bit of a letdown really. A statc ugly menu gives us the theatrical trailer and then a 5 minute making of, which isn`t really that much in depth. No subtitles either, so a bit of a no show. It is better than the first US release, but is nowhere near as good as the R2 re-release, which featured more indepth featurettes and the all important commentary from Brit director Mike Newell.

OVERALL
A very good film, but let down by lack of extras. A re-release would be nice, but it is unlikely from this company.
posted by cartoonjonah on 8/6/2003 23:24