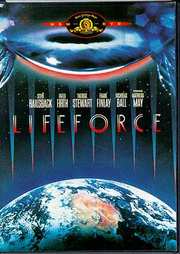 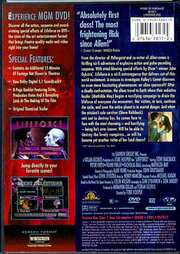 Back Cover of Lifeforce

I first saw this movie on it’s theatrical release way back in 1985. I remember it vividly because it was the first cert 18 movie that I got in to see (I was only 15 at the time so this was one of lifes milestones I suppose). I remember enjoying it immensely at the time so when I first got a DVD player it was one of the first discs I bought. On reading Robs review I simply had to have my say :). The plot is involves a mission to Haleys Comet discovering space vampires who feed on the lifeforce of humans. These creatures make it back to Earth and the usual havoc ensues. Ok, so there is allot more to the story but that kind of sums it up very basically. So, on to the DVD itself. 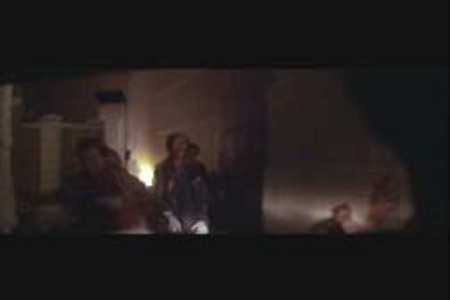 Considering the age of this movie the image quality isn’t too bad. It is grainy in places but it still remains as the best picture quality you are likely to see on any version of this movie. It would benefit hugely from a remastering however I struggle to think of any older movie that wouldn’t benefit from the same process.

The actual visuals of the movie are very well done. The effects of the drained victims hold up well even by todays very high standards. Yes the lead space vampire just happens to be an extremely attractive young woman who just so happens to spend most of the film stark bollock naked, very pleasing visuals indeed :). 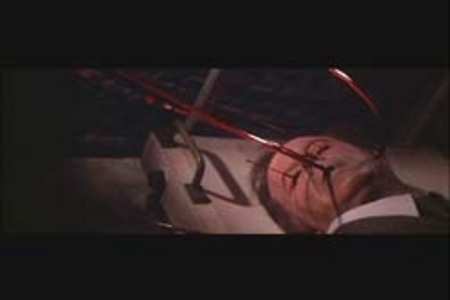 The disc comes with a dolby digital 5.1 soundtrack that, whilst doing the job, isn’t very memorable. Allot of the creature effects and sounds are quite eerie, in-keeping with the visuals nicely.

The soundtrack is one of my favourites. It isn’t what you would expect from a sci-fi movie but is, nonetheless, very catchy and has stuck in my head somewhat. 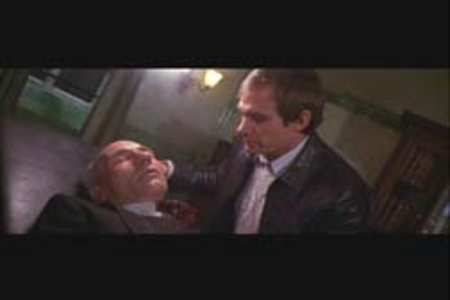 Being one of the earliest DVD releases it is a surprise to find an animated menu. You can see that this was one of the earliest discs, however, due to the fact that they have included a small booklet inside the front cover (on discs today this would all be on screen of course). The disc also boasts an extra 15 minutes footage that wasn’t in the original theatrical release, exactly what that footage was I couldn’t say as I last saw this at the cinema 15 years ago :P. 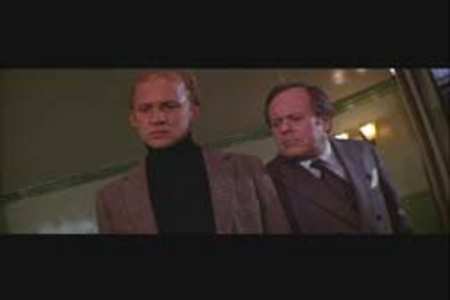 Well, no surprise to see that I am in total disagreement with Robs review :). Yes the movie is a bit cheesy in places, being set in the UK doesn’t help matters as it is almost a reflex action to compare it with Dr.Who and immediately give it ‘B’ movie status. In my opinion it’s not a reflection on the quality of the movie, had it been set in America then it would have had far more credibility. Overall I like this film allot, but the acting . . . oh dear :(.

The lead characters are . . . passable but easily forgettable, as is most the rest of the cast. Of note is the main British agent, Colonel Colin Caine. He is typically British with a stiff upper lip etc and is noteable for making me laugh, pomposity in the extreme :). The female space vampire is gorgeous, whether she can act I do not know as she simply has to wander about naked for most of the movie. Look out for an early role for Patrick Stewart (aka Captain Jean Luc Picard from Star Trek: The Next Generation).

So, I don’t care much for the acting . . . but I love the story. The idea of space vampires feeding on the life force of people to stay alive is interesting, as is the idea that this condition passes on to the victims as well and spreads like a plague. Once fed the affected victims appear normal making for some nice “trust no one” scenes as well. The decline of the city of London is well done and shows that there was no lack of vision or scope on the part of the film makers.

Considering the age of the movie it is a good quality disc. Yes it comes across as cheesy (mainly due to the decision to base it in the UK) and yes the acting is decidedly dodgy. Even bearing these points in mind I still found the whole thing very entertaining and a good little sci-fi yarn. Ok so it holds a place in my memories as my first ever 18 cert film that I saw at the cinema but it is worth a look if you are interested in this genre.