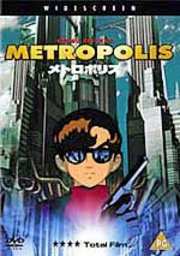 Fritz Lang`s Metropolis gave us one of the most memorable cinematic images there is, one that still resonates almost 80 years after the film was made. It was a film that for a brief instant opened up the possibilities of what could be done with the medium. Metropolis changed everything, and still influences filmmakers today. It`s no surprise that the iconic imagery of Metropolis had an effect on one of Japan`s pioneering manga artists and filmmakers, Osamu Tezuka (Astro Boy), and he created his vision of Metropolis in the late 1940s. What is surprising is that it took 40 years before it was even considered for the big screen anime treatment, and it was a further 10 years following Tezuka`s death that his Metropolis finally made it to the screen. Although certain imagery may be strikingly familiar, the story is original, with a screenplay penned by Akira`s Katsuhiro Otomo and Rintaro directs the film.

Shinsaku Ban is a private detective from Japan, visiting the city of Metropolis with his nephew Kenichi on a case. He`s trying to find a Dr Laughton, but has wandered into the city amid grand celebrations for the completion of the city`s new Ziggurat, marking the dawning of a new age for mankind. But tensions beneath the surface of this society are about to erupt. Robot labour has created a dispossessed underclass, and factions have formed to attack the robots and take control. Meanwhile, the ruling class are ready to use this for their own ends, and Duke Red wants to wrest control of the city away from the President. However, his plans extend far beyond the city, and the Ziggurat is far more than merely an edifice to mankind`s hubris. Key in his plans is a robot that he is having Laughton create, in the image of his own dead daughter. Red hasn`t figured his own adopted son Rock into the equation though. Rock despises robots and believes that Laughton has deceived his father. He attacks Laughton and destroys the lab where the robot Tima is being created. Which is when Shinsaku and Kenichi stumble on the scene. The two get separated and Kenichi discovers the newly activated Tima. Fleeing with her into the city`s underworld, the two begin to form a friendship, but they remain in danger from Rock. A bigger danger remains hidden however, because Tima believes that she is human. If she discovers her true nature, the ramifications for Metropolis could be disastrous.

Metropolis gets a 1.85:1 anamorphic transfer. The image is clear and sharp throughout, although there is a smidgen of grain, and moiré does show up on extremely fine detail. Some of the darker scenes were a tad lacking in clarity, but hardly enough to warrant complaint. Metropolis takes its cue from the Fritz Lang film in some respects, with the iconic throne scene from the poster mirrored here. This Metropolis is also a multi-layered city, with grand zeppelins finding room to manoeuvre amidst the art deco style architecture.

For those who are familiar with the svelte and stylised anime characters in most Japanese animations, the 50-year-old character designs of Metropolis will come as quite a shock. These characters have more in common with European comic designs, such as those found in Tintin or Asterix graphic novels. The faces are often caricatured, the bodies are short and stocky, and the way they move is markedly different. This being a recent animation, it`s unsurprising to see that 2D animation has been deftly combined with 3D CGI, and with only a few exceptions, the melding is seamless. There is a charming cluttered feel to the animation, every scene has a couple of dozen things going on at any one time, and there are visual treats in every corner of the frame. The editing takes its cue from films of yesteryear in much of the same way that Star Wars does, and seeing the various cuts, wipes and dissolves between scenes also gives a retro feel to the film, despite the technical achievement.

You get a choice between DD 5.1 English and Japanese, as well as a DTS English track. As usual I chose the original language track and found it to be an excellent surround track, making full use of the soundstage to convey the feel of the futuristic city, the effects, the music and the dialogue. The English dub is acceptable, with the actors suiting their characters. The music is quite special; the film`s themes follow a jazz soundtrack of the `20s or `30s, while the dramatic score also harks back to the serial dramas of the period like Flash Gordon or Buck Rogers. It very much gives the film a singular feel that complements the visual style perfectly. There are subtitles in Dutch and Hindi, but in an odd move there are three English subtitle tracks. There is a subtitle track for the English dub, and there is a translated subtitle track for the Japanese soundtrack, although in an error, the two tracks are mixed up on the subtitle selection screen. The third one is a HOH English caption track. Most confusing of all is that neither this nor the English dub subtitle track actually match the English dub, although they are closer than the translated track.

Disc 1 as well as containing the film, also houses the film`s trailer, as well as trailers for Final Fantasy: The Spirits Within and Roughnecks: Starship Troopers.

Disc 2 houses the bulk of the extras, beginning with a photo gallery, which is nothing of the sort. It actually presents a series of line sketches of the film`s characters, although a little colour is added for the Art Direction sub section.

Animation Comparisons is one of those multi-angle gubbins that presents a couple of scenes from the film in various states of completion to compare. Wheel Room lasts 30 seconds and offers 9 views of the scene, while City View is slightly shorter and offers 6 views. The trouble is that the scenes are too short and aren`t looped, so by the time you actually get round to switching the angle, the clip has finished.

There are text filmographies for the Director Rintaro and Metropolis Creator, Osamu Tezuka, and there is also a similar presentation about the history of the story, from manga to movie.

Filmmaker Interviews lasts 8 minutes and features Rintaro talking about the film, and realising the story with modern animation techniques, as well as how he believes that Tezuka would have reacted to the film. Then Katsuhiro Otomo adds some insight into writing the screenplay for the film.

The most substantial addition to the extras is the Animax Special: The Making Of Metropolis, which lasts 34 minutes. It`s very much your PR puff piece, with interviews with the cast and crew, and a little repetition from the Interviews. There is plenty of footage of animators with furrowed brows slaving over hot pencils, as well as input from the music composer, insight into the dubbing process, and it concludes with the world premiere.

Mention animated features from Japan, and the same names spring to mind again and again, Akira, Ghost In The Shell, and Spirited Away. Metropolis on the other hand is a film that is rarely recalled, and I admit that when it comes to anime it is one title that even I forget I own. Perhaps it is because it gets compared to Fritz Lang`s film of the same name and suffers in comparison. If so, it would be a damned shame, as the Metropolis anime is one of the finest films made in that medium, telling a compelling story set in a beautifully designed future world, and featuring characters that truly engage the viewer`s emotions. This is a film that wouldn`t be out of place on any DVD shelf.

Katsuhiro Otomo`s script develops Metropolis as a city of many levels and stressed to the breaking point because of it. It`s a familiar tale of progress causing disenfranchisement, with robots accused of taking the jobs away from people, and the resentment that builds up because of it. While the power struggle at the top end of the social strata has nothing to do with this, the players aren`t above using this resentment for their own ends. The detective Shinsaku Ban and his nephew Kenichi are our guides through this complex society, as they pursue the case that has brought them to Metropolis. The case they are investigating leads them to the heart of the conspiracy that Duke Red concocts. Duke Red`s plans for world domination involve the Ziggurat and a special robot that he is having constructed. Yet this is no simple megalomaniac, and his motives regarding the robot are unclear, especially as he is having her constructed in the image of his dead daughter. Then there is his adopted son Rock, who idolises the Duke and wants to see him succeed. Yet his own hatred for robots becomes tangled up in some sort of twisted jealousy when he finally sees Tima. It pushes him over the edge into his psychopathic pursuit of the robot. Tima is rescued by Kenichi, who then goes on the run with her. Initially a blank slate, she soon forms a friendship with Kenichi that is doomed to tragedy, as she doesn`t even understand her true nature. The film`s climax is tragic, and all the more moving because we have gotten to know the characters and can empathise with them.

A provocative story coupled with shaded and complex characters lie at the heart of this film. When put together with the stunning world design and memorable visuals, as well as the deliciously retro soundtrack, the resulting movie is special indeed. Science Fiction with heart is a rare combination, but Metropolis has the best of both worlds. It`s presented immaculately on this disc, and the extra features are a rare bonus with any anime. It`s a film that deserves to be seen. Make the time for Metropolis.