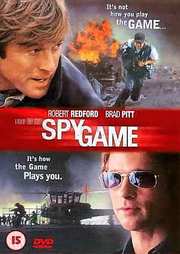 Synopsis:
There was a time when CIA operative Nathan Muir (Redford) and his protégé Tom Bishop (Pitt) were inseparable, traveling the world and tasting everything it had to offer … from Vietnam to Berlin to Beirut. In a profession fraught with danger and uncertainty, Muir and Bishop forged an uncommonly close friendship based on mutual respect and affection. But that was years ago. Now, on the brink of his retirement from the agency, Muir learns that Bishop has gone rogue. His one-time protégé has been jailed in Beijing on espionage charges after attempting to break a prisoner out of China. Years of bad blood and hurt feelings are washed away in a flood of memories of adventures shared by the two men as Muir takes on his most dangerous - and personal - mission ever.

I was pleasantly surprised by this move, not being a great fan of Redford (apart from THE STING) or Pitt.

The director makes extensive use of flashback to explain how the Redford character, who is about to retire, meets up with Tom Bishop, played by Brad Pitt.

There is nothing original about spy/cop/whatever, who initially fails to get on terribly well with his boss/underling/sidekick/whatever, but in this case, the trusted theme is well used, and we have a well paced movie, with a beginning , middle, and an end.

Some would say that there are too many scenes where Redford is sat around the table with a group of colleagues he clearly does not trust, but this is balanced by actions scenes set in places as far aopart as London, Beirut, a Chinese prison, and Berlin.

My first impressions was negative I spose this was because of the high profile actors. For Two hours it has a descent storyline and twist. One of the best films I have seen Brad Pitt in for quite a while whilst rob redford is ageing with style in his films.
I recommend this film to a mature audience and who like long thriller films.
posted by D.stent on 26/7/2002 15:53
8 / 10

When this film first came out I was over joyed that they had released a film that put Robert Redford back on form. You see I`m a huge fan his previous work with Butch Cassidy and the Sundance kid being one of my favorite films ever, but lately he has become a bit of a movie snob. Nowadays he only likes to make the kind of films he enjoys, like The horse whisperer, fortunately these require money which he gets by making the occasional mainstream movie like this one. This one being so good because whereas lately he has been directing more than acting, this time he is just an actor, and when Robert Redford acts he acts very well. This however brings with it a major problem. You see as good an actor as Redford is, he is getting old now and as a result the younger generation can not really relate with him. The solution required getting an actor who was capable of acting next to Redford, but was still young enough for the audience. We already know that the only choice could have been Brad Pitt, a man who has many times been considered a young Robert Redford. Like Redford, Pitt is a terrific actor who finds people don`t take him seriously because they think that he`s just another pretty face, and from what the director says, Pitt`s casting was the only reason that Redford accepted his role.
With both Pitt and Redford on board then, this film was destined for greatness but it must be stated that this is not your typical action blockbuster. It may be a spy movie but it will never be mistaken for Mission impossible 3 or the next Bond movie. Spy game offers us a realistic insight into the world of a spy. This is not a world of adventure and beautiful women, but rather a world where difficult decision`s must be made for the greater good. Like the trailer puts it, `it`s not how you play the game, it`s how the game plays you.` Yes these characters can not control matters in the same way as Bond. They cannot achieve the perfect outcome, and must sometimes make the wrong choice for the greater good. It`s not the typical rose tinted view of the world that hollywood usually offers and is all the more better for it.

This film has a really well written story that goes something like this. It opens with agent Tom Bishop (Brad Pitt) breaking into a chinese prison to rescue a prisoner. Unfortunately this goes wrong and he finds himself captured, and sentenced to death. The government, who had no idea about the operation, decide that diplomatically it`s best to just let him die, but first they decide to question his best friend and mentor Nathan Muir (Robert Redford) to try and find out what he was doing. Nathan then explains about how he met Tom, and talks them through how he trained him, all the while going behind their backs and making plans.

Overall then, you should not expect James Bond. It`s a character led film with an intelligent story that forces you to question whether or not the things that we take for granted are worth the sacrifices that have to be made. A very enjoyable film.


An average disk. There`s a commentary on the main film, and some decent deleted scenes that also have a commentary. It always makes deleted scenes better to have a commentary because then you can understand how they would have fit into the film and also why they were cut. Other than that we just have a bunch of 2 minute featurettes that explain about casting and stuff. Most of them are of no real interest, and spoil the disk.


Even when a hand held camera is used to give a shaky realistic look the film still retains an amazingly clean picture quality.


The 5.1 surround sound works to enhance the quality of the already realistic action scenes involving you even more, and it comes through crisp and clear.


A really good film that despite an average disk still comes highly recommended.
posted by moviebuff on 31/10/2002 01:27