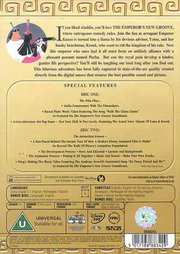 DVD
Emperor`s New Groove, The (US) 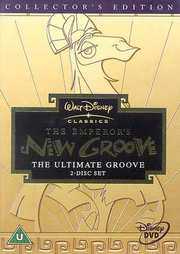 Synopsis:
Outrageous comedy reigns supreme in a mythical kingdom when arrogant young Emperor Kuzco is transformed into a llama by his power-hungry advisor, the devious diva Yzma. Stranded in the jungle, Kuzco`s only chance to get back home and reclaim the high life rests with a good-hearted peasant named Pacha. Kuzco`s perfect world becomes a perfect mess as this most unlikely duo must deal with hair-raising dangers, wild comic predicaments, and - most horrifying of all - each other as they race to return Kuzco to the throne before Yzma tracks them down and finishes him off.
Ultimately, Kuzco`s budding friendship with Pacha teaches this royal pain to see his world in a different way. With its distinctive flavor, upbeat music by Grammy Award-winning singer/songwriter Sting, and stylish animation, The Emperor`s New Groove is sure to get moviegoers in the groove for fun, fantasy, and adventure.

Disc Two:
The Animation Groove - a fast-paced behind-the-scenes tour of how a modern Disney animated film is made ! Go beyond the walls of Disney`s Animation department.
The Development Process
Story And Editorial
Layouts and Backgrounds
The Animation Process
Putting It All Together
Music and Sound - Make your own tracks
Sting`s making the music video `My Funny Friend And Me`

I enjoyed the single disk version of this movie so much (see my review at: http://www.dvd.reviewer.co.uk/reviews/comments.asp?DiscIndex=1372 ) that I just had to buy the 2-disk set the minute it was published. And boy, I just love this 2-disk set.
I think Disney did a major mistake when they did not give this movie an appropriate publishing campaign. It`s hilarious, beautifully presented, sounds great and can be enjoyed by both kids and adults (on different levels, that is).
The video transfer is excellent. The CG is so seamless that you can actually be led to think there is no CG in the movie. Far from it - there`s heaps of it. The characters are all beautifully animated and you will love each and every one of them. Guaranteed.
The DD 5.1 soundtrack (the original English one and the additional Norwegian and Danish ones as well) are just great. The characters are all beautifully and effectively dubbed and it`s quite amazing just how much of the dubbers` human character is embedded into the actually character in the movie.
The menus are beautifully animated with sound.
The extras include a commentary by members of the crew, an extremely extensive behind the scenes look, 3 deleted scenes, 2 music videos, an interactive question game, very good explanations about the animation process, several storyboards, a multiple angles feature, a picture gallery and an interactive effects mix feature. The extras are, in a word - superb.
Bottom line - this movie is one to own. It`s funny beyond belief and is beautifully presented in an excellent 2-disk set.
posted by Zvi Josef on 15/4/2002 04:24
9 / 10

This is a fantastic film for both kids and adults. And this ultimate edition is also filled to the brim with extras. I’m not even going to bother explaining the film, suffice to say if you have a sense of humour – watch this film!

The video and audio quality are both excellent. The film itself is only a very short 75 minutes, but it’s 75 minutes worth of pure laughs. While I would have loved this film to have been longer, it would probably have spoilt it – so, if it ain’t broke – don’t fix it! The menus are OK, but I did find them slightly difficult to navigate. And now to the extras…..

OK, there an awful lot of extras. And to be honest, I probably haven’t even watched half of them yet (yes, there are that many!). On the first disc we get an audio commentary (I ‘sampled’ it and it seems informal and quite funny), an interactive trivia game type thing, and a 2 music videos. The Walk The Llama Llama video is obviously aimed at kids, but I found it absolutely hilarious, but then I have a very juvenile sense of humour!

The second disc is pure extras, and this is where the menus become a little annoying, as it is quite difficult to access one particular feature if you don’t know where it is. Having said that this is my only gripe. The extras are split up as follows – Get In The Groove featurettes (Studio and Animation Grooves), Extended Sections of Development, Story and Editorial, Layouts and Backgrounds, Animation Process, Putting It All Together, Music & Sound, and Publicity (all the promo stuff). Oh and there’s a Sting music video as well. To go through all of these will take days rather than hours, so I’ll just say from what I’ve seen, these extras are great – if a little daunting to get through!