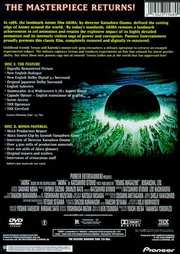 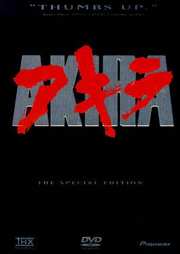 Synopsis:
In 1988, the landmark Anime film Akira, by director Katsuhiro Otomo, defined the cutting edge of Anime around the world. By today`s standards, Akira remains a landmark achievement in cel animation and retains the explosive impact of its highly detailed animation and its intensely violent saga of power and corruption. Pioneer Entertainment proudly presents this classic film, completely restored and digitally re-mastered.

Childhood friends Tetsuo and Kaneda`s motorcycle gang encounters a military operation to retrieve an escaped experimental subject. The military captures Tetsuo and conducts experiments on him that unleash his latent psychic ability, but when these new powers rage out of control, Tetsuo lashes out at the world that has oppressed him!

"Akira" was a landmark in animation. A milestone that made history in America and redefined the genre; and animation films in general. For an audience that has only ever seen Disney and Saturday morning cartoons its mature theme, epic animation, futuristic world, action and violence made "Akira" into first adult animated feature (apart from porn) that the vast majority of Americans had ever seen. `Heavy Metal` and `Lord of the Rings` only became popular after their video release. Since the start of DVD, fans have been hoping to see a DVD version of the film - now Pioneer Entertainment has released it. It was well worth the wait, restored and remastered, the film has come in two versions. A DVD that features only the movie itself, and a 2-disc limited Special Edition, offering the film, along with a number of very exciting supplements.

Tetsuo and Kaneda are childhood friends and with their motorcycle gang they stumble across a military operation that is trying to locate and retrieve an escaped science experiment. After he is injured the military take Tetsuo to a hospital - they conduct experiments on him that open his mind, to the point that he can suddenly use psychic powers to manipulate and destroy others. When Tetsuo realizes the power that lurks within him, he has increasing difficulties controlling these powers - and before long they flare up uncontrollably as Tetsuo lashes out at the world that oppressed him.

"Akira" is an easily approachable film but if you plan to use this movie as an entrance into the Japanese animation genre, be forewarned that the style, story, characters and music are more akin to a well made live action film that an animated feature.
Combined with the breathtaking animation and the incredibly detailed backgrounds, "Akira" is well deservedly hailed as a landmark. The first disc of the set contains a newly restored anamorphic widescreen transfer of the film in its original 1.78:1 aspect ratio. THX-certified and remastered, the transfer unfortunately has many blemishes and speckles despite the pre-publicity of how much time was spent cleaning up the old master. The transfer is, however, clear and reveals a staggering amount of detail despite the fact that some light grain is evident on occasion. The colours are powerfully rendered, bringing out the best of the backgrounds and the gigantic sprawls, although pure reds appear somewhat over saturated due to the nature of the NTSC Region 1 playback. Blacks are absolutely solid and deep, giving the image good visual depth and shadows are always finely delineated, even in the murky urban scenes where directional light is used to basically shadow-out certain parts of the screen. Generally no edge-enhancement is evident in the transfer, but there are a handful of shots were it has sneaked into the transfer, creating visible ringing artefacts. But for the rest, the animation is just as it was originally designed with pencil strokes that are sometimes contrasted, or finely graded at others. The compression is also flawless and no hint of compression artifacting is visible - no question a result of the extremely high bit rate utilized with this video presentation.

The film comes with the original Japanese Dolby Surround audio track as well as a newly remixed 5.1 channel Dolby Digital audio track in English. For completely unexplained reasons the original Japanese language track has not been treated to the 5.1 remix of the new English track so although good the presentation is not nearly as refined as the new Dolby Digital mix and more importantly sounds slightly harsh, clearly dating the film to the 80s. Although I am typically not a fan of dubs, in this case, the English track is definitely worth a try. It may also be interesting for you to know that a completely new dub of the movie has been created for this release. With a wide dynamic range, it puts some serious power behind the pictures, as the thunderous soundtrack, vast explosions, frenetic motorcycle races and the film`s other action elements make their appearance. At the same time the frequency response is immaculate. The bass response is very good with an extension that goes very low. The high ends are always clear and pleasant, never creating a harsh or shrill presentation. Overall, the new soundtrack for "Akira" shows what can be done when the production company cares.

On the second disc, the Special Edition of "Akira" contains a number of interesting supplements, such as the "Akira Production Report." It is a documentary from the 1988 video release taking you behind the scenes of the film`s production, but also explains some of the film`s background and characters. It takes you inside the "Akira" animation studios and allows viewers to look over the shoulders of the artists as they work on the film. Voice recording and the music are touched upon in the documentary making it a well rounded. "Akira Sound Clip" is a 20-minute featurette on the making of the soundtrack for the film. Also full of behind-the-scenes footage, it offers a good look into the making of this important part of the film and how scoring it was approached. Since most of the featurette is made up of clips from the film, it is more on the promotional side, but nonetheless interesting and full of information particularly about the instrumentation and the voices used.
An interview with director Katsushiro Otomo is also part of the release. Like most other features on the release, it is in Japanese with English subtitles. Otomo talks extensively about the origins of "Akira" both as the manga book and eventually as an animated feature film. The interview is full of valuable information that especially fans of the film and Japanese animation in general will love.

An image gallery with over 4,500 images is also part of the release, and the majority of these images are made up by the original storyboards from the film. But also pre-production art, concept sketches, production art, unused backgrounds, character designs, comic book covers, posters and countless other images can be found. Four trailers and a TV Spot can be found in another section on this disc. All of them are in Japanese and presented in widescreen.

If you want to learn more about the resurrection of "Akira" for this DVD, three featurettes take you behind the scenes of the film`s restoration. In interviews it is revealed how the video transfer has been created from a new interpositive, converted into a high definition master. Some may find it surprisingly technical, but at the same time it gives a look at the procedures involved and hence gives viewers a good idea what the steps are to bring a film to DVD. Another interview featurette focuses on the newly created English dub while the third one examines how the film`s soundtrack has been remixed to a 5.1 multi-channel presentation for the English track (why this was not used with the Japanese track is a mystery). It is a rare glimpse behind the scenes that shows how these projects are approached and hopefully helps to give people an idea of the scope of the remastering processes.
posted by Tony Myhill on 8/4/2002 02:21