DVD
Have I Got News For You: Very Best Of (UK)

DVD
Have I Got News For You: Best Of The Guest Presenters (two disc set) (UK) 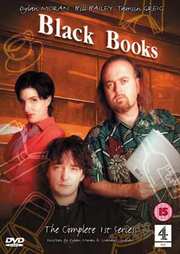 Synopsis:
Dylan Moran and Bill Bailey star in this fantastic sitcom from the writer of Father Ted.

I missed this series when it was TV, so after hearing good things, I decided it was worth a rent… you know, just to watch a couple of the episodes.. 2 and a bit hours/6 episodes/1 series later - and I am a very happy man.

This is a wonderful series - well written and there is a great chemistry between the 3 main stars. The disc itself is pretty good. We get a nice anamorphic transfer which makes such a nice change from other poor TV to DVD transfers (cough - friends!!! - splutter, cough!), the sound (DD 2.0) while nothing spectacular, is fine for this dialog driven sitcom, and we even get a bit of a treat extras wise.

There is a trailer, 10 minutes of outtakes and some photos (a mixture of production and 'official show' stills). These are all well and good, but the real treat is the commentary on all the episodes from the 3 main stars. Mostly completely irrelevant to the show, but always amusing - this is well worth a listen. Also, the commentary really benefits from the fact that Dylan Moran co-wrote the script as well as acting in it. The menus are also well designed and easy to navigate, making this a very well rounded disc.

SERIES
This series is just incredibly madcap. It is in the vein of Blackadder mostly, but is probably just a little bit crazier. All the episodes are very very good, as they should be, being written by the creators of Father Ted (note, Black Books is nowhere near as good as this program). The episodes can really be watched in any order, except for the first, which introduces the characters. The best episodes are The Grapes of Wrath and Coffe and Cops, they are just brilliant highlights of a great series, full of great characters, with Bill Baileys Manny and Dylan Morans Bernard Black working so well off each other. Tamsin Greigs character is nowhere near as funny, mainly because the script isn`t as strong for her character. The background characters are good though, such as the Thecurity Guard and The `Dirty` Cleaner. From the problems with tax returns, to the beard pornographer (you`re sold now aren`t you), a joy of a series. One word of warning, it appears it is a love or hate show, as all of my family hate it, except me of course.

VIDEO
For a TV series, this is brilliant. A nice widescreen transfer, which, thankfully is now more and more common in TV. Obviously, because of the studio setting the colours are slightly bright and can look false, but the transfer itself is fine and looks a lot better than it could on TV.

AUDIO
Stereo only, but it really didn;t require anything else did it. Everything is very clear and can be heard perfectly, even the slightly boring and unimaginative theme tune (well, it`s not as good as Father Ted)

EXTRAS
A nice set of extras, it has a commentary that runs through the whole series, with the cast. They clearly had fun making the series, and the commentary by the sounds of it, and while it can turn into a bit of a laughing session sometimes, it`s nice for it to be included. Also on the disc is a rather slapdash trailer for series 2, which wasn`t as good I don`t think, except fot the piano episode, some photos taken on set, and then a wonderful outakes section. Bernards talk to Jimmy about the old country and Bill Baileys wondeful bookshop song are just brilliant.
posted by cartoonjonah on 5/6/2003 16:07