Review of Shocker
added by
Anil Khedun
Places to Buy 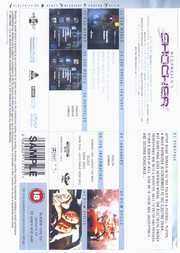 Back Cover of Shocker 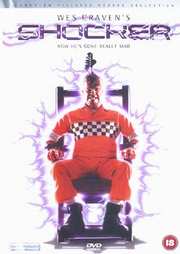 Synopsis:
A mass murderer goes to the electric chair... but something goes horribly wrong.

The electrical energy transforms him into a monster, able to enter and possess other`s bodies at will. Now he is loose and unstoppable...

Nostalgia is a great thing, it allows us to fondly remember things that are, by today's standards, a load of old rubbish. Does Shocker fall into that category? I wouldn't recommend this to anyone unfamiliar with the film, but if you enjoyed the film on its release then this may be a nice little trip down memory lane. All in all it`s a film to avoid buying.
posted by Aslan on 18/4/2002 16:16
4 / 10

Shocker is, at first glance, very similar to A Nightmare On Elm Street, in that it is based around the exploits of a vicious serial killer. The killer has murdered dozens of people and the police are no closer to tracking him down. All this changes when Jonathon Parker, local football superstar and adopted son of police Lt. Don Parker, sees the killer in his dreams. Jonathon leads his somewhat sceptical old man to the killer's lair (in typical horror film style they go with only minimal backup!), but unfortunately for them the killer escapes, slaughtering a few cops along the way before moving on to Jonathon's foster mother, sister and girlfriend!

Once again Jonathon is able to use his dream power to discover where the killer will strike next, and he and his father manage to capture the murderous so-an-so, who turns out to be local TV repair man Horace Pinker. Pinker is sentenced to the electric chair, but this madman isn't about to go quietly. Using his knowledge of the occult, Pinker is able to cast some kind of voodoo spell that ensures he lives on after his death. During the electrocution Pinker is able to possess the body of one of the spectators and escape, wreaking destruction in his wake. Pinker then goes about exacting his revenge on Jonathan, using the possessed bodies of innocents to move around. Of course, no one believes Jonathon's story of a serial killer from beyond the grave, and when the killings start to happen all over again Jonathon is the chief suspect. Not even his own foster father believes his tales, so it is left to Jonathan to try and stop Pinker alone.

The main difference between this and the Elm Street series is that the killer can get to you at any time, whether you're awake or asleep. Dreams do play an important part in the proceedings though, with Jonathon's being the key to Pinker's eventual defeat. The story is fairly involving, if a little convoluted at times, and the acting is reasonably good throughout. Mitch Pileggi is the star of the show with his amazing turn as Horace Pinker. He comes across as a real nut case, which is a bonus for a guy playing a mass-murdering psychopath. Peter Berg is also good as Jonathon Parker, although he suffers from a lack of real screen presence. If you look very closely you may be able to spot Heather Langenkamp (Nancy in A Nightmare On Elm Street) in a small cameo role.

As with the R2 release of Reservoir Dogs, Momentum have done a fantastic job with the video. For such a low-key release you might have expected them to release a product with a very poor transfer. This is not the case with Shocker. The 1.85:1 anamorphic video is excellent throughout and it is clear that a significant amount of restoration must have taken place prior to the disc's release. With a film of this age you would expect the print to be covered in scratches and full of grain, but this could not be further from the truth. The picture is very clean, with rich, vibrant colours and excellent definition. Sure it has some issues, but this is a great job overall and this is reflected in the scoring.

Plain old stereo here I'm afraid. Not really a lot I can say, apart from that it sounds fine for what it is. Dialogue is always clear, but for some strange reason the German language track has slightly more punch than the original English track! Shocker features a soundtrack by some of the biggest heavy metal artists of the day, most notably Megadeth. They actually wrote the theme song to this movie, but more of that later. This film would really have benefited from a remastered soundtrack and it's a real pity that this was not done. A similar thing happened with Reservoir Dogs as I recall.

A small, fairly uninspiring collection of bonus material is included, the best of which is undoubtedly the commentary track by none other than Wes Craven himself! To be fair this is actually pretty good and Craven goes into a lot of detail when explaining the ideas behind certain scenes. He also does a good job of remembering the cast's names (how many of them are still working?), although he does forget one person! Unsurprisingly he remembers his daughter, who made her feature debut in this film in an extremely small role.

The rest of the extras are pretty standard fare and comprise of three multi-angle storyboard versus scene sequences and a theatrical trailer. Not going to set the world alight I'm sure you'll agree. It would have been nice to see the video for Megadeth's track 'No More Mr. Nice Guy', which was the title track to the film on its release and featured footage from the movie. I can remember watching it on some late night TV show very clearly back in mists of time, sandwiched between Married With Children and The Hitman & Her. I know, I'm getting old.

Shocker is an average picture that is starting to show its age. The special effects aren't all that special, not even for 1989, but the story is interesting and offers a new twist on Craven's dream obsession. It is different enough from the Elm Street movies to stand on its own, but it never reaches anywhere like the greatness of some of those movies. I wouldn't recommend this to anyone unfamiliar with the film, but if you enjoyed the film on its release then this could be a nice little trip down memory lane. To be honest, Shocker is probably one for rental rather than retail.
posted by Chris Gould on 21/12/2002 00:13