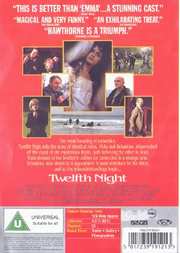 Back Cover of Twelfth Night

DVD
Much Ado About Nothing (UK)

DVD
Into the West (UK) 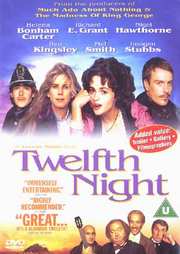 Synopsis:
Shakespeare`s comedy of errors is adapted for the screen by Trevor Nunn and stars a host of famous British actors (including Ben Kingsley, Nigel Hawthorne and Mel Smith). Twins Viola and Sebastian are shipwrecked on the coast of Illyria and separated, each believing the other dead. Viola disguises herself as a man, and soon Sebastian is being mistaken for her and vice versa. Matters are complicated when the beautiful Olivia falls in love with Viola, whom she believes to be male.

It is over a quarter-century since I was one of a class of slightly bored teenagers who had to study this play for an English exam. Shakespeare and exams; big yawn, right? Well, we had fun, because a lot of what we did was reading the play, and even acting it a bit, and it is a not-too-serious story with a lot of humour, and quite a bit of thought-provoking stuff about gender.
So we start with a pair of twins, seperated in a shipwreck, and the girl decides to disguise herself as her dead brother. She enters the service of the local Duke, and is sent as messenger as he courts a wealthy noblewoman. You may easily imagine the confusion and heartache which ensues as people fall in love, drunken relatives make trouble, and it all rushes headlong into the territory of the daytime soaps.
Luckily, this is the original, not some pale copy, and Shakespeare wrote a better script. As seems usual these days, the story is told in more modern dress, more-or-less late-Victorian, and it isn`t the full text. But it`s close. Yes, you wonder how on earth anyone can confuse the twins, though they`re close; DVD is almost too good a medium. And you`re just swept along with the story.
Good versions of Shakespeare always have a market, and this is a must-buy for anyone dealing with the play at school. It`s also an entertaining product, not for all-the-family in the Disney sense, but fine for the older kids as well as aged parents. (Note for parents: avoid yellow stockings, cross-gartered.)
The one thing this will not do is show off your DVD player. It looks, and sounds, good. But it is a fairly ordinary film from the technical point of view. You`re getting better pictures than you can from VHS, and some minor extras such as the trailer. So what? Look at the price, you`re not paying the usual premium for DVD.
posted by Dave Bell on 3/2/2002 21:01