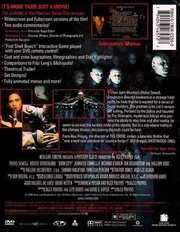 DVD
Crow, The Collector`s Series (US)

DVD
Last of the Mohicans (DTS) (US) 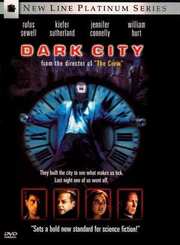 They built the city to see what makes us tick. Last night one of us went off
Certificate: R
Running Time: 96 mins
Retail Price: $24.95
Release Date:
Content Type: Movie

Synopsis:
When John Murdoch (Rufus Sewell) awakens in a strange hotel room, he finds that he is wanted for a series of brutal murders. The problem is he can`t remember a thing.

Pursued by the police and haunted by The Strangers, mysterious beings who possess the ability to stop time and alter reality, he seeks to unravel the twisted riddle of his identity. But in a city where reality is the ultimate illusion, discovering the truth could be fatal.

When I saw this at the cinema the thing which struck me most was Jennifer Connelly. Not that suprising really, as she is certainly very striking. However, once I`d gotten past the whole babe thing I realised that the film is actually very good. A dark thriller about a man with no memories trying to peice together his life while strange events occur around him. As the film progresses he finds out he is a wanted man, but who are the strnagers who seem to want to control everything?

The acting in the film is superb, Rufus Sewell plays the part of a man none too sure where he has come from or where he is going to, and even Keifer Sutherland puts in a good, if slightly hammy performance as the cringing german doctor.
Watch out for great performances from Ian Richardson (from the UK series house of cards) and Richard O Brien (from rocky horror show and the crystal maze) as the baddies of the piece.

The video on this disc is also good. The film is dark, and therefore the picture can get a trifle difficult to see at times, but this is more of a fault of the film if anything (best watched in a pitch black room). But everything is crisp and clear, and complements the films excellent cinematography.

The sound is a fairly standard 5.1 mix, not too exciting nor too dull, though not much use seemed to be made of the rear channels.

The extras on the disc are well worth a look, especially the commentry from Roger Ebert, even if he is a bit gushing in his praise a little too often. He makes comparisons to other films such as metropolis, and also gives us an angle into the films subtext. Another commentry come from Alex Proyas, the director, who is ok, but never for me lives up to the Ebert commentry. Other extras on the disc are fairly standard fare, and may be mostly skipped over.

Overall, a very good film, thought provoking and well directed. Special effects are good, and the world created is beleivable and interesting. There are people who say this film may have influenced the matrix, and I think they might be right, but this is a film which also has its own identity. And you get the bonus of Jennifer Connelly. Buy it today...
posted by Chris Allen on 25/6/2000 15:28
8 / 10

A truly dark movie that takes place in a city - hence "Dark City".
The movie is a futuristic thriller about people loosing their identities, loosing themselves, in the midst of an alien race who`s doing some nasty things to their lives.
One cannot help feel how many ideas the creators of "The Matrix" took (aka - stole) from this movie. While it has fewer special effects, it`s much darker than "The Matrix". And also better in a certain way.
The video transfer (both the widescreen and the butchered fullscreen) is very good. There are no compression signs and the picture is clear of any defects. The colors are nicely saturated and help contribute to the dark (and also damp) atmosphere in the city.
The DD 5.1 soundtrack is very good. The surrounds are used throughout the movie and create a creepy sound envelope.
The menus are animated with sound.
The extras include 2 commentaries (Roger Ebert`s commentary is superb), a picture gallery, a review and a comparison to "Metropolis" and an interactive game.
Bottom line, a dark thriller with a great script and several unique ideas which is worth a 2nd and 3rd viewing.
posted by Zvi Josef on 8/10/2004 00:55