Review of Casino
added by
Chris Cox
Places to Buy 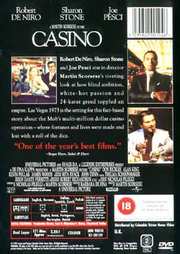 Back Cover of Casino

DVD
Bringing Out The Dead (UK) 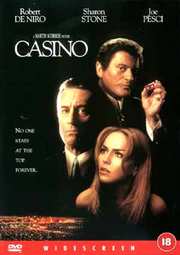 Las Vegas 1973 is the setting for this fact-based story about the Mob`s multi-million dollar casino operation - where fortunes and lives were made and lost with a roll of the dice. Robert De Niro, Sharon Stone and Joe Pesci star in director Martin Scorsese`s riveting look at how blind ambition, white-hot passion and 24-karat greed toppled an empire.

Using endlessly fascinating style, a riveting plot and some compelling performances, America`s greatest living director takes on the high rollers of Las Vegas, and wins by a knockout.

The first misconception is that this is merely a longer remake of GOODFELLAS. The earlier film dealt with the little guys, this deals with the top men in the organisation - wheras the wiseguys on the streets of New York made thousands, these men make millions. The second is that it is too long. On the contrary, Scorsese uses the extra length to add depth to the characters, and the final hour is mostly about the interactions between Pesci, DeNiro and Stone, which end in tragedy.

Few other film makers have such compassion for the bad men in society, and it`s noticable that the violent death of a character near the end is filmed close in and is genuinely upsetting. All the characters in the film are vile, but Scorsese makes them more than the sum of their actions. In GOODFELLAS, Pesci was a violent clown, but here he is a violent man who is also a loving father and a sensitive lover.

Constantly, Scorsese makes us gasp at his visual wizardry. One writer claimed that the film had "too much style", which is a bit like saying that a film is too well made and is utter nonsense. Every single bit of visual magic is used to elaborate the central theme of extravagent emptiness. The music is excellent as well, ranging from Bach to Devo.

This Region 2 disc is disappointing. It isn`t anamorphic, which the R1 is, and the picture quality is adequate but not stunning. The 5.1 soundtrack is excellent, however, and it`s quite a thrill to have "St Matthew`s Passion" blasting out in Dolby Digital. There are, unfortunately, few extras, beyond brief production notes and the theatrical trailer. When is Scorsese going to do a commentary for one of his own movies ?

A mixed Bag from Scorsese.

The picture is supposed to be soft as the original master is too.

I might cause a bit of controversy here, but I feel that Casino is a far superior film than Goodfellas. I thought that Goodfellas was too jokey in places and so was hard to take seriously. There`s no such problems with Casino. Everybody plays their roles to perfection, Marty Scorsese`s direction is peerless and Nicholas Pieggi`s script drags us into the Las Vegas scene. We begin to feel that we know these characters personally.

A good 5.1 track for a film that has a great soundtrack.

This DVD is Great. It starts in 1974 when Sam `Ace` Rothstein (Robert De Niro) is given the Tangiers Casino in Las Vegas to run. The mob are running an operation through several Las Vegas Casinos and get all of the money from them every month. Rothstein is an top gambler who always wins when he places a bet. After he takes over the Casino, he gets huge amounts of cash through it and everything is great for him in his job and his life outside the casino. But soon afterwards everything turns bad after Ace`s friend Nicky Santoro (Joe Pesci) arrives on the scene. Santoro is a violent gangster who badly wants to get his hands on Las Vegas. All of his robberies and killings make the Police and FBI keep a watch on him everywhere he goes. Rothstein also has problems with his wife (Sharon Stone) and everything falls to the bottom at the end of the movie. The DVD is very good with a few extra features. It`s too bad that there isn`t more extras included because it would have made this disc really amazing.
posted by LFC_Lad on 26/3/2003 15:53