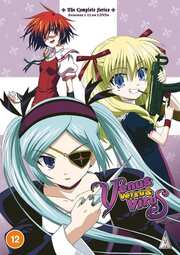 Review for Venus Versus Virus Collection

I’m a cynic me at the best of times, but sometimes coincidences are such that you can’t help but allow expectations to be coloured by that cynicism. This spring, MVM have released three shows on DVD, all of them TBS titles, all of them originally released by ADV in their final years, and all of them picked up and re-released by Funimation after ADV went out of business, and whose discs MVM are using for their releases. It seems like one of those batch licensing deals, where a company gets the titles that they want, but are compelled to take a lesser title as part of the deal. Both Kanon and Air are fan favourite, Key Visual adaptations, two of the finer shows of that genre. Venus Versus Virus is not. Like I said, lowered expectations. 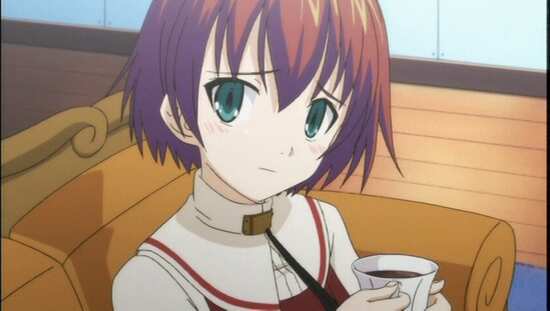 It’s a dangerous world. There are monsters out there that no-one can see, Viruses that ‘infect’ people and devour their souls. Although there are some, rare people that can see the Viruses, and ironically, they’re the people that are most targeted by the monsters. And there are people that battle the Viruses, notably the members of Venus Vanguard, a company operating behind the facade of an antique shop, led by a girl with an eyepatch named Lucia, her maid and her butler. They’ve also come up with the antibodies, which when loaded as bullets in special guns can target and destroy a Virus. Also working with them is an unlikely and unassuming school girl named Sumire. She’s timid and shy, hardly the kind of person who you’d see fighting a supernatural menace, but she too is unique. The antibody bullets are harmless to normal people, deadly to Viruses, but if Sumire is hit by a bullet, it awakens a dark, violent side of her personality, lethal to Viruses. The only problem is that she goes berserk, lethal to all, enemy and ally alike. 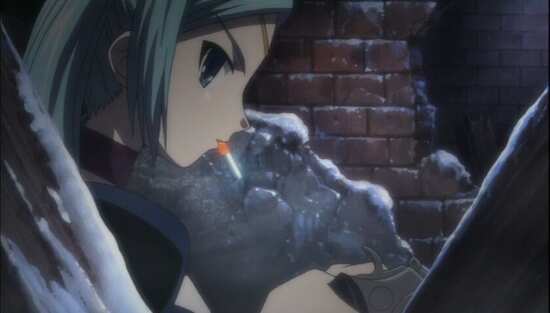 12 episodes of Venus Versus Virus are presented across two DVDs from MVM. 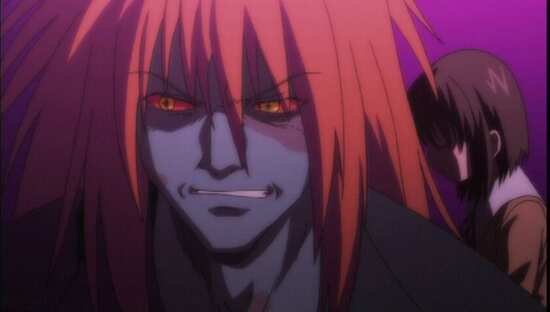 Venus Versus Virus gets a 1.78:1 anamorphic widescreen NTSC transfer on these discs. It’s another early digipaint show, full of flat colours and low resolution detail. The image is clear and sharp, colours are consistent, and the animation is smooth, but unless you have an old CRT TV to watch this on, there will be some up-scaling involved, and the show is old enough to be more affected than most by aliasing, stair-stepping on line art. In terms of character and world design, this is a pretty generic looking show, doing little to stand out. 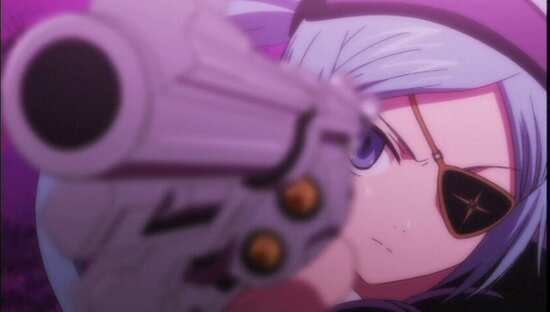 You get the choice between Dolby Digital 2.0 Stereo English and Japanese, with optional translated English subtitles and signs. I stuck with the Japanese version and found nothing to fault with the technical experience, the actors were suited to their roles, the action comes across well, supported by an appropriate music soundtrack, and the subtitles are timed accurately and free of typos. And to be exotic, “Virus” gets the English pronunciation as opposed to the usual Japanese “Veerus” pronunciation. 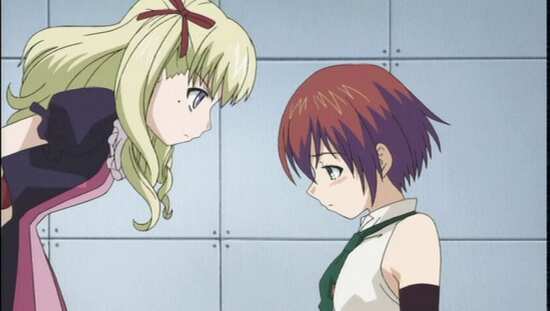 The discs boot to static menus, and jacket pictures are visible on compatible players when the discs aren’t spinning.

The extras are on disc 2, and amount to the textless credits and nothing more. 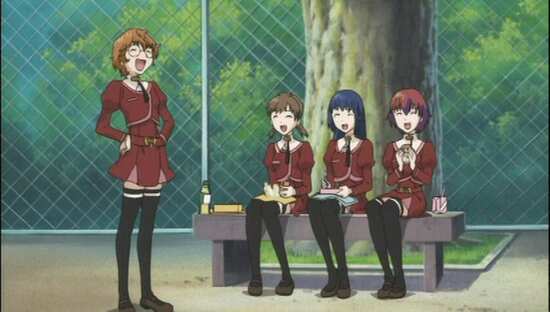 I haven’t had as much of a chore watching an anime for review for a long time, maybe as far back as when I reviewed Samurai Deeper Kyo. I just didn’t like Venus Versus Virus; it’s a show that I found to be worse than mediocre, dull, juvenile, poorly animated, and wholly unsatisfying. Spoilers... Venus Versus Virus is one of those shows that jettisons its initial premise to do something completely different, and it also ends where it begins (the opening scene is a preview of the conclusion, injecting unearned drama right at the start to cheaply buy audience commitment), and that climax is one of those offensive non-endings that producers offer in the vain hope that there will be a second season to continue the story. Here, there is not even that chance, given that most of the story is done and dusted with in the series runtime, and all it would have taken was maybe a minute of animation to give a conclusion one way or the other. It’s a last minute pretension to narrative quality that the rest of the series never even approached. 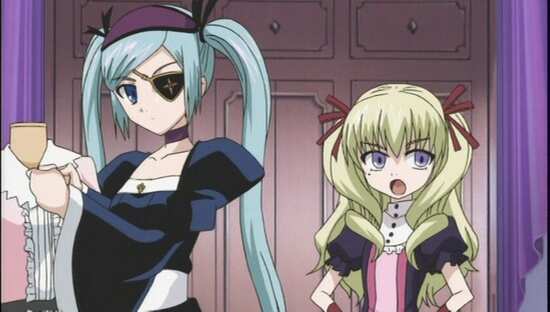 The show begins with this premise about Viruses, evil spirits that attack humans, turning them into Viruses in turn. The show’s protagonists, Lucia and Sumire work together with guns and ‘antibody’ ammunition to kill the Viruses (ghosts by any other name). Antibody bullets don’t affect humans, but for some reason awaken a berserker rage in Sumire, who otherwise is the wimp compared to Lucia’s badass demon hunter. When that happens, Sumire can kill Viruses barehanded. 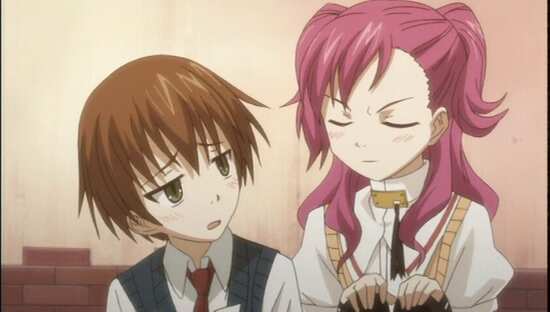 That’s the premise, and it’s ditched halfway through to tell a story about Lucia’s past and how she was orphaned when her father Lucif, turned evil and killed her mother Lilith in the hope of harvesting her ‘fragment’, the crystal within a human that signifies the soul. Lucif wants to use fragments to open the door to the True World. He failed at first, but for some reason, he believes that the fragments that Lucia and Sumire possess will give him a second chance, and he has been playing a Machiavellian long game to turns the unlikely friends against each other, and to achieve his ambition. 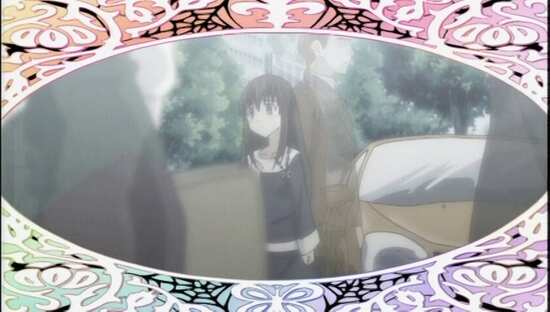 Either premise might have been interesting, but Venus Versus Virus squanders it all with its juvenile and wayward tone. It’s never as dark as the story really needs to be, and instead has the childish and watered down approach that you would expect from a Saturday morning cartoon aimed at children. There are plenty of childish supporting characters in the cast, and lots of running gags. One of Sumire’s school friends, Nene is the perky upbeat best friend, and her little brother is always hiding behind her skirts, cinema tickets in hand, always trying and failing to stammer his love for Sumire into asking her out on a date. And for some reason, everyone associated with the supernatural world, and related to Lucia, has a name beginning with L. It quickly gets confusing. 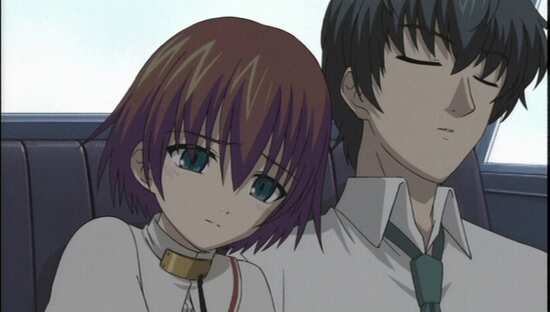 I wanted to give this show my full attention, but it was a rare episode that didn’t put me to sleep. That’s why it has taken me so long to get this review out. I’ve had to go back on subsequent nights to revisit an episode, and that would only make dislike the show more. If you can handle a cheap and cheerful, pseudo spooky show, replete with clichés and by the numbers storytelling, maybe you’ll be able to elicit some enjoyment from Venus Versus Virus, but I have to surrender at this point. Venus Versus Virus has beaten me into submission. Now I have to go and find the will to live again.