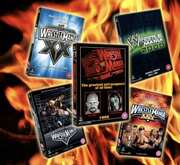 For the first time in a long while a lot of these WWE PPVs are available and though it is an odd selection I will not deny that I did not enjoy them all. This was a nice trip down memory lane. Personally I would have preferred a 'Special Edition' versions of 6, 13, 15 and 17, but I will not sniff at reliving some great wrestling moments.

The events released are Wrestlemania 14, 16, 20, 22 and 24, but unfortunately I did not recieve Wrestlemania 20 as I was curious as to how they would address the 'Benoit' situation and looking at some of the screenshots of boxart it is simply a case of not mentioning him at all, which is strange.

It should also be said with these sets that some are not complete with Wrestlemania 16 missing a disk of Special Features and 20 missing its original third disk which featured the excellent 'Mania of Mania' documentary. However, thankfully there is no blurring of the old WWF logos which plagued a lot of older releases and so at least everything looks great.

As they are all being sold separately you may want to consider whether you want to own them or not. Personally it was great to complete my collection of missing sets, but some may not be as essential as WWE is trying to make you believe. It is odd that no new extra features from those involved are included like they did in the past for Wrestlemania 3, but there is certainly some high points on each disk.

This event features eight matches a great match for the Intercontinental Championship between The Rock and Ken Shamrock, a crazy Dumpster Match for the Tag Team Championships between New Age Outlaws and Cactus Jack and Chainsaw Charlie.

The two matches for the European Championship Match between Triple H and Owen Hart and the Light-Heavyweight Championship Match between Taka Michinoku and Aguila are both fine, but nothing memorable. The Mixed tag match between The Artist Formerly Known as Goldust and Lukan Vachon against Marc Mero and Sable is mad and entertaining, but very bizarre. I also enjoyed the tag team Battle Royal, but maybe it was just because of the appearance of Legion of Doom.

Undertaker against Kane was one of the biggest matches of the night and had a really great story that went into it. It is not a great match and the two had better matches later on, but it does have its moments.

Finally, the match which almost cemented 'The Attitude Era' saw Stone Cold Steve Austin against Shawn Michaels with Mike Tyson as the Ring Enforcer. This was again a great build of a match and a great match between the two.

It is a shame that there are no extra features and though it is great to relive this PPV unless you don't have this in your collection you will need to think hard about whether this would be worth it.

Over nine matches this could almost be one of the best Wrestlemania's of all time. It is not surprising that this event was signalled out for re-release.

One of my favourite matches ever is the Two Fall, Triple Threat between Kurt Angle, Chris Jericho and Chris Benoit. It is understandable why this match is not a match that is talked about, but I do think the chemistry between these three men, all three on the cusp of main event status, is just fabulous.

The PPV does have its downside with an awful eye candy match between Terri and The Kat, a dull match with Al Snow and Steve Blackman against Test and Albert, but it does have some other highlights such as a crazy Battle Royal for the Hardcore Championship which was a precursor to all the 24/7 Madness we have today.

X-Pac and Road Dogg against Rikishi and Kane is a fun match as is the Radicalz against Too Cool and Chyna and even the Pimptastic match pitting The Godfather and DLo Brown against Big Bossman and Bull Buchanan was not a bad match.

Of course the match which stole the night was the original Triangle Ladder Match for the WWE Tag Team Championships. This was the first time we saw Edge and Christian, The Hardy Boyz and The Dudley Boyz pitted against each other at the same time and it rightfully won many Match of the Year awards.

It is a shame that the event ends with the Fatal Four-Way match. This is not a bad match, but in comparison to that ladder match nothing else came close, for me that Ladder match was the Steamboat/Savage of this generation and one of the few times when the main event should not have been the WWE Championship.

That being said Triple H, Big Show, Mick Foley and The Rock are all fantastic, it just didn't need the 'McMahon in every corner' gimmick.

Wrestlemania 16 is a fantastic PPV and one that I really enjoyed watching again. It is a shame that these sets are not being re-released with some extra features or even a look back at these events by those involved. If you don't own it, this is definitely one to pick up and if you have never seen that tag match then you definitely should get to it.

This was a pretty great PPV and one that has a good number of matches and moments and there are very few lowlights which is astonishing.

The Money in the Bank match was fantastic as always and this was definitely one of the best examples of this match. Chris Benoit against JBl for the US Championship is great and they both work well together. The Hardcore match between Edge and Mick Foley is crazy and one of the best from either and one of Foley's best matches of all time.

The Triple Threat for the World Heavyweight Championship between Kurt Angle, Rey Mysterio and Randy Orton would have been great if they hadn't decided to put a picture of Mysterio holding the belt on the cover of the DVD. This was not a match I remembered, but the three worked well together and it was an emotional climax.

Mr Mcmahon against Shawn Michaels in a No Holds Barred match is a match that shouldn't work, but by God it is one of the best Shawn Michaels match and a worthy Match of the Year winner. I expect excellence from HBK, but I was stunned that he could get this kind of match from Vince McMahon.

This PPV also includes my favourite women's match of all time with Trish Stratus putting her Women's Championship on the line against her crazy fan Mickie James. The storyline of this match was great, the match was the icing on the cake with both getting the best from each other.

It is not all great though as Boogeyman against Booker T was awful, the Casket match between Undertaker and Mark Henry was not as entertaining as it should be and the tag championship match between Kane and Big Show and Carlito and Chris Masters forgettable. The Playboy Pillow Fight between Torrie Wilson and Candice Michelle is only really worth watching to view these two beautiful women, but nothing more.

Finally, we have the main event in which we expected Triple H to unseat the stale John Cena and yet someone obviously did not get this message. What we instead got was a fairly good match, with an utterly underwhelming ending. This such a shame.

Unlike the other sets, this one comes with a number of extra features including the 18-Man Interpromotional Battle Royal which is fine. John Cena on Raw after Wrestlemania was really a reaction to the fans the night before, but should have been Cena's turn on the fans to make him more interesting.

The inclusion of Saturday Night's Main Event is great and this was almost a PPV in itself with some great matches and moments. Finally there are also some extra before and after match promo pieces which are great. It is sad that WWE does not do this anymore as this is often a small extra, but a great one nonetheless.

The whole WWE Hall of Fame Induction Ceremony is included which is possibly one of the strongest line-ups: The Blackjacks, Verne Gagne, William “Refrigerator” Perry, Sensational Sherri, Tony Atlas, Mean Gene Okerlund, Eddie Guerrero and Bret “Hitman” Hart. All of these (William Perry aside) deserve to be honoured in the Hall of Fame and it was sad to remember Eddie Guerrero and a shock to see hell freeze over and Bret Hart mend the bridge between himself and the WWE after Montreal.

Wrestlemania 22 was a great PPV and if you don't own this already I would definitely recommend picking this one up.

This event is such an odd one and most of the night is just plain or average.

The Belfast Brawl between Finlay and JBL is fine, but nothing special. Batista against Umaga again has its moments, but not a match that I remember and the ECW Championship match is so short you wonder why they bothered.

The worst two matches of the night is a toss up between the overhyped Big Show against Floyd Mayweather which was just very awkward and obvious or the Playboy Bunnymania Lumberjill match which was just an excuse to see sexy women and not a great match by any stretch of the imagination.

Thankfully the Money in the Bank was fantastic as always with everyone involved feeling at times like they could win. This makes a change and the winner was thoroughly satisfying.

The main event Triple Threat for the WWE Championship between Randy Orton, Triple H and John Cena could have been great, but unfortunately the match of the night was obviously Ric Flair against Shawn Michaels. The title match was fine, just nothing special and did not have the emotion of the other match. Flair/HBK was just such a wonderful match and anyone who doesn't feel something at the end is dead inside.

Only two extra features are included the 24-Man Battle Royal for a shot at the ECW Championship which the cover already spoils for you.

Also included is the Hall of Fame Induction Ceremony is included which this year included Jack & Gerry Brisco, Gordon Solie, Mae Young, Eddie Graham, Rocky Johnson, Peter Maivia and Ric Flair. This was a strong class and seeing Flair go in was a very emotional and deserving moment.

Wrestlemania 24 is a case of a two match event aided with a wonderful Hall of Fame. It is such a shame that so much of the event is merely average and I am not sure whether I can recommend it on the basis of two matches no matter how great they are.